Are Women’s Rampant Egos Driving Us to the Doctor? - Ms. Magazine
Skip to content 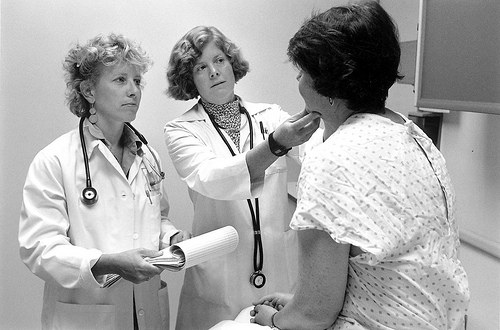 Why do women visit the doctor more frequently than men do? Because we believe we are extraordinary, therefore our illnesses must be extraordinary too.

So says “Sick is the New Black,” a report in the December issue of Marie Claire. Its startling finding is based on “Kate,” a former co-worker of the journalist, whose every cough or itch reportedly sent her rushing to the clinic. Kate “happened to use doctors the way Beyoncé wannabes use YouTube—to prove they’re somehow special,” writes journalist Sarah Z. Wexler. (We must take her word for that, as for so many of her claims.)

The story asks, “Why are so many women freaking out about getting sick?” But it doesn’t establish that women are freaking out about getting sick. It merely notes what we’ve known for many years, that women seek health care more frequently than men do and that women’s rate of health care usage has increased: 73 percent of women have contacted a health professional in the last six months versus 59 percent of men (according to the National Health Interview Survey (PDF), Centers for Disease Control, 2010).

Wexler’s first egregious act is assuming that men’s health care usage is the neutral number, the baseline, against which women’s behavior must be compared and found frivolous. She does not consider the possibility that women’s behavior is closer to the ideal, that men are not seeing their doctors enough. This, though, is the discussion among physicians and researchers who cite men’s underuse of health care services as a factor in the widening gap in life expectancy between men and women since the 1920s.

Granted, it’s possible to make the case that women might be freaking out about getting sick, if freaking out can mean worrying with good reason. Almost two-thirds of women (versus 52 percent of men) recently reported delaying or skipping health care in the past year because of its cost, and 42 percent (versus 33 percent of men) had substituted home or over-the-counter remedies for doctors’ visits (according to the Kaiser Family Foundation Health Tracking Poll (PDF), 2012). Far more women aged 25-34, a prime Marie Claire cohort, are either uninsured (24 percent) or reliant on Medicaid (30 percent) than have private health insurance (29 percent), says the Kaiser Women’s Health Survey, 2011. If women are freaking out, it’s probably because they can’t afford to see their doctors.

Yet Wexler’s unwavering focus is on women’s 34 million “extra” doctor visits a year. She suggests that direct-to-consumer TV advertising and “cable news virus-mongering” might contribute, without offering evidence that they freak out women more than men, or considering that women’s behavior might be rational. But these explanations are gestures, anyway, because the real reason for those extra visits is that thing about Kate feeling too special to have an ordinary cold. “This mentality rings true for a lot of women,” says Wexler. To substitute for them, she quotes another of her acquaintances, an Overworking New York High Achiever (ONYHA): “When my husband gets sick, I think he only has a cold and is being a big baby. But when I get sick, I’m gravely concerned it’s life-threatening, like cancer.” (Why this necessarily indicates arrogance rather than anxiety isn’t clear.)

Since we’re going the anecdotal route, I or pretty much any other woman in the world, could provide a slew of personal stories “demonstrating” the opposite theme: tales of husbands with ingrown toenails and advanced cases of self-pity retiring to bed while their hapless wives with 105-degree fevers and broken legs give birth, wallpaper the nursery, wrestle and spit-roast wild pigs. This is the dominant sexual-politics-and-health narrative, and though its dominance doesn’t make it true—

You know what? It’s true.

The evidence for why men underuse medical services is limited but certainly a flight of steps up from Wexler’s on women. A small Canadian study in 1999 found that men are much less likely than women to discuss their health socially, and tend to seek health support from their partners rather than physicians. They are embarrassed at having to talk to female receptionists or care providers. They tend to wait until they’re unarguably sick. A Rutgers study in 2011 found that men with a strong sense of machismo are half as likely to seek preventive health care services as men with moderate beliefs about masculinity. And unlike women, with our regimen of birth control consults and pap smears, men aren’t accustomed to regular doctor visits from early adulthood. “A third haven’t had a checkup in more than a year. Almost half don’t even have a doctor,” wrote Esquire in its 2011 men’s health survey.

If these guys want additional reasons to avoid doctors’ appointments, Wexler provides one: Medical care is itself a source of infections. Right. Overall, though, low use of primary care services is associated with worse health outcomes. People who don’t see their doctors tend not to take care of themselves in other ways, and they miss the warning signs of serious disease. Men are more likely than women to be hospitalized for preventable illness, often at great expense. Consequently, increasing the use of primary care among those who tend to avoid it is regarded as key to improving health and reducing health care costs.

Perhaps Anne Fulenwider, the incoming editor-in-chief of Marie Claire, will respect her readers enough to accept that a health report based on anecdote and assumption is not a health report. Maybe some roguish sub-editor already senses this. “Sick is the New Black” includes highlighted statistics that appear to argue against the premise of the story: “200 thousand Americans hospitalized every year for the flu or flu complications” seems to rationalize Kate’s dash for help at the first hint of symptoms. If only this conflicted (or just confused) sub-editor had also come up with a headline that didn’t smack of racial denigration. Even as a quip about fashion, “Sick is the New Black” fails. Why mock your readers’ health care practices? Sick is saying sick is the new black.

The biggest irony comes when the story blames Kate and the ONYHA for keeping us waiting for appointments: “21 minutes, the average national wait to see a physician.” If there’s anything in this article that indicates an inflated sense of self (other than using a national platform to sneer at a former colleague) it’s the notion that waiting 21 minutes to see a 21st century western doctor is unacceptable. There’s nothing like a global or historical perspective, even an uninsured American perspective, to expose the real self-awareness gap.