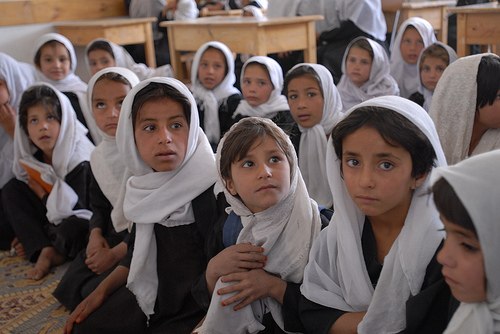 She was a volunteer for a polio vaccination campaign in the eastern province of Kapisa province. Afghanistan, is one of just three countries in the world, along with Pakistan and Nigeria, considered a polio-endemic place, so there’s been a concerted effort to administer preventive medicine to millions of children. Anisa, a 10th grader at Mahmoud Raqi Girls High School was just helping out. And maybe that’s why she was shot to death on Sunday, with local authorities suspecting Taliban gunmen of the horrific crime.

The Taliban, you see, is against polio immunizations–which, of course, could save some of their own children from a lifetime of paralysis. But they choose to believe that the health campaign is a coverup for espionage, as was the CIA-backed fake hepatitis vaccine campaign that was run in the town where Osama Bin Laden was suspected of being holed up in order to collect DNA samples and locate children of the Al Qaeda mastermind.

Still, denying children protection from a disease that can turn into an epidemic? And killing a child for their connection to the vaccination campaign? Or was Anisa targeted simply because she was a girl attending school, which the Taliban abhors? That’s why they shot Malala Yousufzai in October, who miraculously survived.

Our hearts go out to Anisa’s family, to her classmates and to all the girls in Afghanistan and Pakistan who want nothing more than to be full participants in the world.

Photo of Afghan schoolgirls by Flickr user DVIDSHUB under license from Creative Commons 2.0