Reduction in Violence Shows That VAWA Is Helping - Ms. Magazine
Skip to content 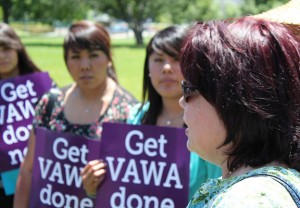 Women’s safety advocates welcome last week’s report of a steep and long-term decline in intimate-partner violence in the United States and say it’s a good reason for lawmakers to reauthorize the Violence Against Women Act before the end of the year.

“It doesn’t surprise me that intimate-partner violence cases have declined dramatically,” said Kim Gandy, CEO of the National Network to End Domestic Violence, in a phone interview.

“These numbers prove that the Violence Against Women Act is working and effective,” Gandy added, referring to a 1994 law enacted with bipartisan support that provides critical services for survivors of sexual assault and domestic violence.

Renewal of the bill is on the agenda for Congress now that the election is over.

In April, a version of the Violence Against Women Act was approved by the Senate, despite strong Republican opposition to certain provisions, such as expanding protections to same-sex couples, continuing to allow victims who are undocumented immigrants to claim temporary visas and permitting Native American rape victims to prosecute their non-Indian assailants. The latest version in the House also would expand free legal assistance to victims of domestic violence and extend the definition of violence against women to include stalking. Republican House members remain opposed to these provisions.

One in every four women will suffer domestic violence in her lifetime, according to the Centers for Disease Control and Prevention.