South Korea Elects Its First Woman President, But What Next? - Ms. Magazine
Skip to content 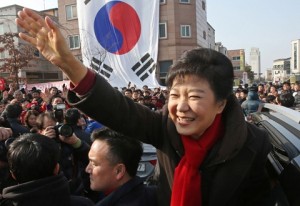 South Korea has elected its first woman president, Park Geun-hye, in a closely fought election. Taking the presidency by a narrow 3.5 percent margin, the conservative Saenuri party’s Park will be moving back into the presidential house she called home as a young girl.

Park’s father was Park Chung-hee, a polarizing figure in Korean politics who pushed South Korea into being an economic powerhouse at the cost of individual freedoms. With authoritarian cruelty, he tortured dissenters and rewrote the nation’s constitution to bolster his own power in the 1960s. His strongman tactics earned him many worshipers and many critics, a national turmoil that his daughter was able to witness firsthand. You could say Park was groomed for her presidential ascent, given that she became the acting First Lady after her mother was murdered in 1974, and continued to be engaged in Korea’s political realm after her father was assassinated five years later.

Park will be coming into power at a time when many citizens are worried about the country’s future. The cornerstone of Park’s campaign was economic reform, a promise she will have to make good on in the coming term.

We can only hope her zest for the economy doesn’t eclipse the desperate need for gender equity in a still very patriarchal South Korea. She has a unique opportunity to use the legitimacy her pedigree lends her to transform South Korea into a more egalitarian society. The World Economic Forum ranked South Korea 108th in gender parity, putting it one slot below the United Arab Emirates. On average, women earn 40 percent less than men, hold only 12 percent of managerial positions at 1,500 major firms and fill only 15 percent of the seats in parliament.

In her run, Park pledged to ignite a women’s revolution if she was elected, promising financial aid for childcare and incentives for firms to hire more women. Now that she has made history by winning the presidency, let’s hope her campaign promises weren’t just political pandering.

Photo of Park Geun-hye courtesy of gameboybb100 via Creative Commons 2.0