Some Musicals Are More Feminist Than Others - Ms. Magazine
Skip to content 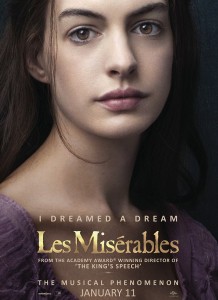 While Les Misérables is not your typical musical–or, as this Guardian review puts it, “There’s no dancing, there are no jazz hands and there is next to no speech”–it is typical of the genre in that, like opera, it includes more female characters than do many plays, movies and novels. Regardless if this is due to the fondness for female voices or to the swoon-inducing love ballads adored by so many, this viewer is thankful for the diverse female characters so wonderfully played by Anne Hathaway (Fantine), Amanda Seyfriend (Cosette), Samantha Barks (Éponine) and Helena Bonham Carter (Madame Thénardier).

The film adaptation, based on the musical (seen by over 60 million people), which is itself based on Victor Hugo’s novel, arguably heightens the proto-feminist elements of the original narrative as it allows for a more close-up, more harrowing depiction of the key female characters, all of whom are “miserable” for justifiable reasons.

Though the film has been referred to as a “lobotomized opera,” it can more aptly be described as an operatic musical that not only focuses on macro problems of human existence–morality, freedom, power, forgiveness–but also on how these problems play out at the micro level, particularly how the macro power of men effects women on a micro level. As noted at Democratic Underground, Victor Hugo gets

the plight of women in his society, especially the grisettes (working class young women) and prostitutes, and how they were helpless against not just men of power, but men in general, and how nice poor girls could so easily be discarded and have [their lives] ruined because of becoming pregnant or rebuffing sexual advances.

Fantine is the key character to have her life ruined in such a manner. Abandoned by the man who impregnates her, she is working in the 19th century version of a sweatshop when we first meet her in the film. She ultimately turns to sexual slavery so as to continue sending money to the unscrupulous caretakers (the Thénardiers) who, unbeknowst to her, are abusing and exploiting her young daughter, Cosette.

Fantine is portrayed sympathetically in the text and musical, but the film adaptation emphasizes the horrors of forced prostitution, something the musical renditions of the song “Lovely Ladies” frequently belie. Often performed in an upbeat, jokey manner, in the film the song instead becomes a battle cry against sexual slavery, with the costuming, make-up, sets and lighting bringing the horrors behind the lyrics to life as the sickly, starving, cold, tattered and abused women sing:

After her hair has been cut, her teeth removed and sold, Fantine joins the song, singing,

Come on, Captain
You can wear your shoes
Don’t it make a change
To have a girl who can’t refuse
Easy money
Lying on a bed
Just as well they never see
The hate that’s in your head
Don’t they know they’re making love
To one already dead!

Widely lauded in the role (as here, here, and here), her rendition of “I Dreamed a Dream” further encapsulates the pathos and desperation of her character–something which is sometimes lost in more “Broadway” renditions of the song (a la Susan Boyle).

What I did was I tried to get inside the reality of her story as it exists in our world. … I read a lot of articles and watched a lot of documentaries and news clips about sexual slavery. And for me, for this particular story, I came to the realization that I had been thinking about Fantine as someone who lived in the past, but she doesn’t. She’s living in New York City right now. She’s probably less than a block away. This injustice exists in our world, and so every day that I was her, I just thought—this isn’t an invention. This isn’t me acting. This is me honoring that this pain lives in this world and I hope that in all our lifetimes—like, today—we see it end.”

Regardless of what can be said about Hathaway’s weight loss for the role (critiqued here), her framing of Fantine as a sexual slave, NOT a prostitute, is key, as it refuses to glorify or joke about what is so often swept under the rug regarding sex work: that the majority of women do not “choose” it but are forced into it–a realization emphasized by Hugo but often lost in musical renditions. Hugo writes of Fantine,

What is the history of Fantine? It is society buying a slave. From whom? From misery. From hunger, from cold, from loneliness, from abandonment, from privation. Melancholy barter. A soul for a bit of bread. Misery makes the offer, society accepts … it is said that slavery has disappeared from the European civilization. This is a mistake. It still exists: but it weighs now only upon woman, and it is called prostitution.

The film, like Hugo’s novel, blames society for sexual slavery, rather than individual men or women. Each also portrays her “choice” as that between life and death for her and her daughter.

Hugo’s progressive view of sexual politics, as well as his critical attitude towards “polite society” (discussed here) imbue his work in other Les Mis plotlines as well–as with his depiction of the vengeful Inspector Javert (Russell Crowe) and the valiant prisononer 24601, Jean Valjean (Hugh Jackman),  imprisoned 19 years for the crime of stealing bread. Though these two males are at the center of the story, the females are just as (if not more) memorable (and certainly outperform and out-sing Crowe in his bombastic version of Javert).

Cosette, both as the child abused by the Thénardiers and then as the adult who falls for the revolutionary Marius (Eddie Redmayne), is also a micro picture of a macro problem–the abuse of female children, especially those in foster care and/or poverty, and the fact that one of the few “escapes” offered to such women is love and romance. The same “escape” is the only one that similarly maltreated Eponine is forced into. As noted here, she is “Raised by sociopathic parents and then forced into a life of poverty and crime” and “only wants the man she loves to love her, and sacrifices all to prove her love.”

The Funny Feminist takes issue with this plotline in particular, noting that Eponine has sadly become “the international spokeswoman for girls crushing on their male best friends, who swoon over the richer, more popular girl.” Like a 19th century Bella Swan, Eponine is hopelessly devoted to her Edward, in the form of Marius, but he only has eyes for Cosette. If the musical falters in its quasi-feminist politics anywhere, it is here, with the strong , resilient Eponine belting out her song of unrequited love, “On My Own,” while the male revolutionaries prepare to fight for a more egalitarian France–or, as the Funny Feminist puts it “when the poor folk rally against the 1 percent and the Mitt Romneys,” Eponine is busy singing a  “pity me, my life is so sad” song. To be fair, while she is indeed lovestruck, she also disguises herself as a boy in order to join in the revolution, and ultimately gives her life to save Marius.

While some reviews slam the film for not being political enough, as here (where the film is described as “a picturesque 19th-century version of Occupy Wall Street” lacking political context), I would counter that the film drips with politics, especially the micro politics captured in the feminist mantra “the personal is political.” From the tragic Fantine to the orphaned Cosette to the maltreated Eponine, the film depicts a story that is still all too true, and does so better than any musical version I’ve seen, showing that women–revolution or no–are all too often beaten, abused, exploited, raped and murdered. While it’s long ranked as one of my favorite musicals, it now holds the number one spot in this feminist heart for best musical film ever.