A nationally recognized expert and innovator in the world of digital media, Sarah Granger is also an entrepreneur, public speaker and author of the new book, The Digital Mystique: How the Culture of Connectivity Can Empower Your Life—Online and Off.

Having been online herself since age 9, she knows a thing or two about how digital media affects women. As a consultant, she has worked with women’s organizations such as BlogHer, WomenCount and the Women’s Campaign Fund.

In an email interview with the Ms. Blog, Granger put her expertise to work highlighting the multitude of ways digital media has changed women’s lives, discussing everything from communication to leadership to girls’ access to education worldwide.

Love the Ms. Blog? Donate $5 to keep us online!

Here are the nine most significant ways digital media has transformed women’s lives:

1) Digital media has provided a forum for community-building.

Digital media platforms, such as blogging and social media, are an excellent way to reach out to other like-minded people. “I would say that I think digital media has provided new outlets for communicating and building communities for women that we did not have previously,” notes Granger, who delved into blogging when she was bedridden due to a difficult pregnancy. For her, the act of airing out her thoughts and frustrations to an online community—and the encouragement she received from total strangers in return—was therapeutic.

Granger’s experience highlights the benefits of social media for women who feel isolated, such as mothers who stay at home during the day to raise families or women who feel alone in a new city. She explains,

People can poke fun at ‘mommy bloggers’ but in reality, being a parent is difficult and being at home alone dealing with screaming kids can be physically, mentally and emotionally draining. For the women who have become bloggers who are parents, that has provided an extraordinary outlet for them as well as a supportive community that did not exist before. [Similarly], a woman who only has a couple of close friends in her small town can now reach out to hundreds of other women like her online and find comfort. She can now share her frustration or exhaustion with others and not feel so alone.

2) Digital media has helped to empower women as leaders.

The speed and connectedness of digital media make it easier for women to amplify each other’s ideas. “Women can be empowered through existing communities, like organizations with an online presence (take Planned Parenthood, for example), or we can be empowered through our own personal networks,” says Granger. “We can also be empowered just by sharing our thoughts and having a voice on social networks. … Anywhere we choose to participate online, we can use our power or social influence to make a difference and to lead.”

What’s more, women have been able to utilize digital media to make their voices heard in a society that punishes them for behaving like leaders. Though women still combat hate speech and sexism online, Granger affirms that a woman leader can take advantage of digital media to stand out and demonstrate her knowledge and capabilities, which are then accessible by anyone with an internet connection.

As women, we’re often chastised for speaking up in-person the way that’s expected of men as a norm. Online, if we show our expertise through a bio or a blog, it’s just there for anyone to find, showcasing our expertise. We can tweet at any volume we like. There’s still bias—data shows that men are retweeted more than women, for example—but we still have a platform that can’t be taken away from us.

3) Digital media has made it easier for women to start their own businesses.

Whatever your brand is—whether your brand is you or your business—you have to present that brand in the best way possible online and off. You want all of your branding to be consistent and authentic. I think digital media provides a great opportunity for anyone who wants to show their expertise.

4) Digital media has provided a forum for women to engage publicly on meaningful topics.

Social networking sites like Twitter and Facebook are useful tools for people who want to rally support for important causes or engage with the public about a topic of interest. Granger writes that social media activism and organizing online are great tools for women looking to reach a broad audience quickly, and many women have already made notable achievements.

I think we’re just beginning to see how women can raise our voices online for important issues, and it’s going to take time to see the results offline, but there are examples of specific cases where women have been able to raise awareness about issues and use that increased awareness to enact legislation. For example, there are women all over the world working on raising awareness about postpartum depression and related problems. Some of this online outreach, thanks in part to blogs like Postpartum Progress, has been put into action and legislation has been created in states to help educate more people about what can happen to women during pregnancy and after delivering babies.

5) Digital media has helped activists to raise awareness about misogyny online, and given people tools to combat it.

Although digital media can unintentionally encourage hate speech because of the anonymity it provides, it also serves as a space for men and women to come together and publicly condemn it. Says Granger,

I can say that with all of the sexism and hate speech that’s out there online and off, we have more women and men expressing why this is wrong and speaking out. Just by being able to read online about topics like rape culture, for example, we are able to educate people offline and that can make a difference over the long term in how we behave as a culture. Our online culture…has the ability to help move the needle in our society.

Because of how quickly news spreads over the Internet, digital media has completely changed the landscape of how we learn about current events in other parts of the world. “Most people are now aware of the plight of women around the world,” Granger affirms, also noting that being able to view realtime accounts online and access information through a vast amount of sources helps us to become more informed “in a more democratic way,” rather than solely through a biased television network or newspaper source.

This rise in public awareness also makes it much easier to support and take action on behalf of women and girls’ education in other parts of the world. “If you look at…campaigns to educate women and girls globally, you’ll see there is a much higher level of awareness about this topic now than there was 10 years ago,” says Granger. “I have seen examples of Kickstarter campaigns where education programs have been funded online and there are certainly cases where awareness has allowed more people to provide resources to these programs.”

The advent of the digital age has brought with it a surge of new career opportunities. Because so much of the way we learn, interact and do business is online, studying computers is considerably more common in schools now than it was even a few years ago. Girls who are taught to interact with technology at a young age will grow up with a solid foundation from which they can delve into a STEM-related career (an area in which women are still working toward equal representation). Granger elaborates on how much more common it is to see young women online today:

When I was a girl, I was the only girl at my grade school who knew how to program computers. Now, girls [in the U.S.] have the same opportunities at a young age as boys. We still have cultural issues about boys being [perceived] as more attuned to technology than girls, but if a girl wants to learn, it’s easier for her to get started. We still need to tackle the problem of low numbers of girls and women in tech and that discrepancy—it’s a problem that needs attention from infancy through adulthood—but we’re all communicating on digital devices now and that’s a change from when I was young and there were relatively few of us online. 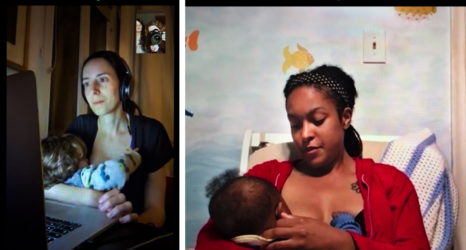 Is Online Breastfeeding a New Thing? How the Pandemic is Changing Everything and Nothing

Moving the Apostrophe in Mother’s Day: Helping Mothers Around the Globe
Voices from Kabul, Afghanistan: “You Can Take Our Lives, But Not Our Education”
Mother’s Day Flowers That Reflect the True Value of a Mother’s Work: $800 Billion