On the 42nd Anniversary of Roe, Time to Listen to Women Born After It - Ms. Magazine
Skip to content

Today marks 42 years since abortion was made legal in all 50 states. Since then, anti-choice politicians have worked endlessly to undermine that decision and make abortion less attainable. Young people are at our most vulnerable when it comes to an unplanned pregnancy, and we are once again concerned that our rights might disappear.

This isn’t just the anniversary of Roe v Wade: This is also the start of a new election cycle, one already overflowing with presidential candidates who want to restrict our reproductive health decisions. But candidates need to remember that we—voters ages 18-29—can make a huge difference in the next election.

Despite being one of the largest voting blocs in the country, young people are still underrepresented, policy-wise, by those who end up in office. We have proven that we will cast ballots for candidates who speak to our issues, but we have often been disappointed when they fail to enact policies most important to our generation.

During the 2012 presidential race, we showed our power as a voting mass. Fifty percent of us showed up at the polls—23 million—and our votes made a huge impact on the electoral landscape. According to The Center For Information & Research on Civic Learning and Engagement (CIRCLE), 80 electoral votes were decided by young voters.

Those voters, especially young women, had a reason to be engaged: We really felt that we were on the candidates’ radar and that we mattered in their agendas. “The Life of Julia”—the Obama presidential campaign cartoon depicting the different ways an administration’s policies affects us throughout our lives—resonated with us and made us know that our votes counted.

This year, instead of “The Life of Julia,” we saw the College Republican National Committee’s “Say Yes to the Candidate,” a demeaning  attempt to talk to us as if we can’t understand political issues unless they are wrapped in reality TV tropes with a wedding bow on top.

When it came to our issues in the midterm election, young women often felt left in the cold. While we are a generation saddled with student debt, the skyrocketing costs of education were barely mentioned on the campaign trail. And conservative candidates vowed to dismantle the Affordable Care Act—the law that has allowed many of us to stay on our parents’ insurance as we continue school or search for work in today’s still-tight job market.

We need candidates who will affirm the right for everyone to have full control over their own futures, and thus understand the importance that abortion can play in our economic, personal and educational opportunities. Young people want leaders who will roll back the tide of abortion restrictions and make the promise of Roe a reality for all.  Instead, what we have is a conservative-controlled Congress that will be using this anniversary of Roe v. Wade to cast votes on a national ban on later abortions.

Today, on the 42nd anniversary of a court case that enforced our right to control when and if we have a child, we remind Washington politicians that they have two years to prove to us that we matter, and our issues matter—because when we are successful, the country is successful, too.

Pass the laws that give us the tools to thrive—as students, workers, entrepreneurs, parents—and watch us support you at the ballot box. 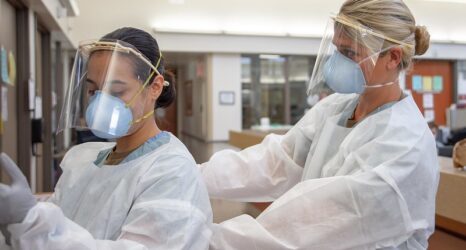 Is Sex Discrimination in Medical Research Thwarting a Cure for COVID?