The series continues with T. Denean Sharpley-Whiting, Gertrude Conaway Vanderbilt distinguished professor of African American and Diaspora Studies and French at Vanderbilt University, and the author of the newly published Bricktop’s Paris: African American Women in Paris Between the Two World Wars.

In time for Black History Month, Sharpley-Whiting’s latest work highlights the creative community of African American women writers, artists and innovators who traveled to Paris in the 1920s and 1930s in search of artistic and personal freedom. From salon owner Ada Bricktop Smith—the central figure in this community—to entertainers Josephine Baker and Ethel Waters to artist Augusta Savage to pioneering aviator Bessie Coleman, Paris became a magical epicenter and metaphor for racial and sexual liberation for many Black women seeking to escape the entrenchment of a racially segregated United States.

I had a chance to discuss with Sharpley-Whiting this exciting and informative book—part history, part fictional autobiography of Ada Bricktop Smith.

What made you decide to revisit this particular story and era?

I moved into this early 20th-century work and politics when I was researching for my book, Negritude Women (2002), which required me to revisit the 1920s and 1930s and to look at the racial politics of that period. If I had to visit Paris in any era, it would definitely be that particular time period. I was also interested in Josephine Baker who is from St. Louis, which is where I’m from. I’ve been working on this project for 10 years, starting around 2004, when I really began working in earnest on another book, Pimps Up, Ho’s Down: Hip Hop’s Hold on Young Black Women (2008). So on the one hand, I’m exploring Black women and contemporary music and cultures (with Pimps Up, Ho’s Down), and on the other hand, you have this early jazz age, where I’m looking for these spaces of freedom for Black women.

Did you see any similarities between this jazz-age era and contemporary hip-hop?

There were these freedoms associated with Paris. And with hip-hop, it’s debated as this liberatory space for Black women as well, just as the jazz age is seen. With jazz and hip-hop, we have interesting possibilities and yet foreclosures. For me, both of these movements, while liberatory, were also fraught with booby traps for Black women.

Your book highlights so many Black women; I was surprised by how many were visiting and living in Paris at that time.

Initially the book highlighted around 40 women just from that era. I was tempted to even date back to the late 19th century, but I figured if I did that I would be working on this for the rest of my days! So I had to pare it down and I decided to center the story on Ada Bricktop, which is a counter-narrative to Josephine Baker. I shifted to someone who people may or may not know. Of course, Josephine Baker is a phenomenal figure, but by the 1930s, her novelty and her exoticism had started to wane, and other Black women were visiting Paris, other individuals who upended Baker in interesting ways. I [wanted to] bring them out and show that it wasn’t just Baker at this time who fascinated Parisians.

Your book is intriguing in the way that you brought together so many different entertainers, artists, writers and innovators. They tend to be talked about individually in various historical projects, rather than viewed as existing in a community.

I’m covering similar territory as Tyler Stovall’s Paris Noir, William Shack’s Harlem in Montmartre, and Michel Fabre’s From Harlem to Paris. Effectively, the motif in these works has been: “There’s a Black colony in Paris.” My story is really focused on the fact that within that colony there’s a Black women’s creative community and they’re sustained by and with their interactions with Ada Bricktop Smith.

What will most people learn from your book that they may not have previously known about these women or about this era?

I do think that Ada Bricktop Smith is a surprising figure in this history, at least in terms of her longevity. She had been in Paris for 15 years, and of course she was interacting with Josephine Baker, but she’s also interacting with a whole bunch of other people. Who would have known that Bricktop and Cole Porter and F. Scott Fitzgerald were that tight? And she has all these opinions, and writers like Henry Miller are bringing their work to her to read. And she’ll say to him, “Look, I’ve done a lot of these things that you write about, but I wouldn’t exactly put them on paper!” Of course there are respectability politics at play with Bricktop when she says this. There’s also a fascinating interaction with Bricktop and blues singer Alberta Hunter, who actually accuses Bricktop of stealing a telegram meant for her, a telegram that invited her to Paris!

The community of these women makes for a hilarious read when you examine their interactions. I mean, who would have thought Ethel Waters could be so mean as a person? And Josephine Baker was initially threatened by an entertainer like Adelaide Hall. There were so many things they said about each other that makes it a fascinating story about this complicated yet still supportive community of women. They embraced each other and were respectful of women’s sexual choices as in the case of Alberta Hunter and Ethel Waters who were lesbians.

Do you think Paris still has the same allure as it did from that era?

There is something magical about Paris, but I don’t think the possibilities are still there as they used to be. I think some people still believe Paris will be easier for Black artists, but there is a privilege of being American that you don’t have being from the former French colonies. I think most Americans go to Paris from that privileged position, so you’re going to Paris differently than others going to Paris from different circumstances. The Black women from the 1920s and 1930s didn’t really know much about Paris. When Bricktop and others from that era traveled to France, they knew nothing—not the language, not the culture—so they forged their expatriate community out of necessity.

How does this book contribute to feminist scholarship?

It’s a recovery project, and anytime you recover women’s histories and women’s contributions to music and the arts, you’re doing the kind of feminist work that’s important. It’s not necessarily rooted in explicit feminist politics, but my lens as a feminist is already there, so I’m going to be teasing out certain things as a feminist when I’m exploring this history and telling this story about these women from France and the United States. 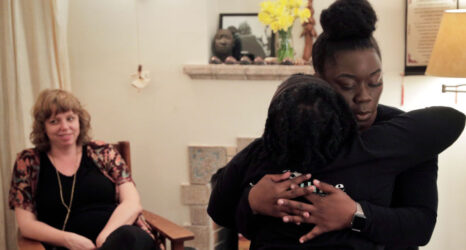 The Dream Continues: Amplifying the Voices of Black Women to Achieve Health Equity