Sex and Suffering: The Tragic Life of the Japanese Courtesan - Ms. Magazine
Skip to content

This article is excerpted with permission from Collectors Weekly

It’s difficult to get a window into the world of Edo-Period Japanese prostitutes without the gauzy romantic filter of the male gaze. The artworks in the new San Francisco Asian Art Museum exhibition, “Seduction: Japan’s Floating World,” were made by men for men, the patrons of the Yoshiwara pleasure district outside of Edo, which is now known as Tokyo. Every little detail of Yoshiwara—from the décor and fashion, to the delicacies served at teahouses, to the talents of courtesans, both sexual and intellectual—was engineered to sate a warlord’s every whim.

We’re left with the client-commissioned pretty-girl scroll paintings by masters like Hishikawa Moronobu and Katsukawa Shunshō, as well as woodblock prints and guidebooks by commercial artists meant to lure repeat visitors through the red-light district gates. These often lush and colorful artworks are rife with romantic longing, from the images of interchangeable beauties with inscrutable expressions, to the layers of richly patterned textiles they wore, and the highly symbolic haiku poetry written about them. The showstopper of the exhibition is Moronobu’s nearly 58-foot-long handscroll painting “A Visit to the Yoshiwara,” which takes viewers on a tour of the pleasure district from the street vendors and the food being prepared to the high-ranking courtesans on parade and a couple cuddling under the covers in a teahouse.

The Yoshiwara pleasure district was just part of what the Japanese referred to as “ukiyo” or “the floating world,” which also included the Kabuki theaters of Edo. Originally, the Buddhist term “ukiyo” referred to the sorrow and grief caused by desire, which was seen as an impediment to enlightenment.

“In the Buddhist context, ‘ukiyo’ was written with characters that meant ‘suffering world,’ which is the concept that desire leads to suffering and that’s the root of all the problems in the world,” explains Laura W. Allen, the curator of Japanese art at the Asian Art Museum who originated “Seduction.” “In the 17th century, that term was turned on its head and the term ‘ukiyo’ was written with new characters to mean ‘floating world.’ The concept of the floating world was ignoring the problems that might have existed in a very strictly regulated society and abandoning yourself, bobbing along on the current of pleasure. Then it became associated with two particular sites in Edo, one of which was the Kabuki theater district, the other the Yoshiwara pleasure quarter. The art of the floating worlds ‘ukiyo-e,’ which means ‘floating world pictures,’ usually depicts those two subjects.”

But, of course, by and large, this free-floating sensation belonged to men. Allen suggests that we, as viewers, resist indulging in the fantasies of Yoshiwara prostitutes presented in the artworks, and instead, consider the real lives of the women portrayed. Unfortunately, no true records of the Edo-Period prostitutes’ personal thoughts and experiences exists—and with good reason. Publicizing the dark side of the pleasure district would have been bad for business.

“Don’t take these paintings at face value,” Allen says. “It’s easy to say, ‘Oh, yes, it’s a picture of a beautiful woman, wearing beautiful clothing.’ But it’s not a photograph. It’s some artist’s rendition, made to promote this particular world, which was driven by economics. The profiteers urged the production of more paintings, which continued to feed the frenzy for the Yoshiwara.

“The artwork is very much glamorized and idealized,” she continues. “I haven’t been to 17th-century Japan so I don’t know what it was actually like, and the women didn’t write about it, so we don’t have their firsthand accounts. To imagine it from a woman’s perspective, it must have been a very harsh reality. There’s been some modern scholarship that promotes the idea that the women working as prostitutes had an economic power that they might not have otherwise had. But I think the day-to-day reality of living in the Yoshiwara could not have been pleasant.”

For one thing, most of the women involved didn’t have a choice about their occupation. Born into impoverished farming or fishing villages, they were sold to brothels by desperate parents around the ages of 7 or 8. This tradition was rationalized by Confucian ideals that allowed the children to work out of a duty to their parents, who usually brokered 10-year contracts with the brothel owners that their girls would have to work off. The little girls would do daily chores at the brothels and tended to their “sister” courtesans, cleaning and delivering messages. In those early years, they’d learn the tricks of the trade, how to speak using manipulative language, to write “love letters,” and to fake tears with a bit of alum hidden in their collars.

If a child attendant proved she was gifted by age 11 or 12, she would be chosen for elite courtesan training, where she would learn etiquette and refined arts from masters, including how to play flute or a three-stringed instrument called a samisen, to sing, to paint, to write haiku, to write in calligraphy, to dance, to perform a tea ceremony, and how to play games like go, backgammon, and kickball. She would be well-read and literate in order to engage in stimulating conversation. While these are pleasurable activities and such talents would be a source of pride, these women weren’t encouraged to pursue them for their own fulfillment, but to make themselves more attractive to men.

“They would be trained in the very polite, cultural accomplishments of the type that aristocratic women would have,” Allen says. “The idea was that they were comparable to the wife of a daimyo [feudal lord] or a high-ranking samurai [warrior] in terms of their level of accomplishment. The elite courtesans were supposed to know all of the lady-like skills, and their skill level was keyed to how much space they would have in a brothel and how lavish their clothing was. It was a very carefully calibrated hierarchy.”

On the occasion of being accepted for courtesan training, the girl’s virginity would be sold to a client for a hefty sum. As a young teenage courtesan, her job would be to entertain patrons while they waited to meet with an elite courtesan. Her debt to the brothel would only increase as she rose through the ranks, as her luxurious and ever-changing wardrobe, which required as many as four or five layers of kimonos worn at a time, and the tips and fees for her attendants were her financial burden, too. Forced to work long hours even when they were sick or having their periods, the women of Yoshiwara had to make a daily quota, or they would be fined. The quotas would double on so-called holidays known as “monbi.”

“It was very difficult for them to buy out their contract because they were kept in debt the whole time, because they had to pay for all sorts of things.” Allen says. “They were very rarely able to escape unless they were basically ransomed by a man who wanted to take them out of that world.”

Competition for clients, ranking and celebrity status was fierce among the “sister” courtesans, who could be cruel to one another, not to speak of the abuse they suffered from their clients. After being abandoned by their families of origin, the girls lived with mistreatment by their new “families.” That said, it’s also true that prostitutes in some ways had a better life than the people in their farming villages back home—they had regular meals, clean clothes, access to education and an opportunity to become a star.

In the medieval period, Japanese Buddhist traditions, particularly among the lower classes, embraced casual sex and promiscuity. Even the myth of Japan’s creation involved two gods making love, which became part of the justification for selling girls into prostitution. Male promiscuity often extended to sex with other men, which was considered normal.

Women, however, didn’t benefit from Japan’s libertine attitude toward sex. The wives of the daimyo and high-ranking samurai, following Confucian ideals, were expected to dress modestly and served their husbands, while the feudal lords looked to courtesans to find passion and love. The clients wanted to believe that their favorite courtesans were in love with them, and they were sold as such. But the women working at these brothels weren’t expressing their own sexual desires or autonomy.

The pretty-girl hanging scroll art of the period often presents a courtesan pining for a lover, whereas guidebooks warn of “femme-fatale” courtesans faking pleasure or attraction, deceiving a hopeful heart. The art-and-poetry-infused 1660 guide book Mirror of the Yoshiwara pretends to be interviews with courtesans revealing how they fake orgasms or deal with unpleasant men, but they’re complete fiction—once again, they’re prostitutes’ stories filtered through a man’s perspective.

“That was the way men were led to think about the women, that they were these tricky femme fatales who could trap you,” Allen says. “They could pretend to be in love with you but not really be in love with you. Mirror of the Yoshiwara is fascinating to the extent that it creates an image of women who were very alluring. You really want to spend time with them, but at the same time, you need to be on your guard, which makes it all the sexier. Those sorts of stories were repeated again and again in books over the course of the centuries, passed down as being firsthand accounts. When you actually look into it, they’re far from that. They’re just received wisdom about what it’s like in the pleasure quarter.”

In reality, the high-ranking courtesans and low-ranking prostitutes all suffered from venereal disease and the hardships of bearing unwanted children. The courtesans in particular wore toxic lead makeup to whiten their faces, necks, hands, and feet. Many prostitutes died by age 20.

“From my perspective, there was a very elaborate mechanism for promoting this idealized vision of the world the courtesans and prostitutes lived in which didn’t necessarily in any way match up with the reality of it for them,” Allen says. “They had no one speaking for them. Very few images of Yoshiwara actually spoke the truth as they saw it.”

Photos used with permission from the Asian Art Museum 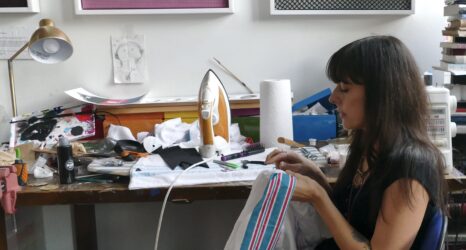 With UNPLANNED PARENTHOOD, Feminist Artist Michelle Hartney Calls for Contraception Access for All 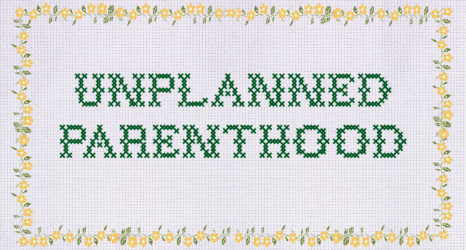 UNPLANNED PARENTHOOD: Inside the Art Installation Using Historical Testimony to Call for a Feminist Future