October is Domestic Violence Awareness Month. The Ms. Blog will be publishing a series of posts detailing the impact of domestic violence, including personal essays and more, throughout the month.

It’s midnight now, maybe later. There is no backlit clock on the nightstand to tell me the exact time. Half-asleep, I lie on the firm double bed mattress in an upstairs bedroom in my brother-in-law’s home in Vermont. My husband is downstairs on his computer. He stays up late often. I rarely hear him slip into bed beside me.

Our Christmas Day celebration has ended. The other family members have retreated to their various sleeping quarters. The cousins are thrilled to be camping in the finished basement. Assorted board games, a four-foot long wooden doll house and piles of dolls and stuffed animals have been pushed aside from the center of the room to line four sleeping bags in a row on the dark green carpeted floor.

I toss and turn, hug my foam-filled pillow and try to find a comfortable position on the dark mahogany bed. Suddenly, I jolt into wakefulness. My nerves pulse in recognition as I hear the raging screams from my husband. Racing down the stairs, I see him pinning our 6-year old son, Trevor, against the living room wall. Purple veins in my husband’s neck bulge as he shouts, “Why aren’t you asleep?” an inch from our son’s face. Trevor’s hands hang limp against a black, oversized Taz nightshirt. He meets his father’s gaze with wide frightened eyes. My husband’s color flushes deeper than his Christmas sweater as he tightens his grip around Trevor’s upper arms and pushes him harder against the wall.

I move in to protect my son and feel the gentle hand of my father-in-law on my right shoulder. He quietly walks over to his son, placing his brown plaid flannel arm around his son’s waist and ushers him away from the battle scene.

Kneeling to make eye contact, I gently touch Trevor’s shoulders. “Honey, are you OK?” I ask softly as tears well in my eyes. He nods.

“I forgot to brush my teeth. He told me to go back downstairs. I tried to tell him, but he cut me off…” I give my son a hug burying his head against my breast. After a moment of silence, Trevor whispers, “Let me go, Mom.” He gently removes my hands from around his waist. “I just want to go back to sleep.”

Still on my knees, my eyes follow him as he slowly walks over to the basement door and descends the wooden stairs. Motionless, I listen to the creak of each step until there is silence. The only remaining sound is the internal voice of my mother as she repeats the reprimand I heard over and over again: Stop making your father angry.

I berate myself for somehow repeating this pattern with my husband, wondering how I contribute to my husband’s anger.

What I want to write next is that I load my children, their gifts and suitcases into our Dodge Caravan. And then, in the pitch dark, weathering the subzero temperature, still wearing my purple flowered flannel nightgown, we drive home, leaving their father far behind. Before breakfast the next morning, my shaking fingers unzip the side pocket of my pocketbook and pull out the tattered card with an attorney’s phone number on it. This time, I make the call.

But that’s not what happens next. In reality, the next morning, my body tenses as I feel my husband sleeping beside me. Quietly slipping out of bed, I make my way to the bathroom to take my ulcer medication. Filled with self-accusation, I can’t bear to look at myself in the vanity mirror. After all, it’s a mother’s duty to protect her child. I vow to find a way to stop making my husband angry.

It will be several years before I take the action I should have on that cold, dark Christmas night.

Marie Jordan-Whitney, a published author and public educator, has worked with the staff at The Center for Women and Families of Eastern Fairfield County in Connecticut to support women and children who have suffered from domestic violence. Marie also teaches graduate level writing courses at Southern Connecticut State University.

‘Uncultured’: The Intergenerational Trauma of Girls Growing up in Cults 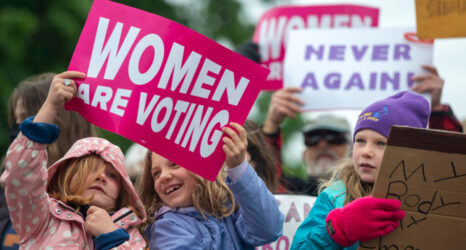 Who Will Care for Indiana’s Pregnant Children?