This Bill Could Change the Lives of Rape Survivors in California – Ms. Magazine
Skip to content

At the start of the 2016 legislative session, California state Sen. Connie Leyva (D-Chino) introduced important bipartisan legislation called the Justice for Victims Act. If passed, this bill would abolish the current California statute of limitations in sexual assault cases, which prohibits any legal action for most incidents that occurred more than 10 years prior. (In rare cases where DNA evidence is collected, victims are allotted more time.)

“This bill is a no-nonsense effort to make sure that sex offenders and child molesters are held accountable for their actions,” said San Bernardino County District Attorney Mike Ramos in response to Sen. Leyva’s bill. “As advancements in DNA technology and evidence collection continue to progress, so should our laws.”

Leyva introduced her bill after a group of women who have accused Bill Cosby of sexual assault, along with other allies, came together last November to protest against California’s statute of limitations. Of the more than 50 women who have accused Cosby, just a handful have cases that fall within the statute’s timeframe.

The most common argument in favor of statutes of limitations for sexual assault is that rape convictions rely heavily on eyewitness testimony, and therefore any large passage of time could mean fogginess of memory and inaccurate accounts. Some argue that after long periods of time, a victim might accuse anyone who loosely fits the characteristics of their assailant. But about 80 percent of assaults are committed by someone known to the victim, so concerns about false identification are misplaced in most sexual abuse situations. The sexual assault allegations against Cosby are a perfect example of this.

Also, for many survivors, time is necessary to accurately process a traumatic experience and be able to present a coherent narrative to law enforcement. In fact, a White House report on rape and sexual assault states that, “the trauma that often accompanies a sexual assault can leave a victim’s memory and verbal skills impaired—and without trauma-sensitive interviewing techniques, a woman’s initial account can sometimes seem fragmented.” Thus, a time restraint can hinder justice and discourage victims from coming forward.

Statutes that grant impunity to assailants after a short period of time only further contribute to the culture of silence and shame that many survivors have to grapple with after an assault. In order to combat rape and its surrounding culture, states must ensure that sexual predators can’t evade legal consequences.

With 1 in 5 women in the U.S. experiencing sexual assault or rape in their lifetimes, it is clear that sexual violence is a societal problem reaching all strata of society. The oppressive legislation that upholds this pervasive problem in 34 states must be deconstructed. It is long past time for California to join far more conservative states, such as Alabama, Alaska and Arizona, which have already eliminated the statute of limitations for rape cases. Stand with activists and rape survivors nationwide in working towards eliminating victim blaming and impunity for rapists nationwide, and support the Justice For Victims Act.

Sign this Change.org petition to help Cosby survivors “turn trauma into triumph for recent and future victims of rape,” and abolish California’s statute of limitations. You can also keep up with activist group End Rape Statute of Limitations, or ERSOL, on their website and Twitter. And check the legislation in your own state and apply pressure to your legislators for change—because no matter where you live, justice should know no time limit.

About Autumn Johnson and Micol Garinkol

Harvey Weinstein’s Case Relies on Weaponizing the Effects of Trauma 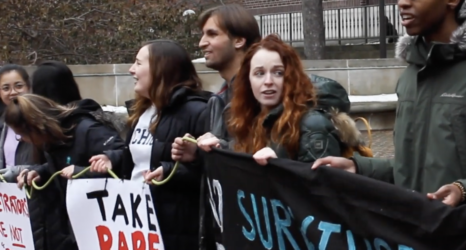