White Women Can’t Get Away in Get Out - Ms. Magazine
Skip to content

Get Out provoked the shameful memory of the time I failed my close friend of 20 years.

A drunken middle-aged white woman accosted us as we were entering a Chicago-area hotel whose name—”The Homestead”—pretty accurately evokes its vibe. “Why not all nerds unite?” she spat from her table on the front porch, pointing at my friend’s “Black Nerds Unite” t-shirt.  (“White nerds already have,” my friend retorted). As she continued to rant in front of an audience of shocked white diners, I did what many a wealthy white woman has been trained to do: I went into helpless mode.

“Do something,” my friend begged, on the verge of rare tears. So I sprung to action and… went and looked for the manager. Ms. I-have-read-the-Critical-race-canon-from-Fanon-to-Rankine-and-have-marched-against-the-Klan” couldn’t muster a word of protest when confronted with a racist matron in “polite” white society. This earnest white feminist was unwilling to disturb the scripts of elite white decorum to confront the white supremacy beneath.

As you may guess, management “managed” the situation by apologizing, but professing their own inability to intervene. I left that incident grieved for my friend, and horrified—not by the overt racism of the antagonist, but the depths of my own. After lots of processing we are still friends, but we both carry the memory into all our shared encounters. From the beginning of Get Out, the story of a Black photographer (Daniel Kaluuya) brought home to dinner by his white girlfriend, I knew the white women in the film were not to be trusted. But I still thought that when things got bad they would fail Chris out of incompetence and obliviousness, or maybe out of some torn allegiance to white men in the family. But in Get Out, Rose (Allison Williams) and her mother Missy (Catharine Keener) are indispensable agents in the family’s plot. After all, it is their sexual and emotional efforts, not the brother’s vigilante methods, which most effectively lure Black people into their orbit.

This means that white women watching the movie, especially those who prefer to imagine themselves somehow apart from white supremacy, are in for a uniquely excruciating experience.

Get Out is an exploration of Black people’s psychological, physical, and existential experience of Blackness in America, as well as enslavement, integration (horrifyingly literal), cultural appropriation, sexual fetishization, and betrayal by white women. The movie flips white film genres and technologies on their head for Black audiences—to stunning political and psychoanalytic effect. The film is first and foremost for Black viewers, who witness the unfolding terror through Chris’s gaze. But it also requires that white people “see the world through the eyes of a Black person for an hour and a half,” as director Jordan Peele explains. This means that the horror Get Out holds for white audiences is of a different nature: It raises profoundly unsettling questions about our role as viewers, as well as our real-life complicity with the deadly white sexual and family dynamics on screen.

Get Out upends the white gaze, locating viewers in Chris’s position as the looker even as he is constantly being looked upon and measured by the white party-goers assembled, it turns out, for his auction. In the film’s terrifying turning point, Chris is immobilized in front of a TV screen, where he learns that a white art dealer (Stephen Root) will soon inhabit his body and most—but importantly not all—of his brain. This means that Chris will watch and witness as the dealer moves through the world in Chris’s body. He will forever remain a paralyzed spectator—much like Black filmgoers obliged to watch movies, including about Black people, from the perspective of white filmmakers. But it also means that the blind dealer will be viewing the world with Chris’s eyes.

“I want your eyes, man,” he explains. “I want those things you see through.” This is exactly what sympathetic white viewers are doing at that moment and in this movie: looking at the world through Chris’s eyes. This troubles our longed-for identification with Chris by aligning us instead with his white host. In that moment, white audiences must confront the distressing idea that we are the villains in this film—and in this theater, and in this industry and in this culture.

This is even more the case for white women.

Peele relies on long-standing filmic traditions of women’s performance of white motherhood and femininity to encourage viewers’ fear of Missy and faith in Rose. Missy’s character evokes a long line of larger-than-life white mothers in melodramatic and horror films, from The Imitation of Life, Who’s Afraid of Virginia Woolf, Mommy Dearest and The Blind Side to The Stepford Wives, Carrie and Serial Mom. (The Blind Side arguably belongs on the horror side). When Missy hypnotizes Chris by preying on his fears about his attachment to his own mother, she orders him to what she calls “the sunken place”—one of the most chilling lines in the film. She looms over him as he free-falls into a half-world of childlike submission and abjection. It is Missy who’s the master of the house, wielding her power over Georgina (Betty Gabriel) and her family alike with her “soothing” domestic rituals and accessories.

Domesticity and motherhood, not male violence and patriarchy, is the lynchpin of white supremacy.

Rose has a different modus operandi. Rose attempts to seduce Chris and viewer alike with her toxic combination of charming racial innocence and racial know-how. From the moment she bites her lip as she picks out (white) pastries, to her apparent embarrassment at her creepy brother’s impolitic racial comments and sexual stories, to the “cute” shot of her in sensible underwear brushing her (foaming) teeth and professing horror at her parents’ micro-aggressions, Rose milks the image of pure, protected and color-blind white women. At the same time, she performs hipness. She warns Chris ahead of time that her dad will brag about voting for Obama, jokes familiarly with Chris’ best friend Rod and calls out a cop for racially profiling Chris—which he finds “hot.”

It’s tempting to identify with Rose as Chris’ lover and ally and then to want to believe she’s really just flustered and disorganized when she is looking for the keys to his escape. Williams’ physical transformation at that turning point is striking as Peele begins framing Rose using Leni Reifenstahl inspired images of Aryan superwomen.

At that moment, white women must realize that those earlier images of white women—the kind we just a minute ago probably bought into—have been used in the service of white supremacy as surely as Nazi propaganda. We may laugh knowingly as she eats Fruit Loops one half at a time and drinks milk through a straw while stalking her next victim on the internet, but the soundtrack of Dirty Dancing reminds us that our identification with that film’s “Baby” is perverse. While Dirty Dancing is about the fantasy of white women’s heterosexuality dissolving class inequality, this film is about the fantasy of white women’s heterosexuality dissolving racism.

For white women who have earlier identified with Rose, the film’s dizzying final scene—which reverses film taboos and tropes including the “Final Girl” horror-film staple—complicates troubled identification even further. It feels simultaneously racially liberating yet sexually masochistic to be cheering on Rose’s—and our own—intimately filmed death.

In part, Get Out enables white viewers to assume critical distance from whiteness. At the same time, it brilliantly allows us no escape. There can be no projection of racism onto “other” whites—the poor, the southern, the conservative, the men, the 53 percent of white women who voted for Trump, the not-as-woke white feminists.

There is no way “out.” We can’t get away from ourselves. We are in it. We are it. And that is terrifying. 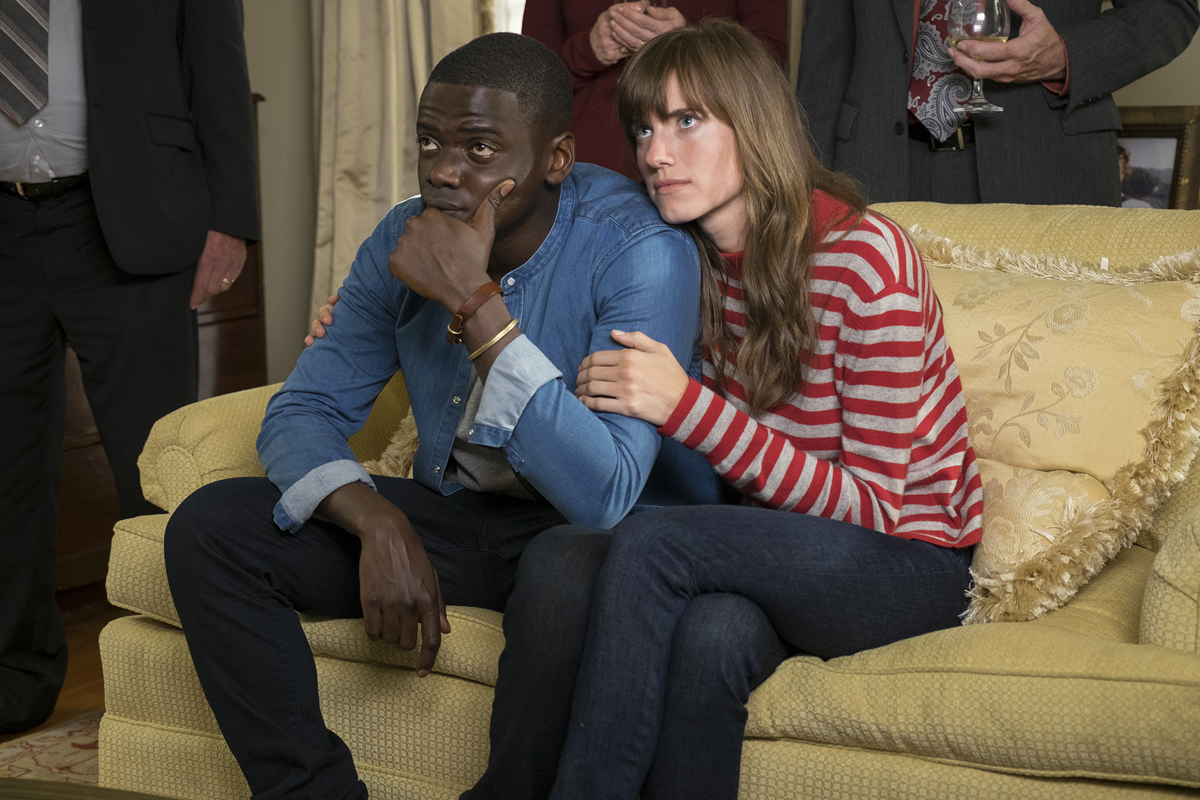 Leslie K. Dunlap was formerly a film writer for the Twin Cities' City Pages. She is currently a Professor of History, Women's and Gender Studies, American Ethnic Studies and Film Studies at Willamette University in Salem, Oregon. She teaches and writes about social movements in the United States and the gender and sexual dynamics of white supremacy.