This interview is part of the the Eucid Series, which highlights the voices of contemporary, urban women from Mongolia to draw up a genealogy of female mentorship. At the end of each interview, each woman describes a role model, whose interview will be published next.

Everything about a person you know from the hat.  He keeps his hat well, he keeps his person well.  The man with a horse on his hat has a horse in the races, a good horse.  Maybe the horse on his hat is gold or silver.  Then you know he is one of the best horse binders in Mongolia.  He has the best horses.  His horses are winning at Naadam, winning at Tsagaan Sar, winning the races.  You can look for the zalaa, the red tassels.  The tassels tell you how many races his horses have won.  A round mark on the zalaa means first place.  A moon-shaped mark is for second place, third, fourth, or fifth.  For example, if one person has three round shapes, it means their horse won three times at the races.

If she is wearing the round-shaped toortsog, you know she is a young girl and unmarried.  You know her ethnicity.  It is Khalkh, my ethnicity, the most common ethnicity.  You know she is kind of old-fashioned, or maybe she is a dancer, because girls like me, modern girls, we don’t wear the toortsog.  We think it is a historical thing.

The fur hat, like the loovuuz, the unshaped hat, tells you it is winter.  But you don’t know who is under that hat.  It could be a man or a woman or a child.  You don’t know if she is married or unmarried.  The loovuuz is my favorite hat, because it is easy to make, and it is for everyone.  You wear a loovuuz, no one knows all the things about you.

For a man, especially, the hat is first.  When you are coming into the home, the man hangs his hat on the highest hook, and always carefully hangs it.  The hat is the head, almost the soul-thing.  If you are careless with your hat, it can fall onto the floor.  That is a terrible thing, because then anyone can step on your hat, and what are you going to do when someone has his foot on your soul?  And for that person, too, it is not good to step on someone else’s soul.  It is unlucky.

My mother makes hats.  My father designs the sloper, and my mom sews on her sewing machine.  They are making hats all of their life.

My father was a foster-child. He grew up in Arkhangai Province, but his family left him and went to Darkhan City when he was two years old.  When he was young, he bought a fur hat, and after several years, his hat was shapeless, worn out like an old washcloth.  He could not afford a new hat, so he decided to form his hat again himself.

He made a mold of wood for his hat.  He unsewed his hat and shaped it with the wooden mold, and he got an idea to make hats from animal skins and to share them with other people.

Then he eats the meat of the marmot, and with the skin, he makes his hats.  My father manufactured the skins by himself.

For my parents’ marriage, my father’s real family came to Arkhangai.  To celebrate.  They knew hats, too, actually.  It was a surprise for him.  They were also hatmakers.  They exchanged their hatmaking experience.

My dad’s brothers taught him how to make summer designs for the toortsog and the wooden shapers.  My dad taught them how to hunt the furry animals and how to treat their skins with milk and salt….

What did I say?

The shamans, they don’t want the modern hats.  My brother-in-law is a shaman, and my uncle’s child, too.  And my mother’s friend.  There are many, many shamans in Mongolia, but not all are the real shamans.

The shaman spirit also wants special clothes like the traditional deel, and shoes, and to drink vodka and smoke.  He smokes and sings a lot.

I remember, I went to the shaman first time.  I was so scared.  Because his voice was very, very strange, and he hides—they hide their eyes with the hat.  I can’t see his eyes.

It was four years ago.  He took a cup of milk and he scattered the milk into my face.  The milk washes the bad things away from me.  That was very strange for me.

I asked him about my future—what school and what major.  He told me interior design or architect is the best fit for me.  He said, he could see me—I was painting the inside walls.  But I didn’t choose those things.

I went, because my mother needed to ask something from the shaman.  She needed to ask about a problem with money—how to get more money from the hats.  How to continue the business for her family.

It is not comfortable for my parents to be working still from home.  Because there are so many materials for the hats and a big table for the sloping and patterning and the sewing machines.  And all the hats.  Hats, sometimes, in the kitchen and on the television and on the bed.  We have three sewing machines.  Two are for my mother—one is automatic and one is mechanical.  The mechanical machine is from my great-grandmother and it is one hundred years old.

How does it work?  It works well.

She uses it sometimes to sew the details for the hat….

The automatic machines are better, because they are faster and more modern, and we have two of them.  One is for my mother, and one is for my sister, who studies fashion design.  When she graduates from her school, she will come home and help my parents.

They will have a family business.  With my sister to make the clothes, and my parents making the hats, they will be very successful.

I am happy to help with making the hats, especially in winter when there are so many orders, it is hard to fill them, but my dream is elsewhere.  I want to be a more skillful translator and teacher.  My father sometimes tells me to discharge my translating work, because it is a lot of work and time, and the salary is not enough.  He says I will be more beneficial helping them.

But I don’t think.  I don’t think.  I will get a better job, with a higher salary and fewer working hours.  I will go abroad for my master’s degree.  My future is better like this—with skills of speaking English and one more foreign language.  Maybe German.

I read something from a website, that Buddhism’s representative, Bogd Javzandamba made the first Mongolian hat.  He came to Mongolia to be the head of Buddhism, but it ended up he was also the important person in the government of Mongolia, and he designed a hat for all the Mongolian people, especially men.  It expresses what it is to be Mongolian, this hat.

But, I don’t know which hat is this hat.  There was no picture, just the story.  It might be any of the hats.  It was a long time ago. 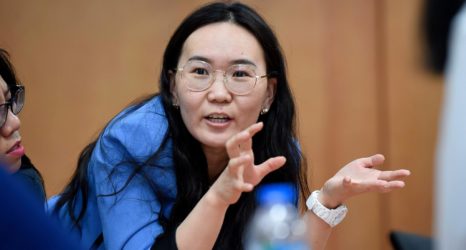