Cooperatives bring people together to work collectively—maximizing income potential and building financial security in the long-term. In poor and marginalized communities, cooperative membership can be life-changing, particularly for women.

I have seen this first-hand in Sierra Leone, where Feed the Minds has worked with our local partner MEWODA to set up women’s cooperatives. To mark the UN’s International Day of Cooperatives on July 7, I wanted to share my experience of cooperatives and highlight the incredible impact they can have.

Bombali is one of the poorest and most food insecure districts in Sierra Leone, itself one of the poorest countries in the world. Life here is incredibly difficult and it’s hard to imagine just how much these communities have suffered; 11 years of armed conflict during the civil war, followed by the deadly Ebola outbreak just 13 years later, have had devastating effects on society and the economy, and the recovery process has been slow. The majority of the population in Bombali are dependent on agriculture and some of the poorest are small scale rural farmers, particularly women. Gender discrimination and traditional patriarchal culture puts these women at an even greater disadvantage. With our local partner we have been empowering 2,500 rural women through cooperative formation, agricultural skills development and gender awareness raising.

The first time I visited Bombali was in March 2016, just as the World Health Organisation declared Sierra Leone to be free of Ebola and shortly after the cooperatives were formed. Since then, I have been lucky enough to visit four times and each time, I am always amazed by how much the groups have progressed and how significant the impact of cooperative membership can be.

During my most recent visit, we travelled to Rosengbeh village to meet with some of the women and learn a little bit more about how their lives have changed since they joined their local cooperative. Rosengbeh is a remote village in the forest which is only accessible via a dirt track. It is hard enough to get to with a 4×4; let alone on a bike or on foot which is the reality for people living there. I always feel so humbled by the colourful welcomes given to me by cooperatives and this time was no different. When we arrived, I could hear the sounds of singing and drumming in the distance, and suddenly the cooperative appeared—dancing, clapping and welcoming me with a traditional song. These women have lived through such hardship, yet their energy, warmth and optimism never ceases to amaze me.

I spent a couple of hours in Rosengbeh talking with cooperative members about what they have learnt through the project and how it has affected their day-to-day lives. A conversation with one woman, named Fatu, has really stayed with me; not only because it exemplifies how difficult life can be for rural women in Sierra Leone, but also because it highlights just how valuable cooperatives are for supporting and empowering some of the most vulnerable and marginalised. Fatu lost her husband during the Ebola epidemic and was left to care for their children alone. She also lost her eldest son, her brother and most of his family to the virus. At the time, Fatu feared for her family’s future; she had no one else to depend on, was living in extreme poverty and had more mouths to feed with even less income.

For Fatu, working with other women in her village has been one of the best things about joining a cooperative. As a result of training, the women are able to organise themselves and work collectively. The benefits of this are significant. Not only does it enable women to share the workload and sell in bulk for greater profit, but it has also created a remarkable sense of solidarity and cohesion that did not previously exist. Women are supporting one another and Fatu no longer feels alone. She has been able to improve her quality of life using the additional income and can now take better care of her children. Since joining the cooperative, Fatu has a greater sense of security and feels more positive about the future.

Cooperatives are an effective mechanism for supporting sustainable development and empowering communities. Bringing small-scale farmers together increases their power and ability to engage in the market. They have a stronger voice and ability to negotiate. They can sell in bulk and are better able to avoid exploitation from traders. Cooperatives generate profit that stays local and is invested in the community, facilitating wider improvements and supporting long-term change beyond simply the members—and I have seen first-hand the benefits cooperatives can bring to women’s lives.

From our experience in Sierra Leone, cooperatives can raise the status of women and challenge gender inequality. Women are now able to secure an income, they can work together effectively and manage themselves democratically, their confidence has increased and their husbands recognise the value of cooperative membership for the household. Financial security has improved as a result of having a more dependable income stream and cooperatives are collectively saving to support ongoing farming and marketing activities.

Hannah Walters is the Programme Manager at Feed the Minds, an international development charity that supports some of the world’s most marginalised individuals and communities through practical adult education projects. 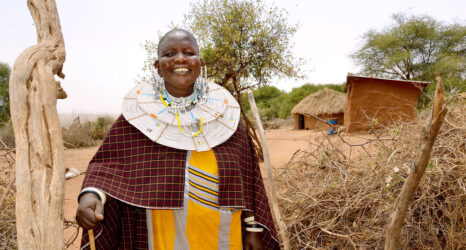 What Is Rightfully Hers: Women’s Land and Property Rights in East Africa