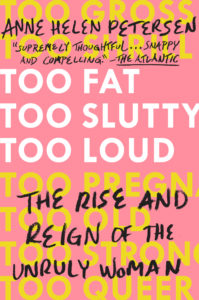 The introduction to this book needed revising.

When I handed in the first draft to my editor, it included a sentence that read, “Hillary Clinton won the election by [INSERT NUMBER HERE] votes.” It wasn’t intended as wishful, partisan thinking; Clinton’s win was a presumed fact, on both sides of the political spectrum. Of course, Clinton did end up winning the popular vote. But when Donald Trump won the electoral college, I knew I had some significant revising—and not just of the Clinton chapter—ahead of me. Looking back, the subtitle of the book should’ve been expanded to: The Rise, Reign and Rejection of the Unruly Woman.

Since the book was released last year, there’s so much I wish I could revise, expand and elaborate on. I’d add chapters; I’d spend pages talking about Serena Williams’s cover for Vanity Fair; I’d consider the ways the entire Kardashian family has found themselves in a feedback loop wherein pregnancy has become the primary means of creating new chapters in the melodrama of their otherwise incredibly ruly lives. I’d talk about Madonna’s attempt to re-center motherhood as one of her primary meanings, and Caitlyn Jenner’s newfound irrelevance and Clinton’s refusal to go away quietly.

But most of all I’d talk about #MeToo. My primary concern at the time of publication was how we could at once acknowledge the backlash—against women in general, but particularly against unruliness—we were occupying, and what we could do to blunt it. As I told audiences across the country during my book tour, the history of feminism is two steps forward, one step back—so how can we make that step back smaller?

During the summer of 2017, my general answer was mindfulness: thinking through how our own reactions to unruliness contribute to the larger backlash. I took comfort in the number of readers who told me that the book had led them to interrogate and reconsider their reactions to the women in the book—and the unruly parts of themselves.

But I remained largely pessimistic. I watched as Kamala Harris and Elizabeth Warren were attacked for “persisting” in public political spaces. I saw Clinton become even more monstrous in the eyes of both the far left and the right. I witnessed the revulsion and fear percolating around the Women’s March and all the “nasty pussies” who participated in it. I read tweets from the president that ridiculed a newscaster for plastic surgery and suggested that a female senator would “do anything” for political support. Talk too much, you’re a slut. Resist the president, you’re a hag. Refuse to disappear, you’re the problem. To be unruly in 2017 was to inflame the most base, misogynistic impulses of our society.

Which is why, when the revelations about Harvey Weinstein first became public in early October 2017, I was skeptical as to what, if any, effect it would have on Hollywood or society at large. Hollywood, after all, condenses and reflects society’s larger, and often ugly, ideological tendencies: the supremacy of whiteness, the capitalist ethos, the presumption of heterosexuality, the invisibility of women who aren’t hot or thin or under the age of forty-two. Hollywood fancies itself one of the most progressive places in the world, even as it reveals itself—as both an industry and a producer of art—to be one of the most regressive and conservative. The details of Weinstein’s behavior, and the sheer number of actors, agents, producers, publicists, assistants and gossip columnists who were complicit in its perpetuation, underline just how little has changed since the days of classic Hollywood. Women are still paid less in Hollywood. Women have far fewer chances to produce and direct. Women have less power. Put bluntly, Hollywood—like society—values women less than men.

The charges against Weinstein—coupled with the veritable flood of allegations against other men in Hollywood that followed, and the millions of women who proclaimed they’d also been subject to sexual harassment or assault—doesn’t just suggest that society values women less than men. It announces it as truth. Same for the cascade of allegations that have now affected nearly every industry and corner of American life: They provide irrefutable evidence that our society does not value, trust or elevate women the same way it values, trusts or elevates men. And that doesn’t even account for the way that women who are older, or not white, or fatter, or queer or possess any other unruly quality, fit into that equation.

There is a reason, after all, that the female stars who first went on the record against Weinstein were older, with their mainstream careers largely over. They could afford to perform the ultimate unruly act—calling attention to a man, and a system, that not only devalued and abused them, but so many other women as well, all in the service of continued patriarchal control—in part because they had so little left to lose. In truth, it’s a bit of perfect justice: that women so devalued by the system would be the ones to help bring it down.

The #MeToo movement has provided a necessary reckoning: proof that feminism is still very much necessary. But to actually solve these problems—to right these inequities, to transform qualities that are viewed as “too much,” whether as concerns class or race or sexuality or behavior—requires a deeply introspective and intersectional feminism. It demands movements like #TimesUp, which has devoted itself not just to “awareness,” but to actually changing the ratio of representation in Hollywood—and raising millions of dollars to assist those in all manner of industries, from farm workers to actors, in taking the sort of legal action that will force equal treatment when it does not come naturally.

In two years, I might look back on this foreword and feel deep sadness at the lost potential. But in this moment, I feel great pride, and maybe something as reckless as hope, that we can withstand the various backlashes, answering mindfully but forcefully when questions arise as to whether the movement has “gone too far.” That reaction, after all, is rooted in a fear of unruliness: That we will be believed when we call out abuse. That we will advocate for equal pay and receive it. That we will draw a line on how we want to be treated and it will be respected. That our value will not be determined based on our pliability to sexual advances or our ability to hew to societal standards of attractiveness. That we will be ruthless in calling out hypocrisy and inclusive when it comes to those granted less societal power because of their age, class, race, religion,  or sexual identity. That in so doing, we will accumulate too much power.

“Too much power” is code for “as much power as white men,” the fear that women will conduct themselves with the freedom and confidence afforded to white men and, by extension, expand the boundaries of “acceptable” behavior and ways of being in the world.

It’s impossible to say whether #MeToo would’ve happened—and spread with the force it did—without Trump’s election. Given the very real danger and fear that has spread in the wake of the Trump presidency, I’m deeply reticent to suggest that his election was a “necessary” backdrop for the revelations of the last year. But Trump and the culture of misogyny that surrounds him did more than make our current backlash visible. It galvanized millions and rendered their most unruly characteristics—their voices, their presence in public spaces, their persistence, their unfiltered anger—into the most abrasive yet deeply effective sort of tools.

Unruliness has always been about making people uncomfortable, about making people talk, about challenging the status quo. Which is why, as we plot a way forward from the revelations of this current cultural moment, it’s more necessary, more utile, more worthy of cultivation—in both the women we admire and in ourselves—than ever.

Anne Helen Petersen received her PhD in media studies from the University of Texas, where she studied the history of the gossip industry. Today, she writes about culture, celebrity, feminism and The West for BuzzFeed News. She lives in Missoula, Montana.