Daring to Remember: What Nursing School Taught Me About Abortion - Ms. Magazine
Skip to content

I was a naïve 20-year-old kid from a potato farm in southern Oregon when I came to New York City in 1963 to attend Columbia’s nursing school.

We began our nursing education learning discipline and order. We had a class in how to starch and iron our organdy caps. Our bibs and aprons were so stiffly starched that they could stand on their own. We flexed our detachable collars to loosen them, waxed the inside of the collar to prevent a chaffed neck. The first two years we wore black stockings and black service oxfords, symbolizing that we were novices. I bought my black stockings from a tiny store on Broadway where a Puerto Rican woman sold seconds, thirds and fourths. (I only bought the fourths one time—as the dye was uneven and sizing unpredictable!)

The wards were as orderly as our outfits. We worked in the public section of the medical center, never in the private pavilion. Each ward had 12 beds, six on each side of a room with tall windows looking out on the Hudson River. The beds had cloth privacy curtains to draw for baths and bedpans. Window shades were lined up at the same level. Pillow cases all faced the end of the ward. A nurses’ station looked out onto the ward through glass windows.

As students, we stood at attention by our patient’s beds when the medical students, interns, residents and attending physicians made rounds—the medical staff was male, the nursing staff female. Once, as I stood beside an old Jewish man while the doctors discussed his case, he suddenly reached under my bib and grabbed my breast, proclaiming: “A nice handful, boys!” I blushed, stepped out of reach and remained silent. The medical students tried to keep from laughing. The troop moved on to the next bed without a word. 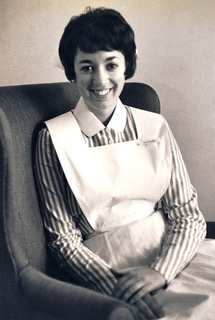 I got a good education at Columbia, filled with solid skills. But I learned even more about life as I listened to my patients. A woman in the maternity ward interrupted my badly taught breastfeeding class to ask how to keep rats from climbing crib legs and biting her baby. I stood speechless while the other women gave advice. Rats climbing crib legs? Who was the teacher, who was the student?

In 1965, I was a third year nursing student, just out of black stockings. At the end of two years, we sent our black stockings into the air over the Hudson River tied to helium balloons; we retired worn black oxfords. Now we proudly wore our striped dresses and bib aprons with white stockings and white oxfords.

She was pale, weak and shaking with a high fever. Her blood pressure was dangerously low. I hurried to the nurses’ station, reported to the head nurse and called out to an intern. As the intern was starting an IV, he gathered a scant history; she whispered about a back-alley abortion, gave her husband’s name and workplace. Someone ran to call her husband as she slipped from consciousness into septic shock.

Within minutes, doctors began to gather—then residents, then attending physicians. The head nurse took charge of gathering supplies, calling the lab and directing staff nurses. A lab tech ran from the room, hurrying blood samples to the lab for analysis. Urgent calls went to the pharmacy for antibiotics hoping one would stop the infection raging in her body.

As nurses and doctors crowded around her bed, the head nurse took me aside. I was the least skilled person on the ward, so she assigned me to sit in the hall and watch for the woman’s husband. I wanted to be one of the skilled staff nurses, wanted their knowledge and confidence. What in the world would I say to her husband? I’d rather have run samples to the lab or gone to the pharmacy for drugs, but I’d been given an order.

I stood anxiously outside the big, open double doors to the ward, shifting from one foot to the other. I kept one eye on the activity inside and one eye on the long corridor leading to the elevator. When he appeared at a distance, I knew him.

He looked so out of place, hurrying along in overalls and work boots, carrying a black metal lunch pail. He’d taken off his cap, his black hair tousled and sweaty. Anxiety hurried his gait and worried his face. I called his name and asked if he was the woman’s husband. He nodded and I led him to a hard wooden bench where we could not see into the ward.

“Your wife came to the hospital this afternoon,” I told him, “very sick with an infection. She went to an abortionist and something went very wrong.” He clutched his lunch pail, his face registering shock. After a few minutes, he spoke.

“I didn’t know she was pregnant again,” he told me. “She didn’t tell me.” Hospital staff hurried in and out of the ward. The phone in the nurses’ station rang constantly. “We’ve got five kids. We’re good Catholics. We never use birth control.” As we sat in silence, I imagined five little children in a dingy crowded apartment.

I made the kind of conversation you use when you don’t know what to say: “They’re doing everything they can.” He didn’t ask to see her, and I never thought to take him to her bedside. We sat on that hard bench in uncomfortable silence for what seemed like a long time. I felt frightened by the gravity of the situation and by my inability to think of anything else to say. We stared at the floor, looking up when we heard footsteps of the staff hurrying in and out of the nurses’ station.

Finally, a tall white-coated older doctor approached us, his face grim. “We were unable to save her,” he told us. “She died of massive infection.” I was in shock as the attending physician led the man away to a private room. I imagined him going home to his children, wondered how he would manage.

That day I learned how little I knew about human sexuality and the politics of reproductive rights. Birth control pills had been approved for use but were mostly unavailable. Abortion was illegal. Now I understood the consequences.

Eight years later, when Roe v. Wade ended abortion bans nationwide, I fully knew it’s importance. I thought back to that day, to that woman, to her husband coming down the corridor with his empty lunchbox in hand.