The Case for Gender Equality—On This Day and Every Other - Ms. Magazine
Skip to content

Today, on International Day of the Girl, the world celebrates the many things a girl can be. Lean in, dream big—those are the empowering messages we all tell the girls in our lives. But despite remarkable progress in some quarters, gender inequality and disempowerment still persist and are a root cause of many barriers to sustainable development around the world.

Discrimination against girls critically impacts children’s ability to survive, learn and live a life free from violence. Without a strong start in life, a girl’s future is likely to be determined for her.

Gender inequality leaves entire regions behind: according to the United Nations, Sub-Saharan Africa alone loses US $95 billion per year due to gender inequality. As a universal human right and a means to overcoming poverty and discrimination, gender equality must remain at the center of our U.S. foreign policy and development assistance.

The journey of nations to meet their own development needs depends on breaking down the barriers to enhance powerful contributions of women and girls. To improve development outcomes everywhere, the U.S. government must invest in gender analysis to look at the differences between progress for girls and boys. Only then can we identify and work to transform the root causes of gender inequality, including addressing discriminatory social norms and institutions, as well as advocating for and fostering legislation and policies that promote gender equality.

Child marriage is a good example of a harmful practice that affects not only girls but whole societies.  Around 1 in 5 women and girls in the world today were married as children – 1 in 3 of those were married before the age of 15. To a policymaker seeking to put an end to this, legal interventions may seem like the answer. But while they’re a key piece of the puzzle, new analysis by Save the Children shows that a startling 51 million child marriages could be averted by achieving universal secondary education for girls.

This is what putting gender equality at the center of all areas of foreign policy and international assistance looks like: Reducing the harmful ways in which gender inequality combines with other factors to make it so much harder for girls to reach their potential.

The U.S. State Department and the U.S. Agency for International Development (USAID) need robust funding and staffing to continue making critical investments in peace and security, economic development, education, nutrition, healthcare and more. But if gender equality and women’s and girl’s empowerment aren’t at the center of all of these, the results just won’t be what we all want for children.

USAID has found that when 10 percent more girls go to school, a nation’s GDP increases, on average, by 3 percent. That’s something they wouldn’t have seen without a gender equality approach. Without sex- and age-disaggregated data, they wouldn’t even know that of the 25 million children currently out of primary school around the world, 15 million are girls. Without gender analysis, they would overlook many of the reasons: boys’ education is often prioritized, girls face an increased risk of violence between home and school and from their teachers and girls who marry before they reach adulthood almost always abandon their formal education. 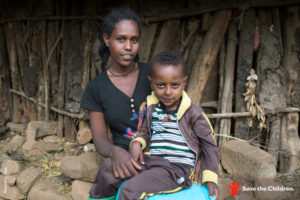 Salam, pictured here with her young son Mesfin, was able to leave the abusive marriage she was forced to enter at age 13. Save the Children’s “Keep it Real Program” supported her return to school, where she rose to the top of her class.

But what about the other 134 million girls who will be married as children between 2018 and 2030 if the world doesn’t act? They, too, can become teachers, journalists and entrepreneurs—but both research and experience tell us they’re more likely to become mothers, before their bodies are ready for it, or experience domestic violence.

An investment in gender equality and girls’ empowerment yields tremendous results—not only in the individual lives of women and girls, but for the future we all share. That’s why we at Save the Children have put gender equality at the top of our agenda. On this International Day of the Girl, we’re calling on the U.S. government to do the same.

This post originally appeared on the Save the Children blog. Republished with permission.

Carolyn Miles is President and Chief Executive Officer of Save the Children, the Co-Chair of the U.S. Global Leadership Coalition and the Chair of InterAction. She was inducted into the Connecticut Women’s Hall of Fame in 2015 and received the Distinguished Alumna Award from the University of Virginia Maxine Platzer Lynn Women’s Center in 2017. You can learn more about Carolyn on her blog, Logging Miles, or on Twitter @carolynsave. 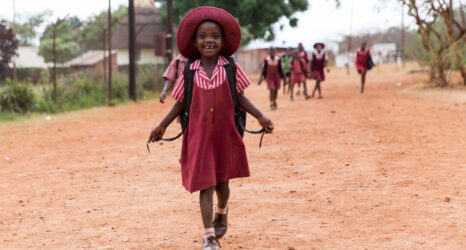