DUMP TRUMP: Lesbian Writers Weigh in on Resistance and the Midterms - Ms. Magazine
Skip to content

Dump Trump. It’s a simple idea—and one more pressing than ever in advance of the midterm elections. It’s also at the core of the 110th issue of the historic multicultural lesbian literary journal Sinister Wisdom.

In the days, weeks and months following the November 2016 election, two notable things happened for me as the editor and publisher of Sinister Wisdom.

First, support for the journal and its work grew exponentially; fear of the Trump presidency reminded many of us of the importance of lesbian institutions like Sinister Wisdom. More women subscribed to the journal and supported it financially, and now, while the journal is hardly flush financially, it has money to pay the printer bills and bills to the mail house as well as create a few extras to delight our readers and supporters. Sinister Wisdom still relies on my volunteer time and energy to keep it afloat, along with increasingly time and volunteer energy from young women as interns and volunteers. It is hardly an endowed institution, but through the renewed generosity of lesbians, we continue our work.

The second thing that happened is that the Sinister Wisdom team started talking about the importance of resistance and regime change in 2018. The idea of a Dump Trump issue emerged from those conversations, and members of the Sinister Wisdom board of directors, Cheryl Clarke and Red Washburn, with key volunteers Morgan Gwenwald and Stevie Jones, produced the 110th issue of Sinister Wisdom and titled with the same phrase.

Essays by Audre Lorde, Adrienne Rich, Minnie Bruce Pratt, Mab Segrest, Joan Nestle, Julia Penelope, Anita Cornwell and dozens of others shaped my thinking as a young reader and writer and my political sensibilities. Journals like Sinister Wisdom are where I found many of these important and influential essays. Lesbian political writing has always been important, and our Dump Trump issue continues that tradition by shining a light on the perspectives and analysis of lesbian writers and activists that are as important as ever in this moment of political resistance.

Sinister Wisdom was founded in Charlotte, North Carolina in 1976, marking a realization of the vision of Harriet Desmoines and Catherine Nicholson where lesbian is one embodiment of resistance and regime change. The regime remains malleable—patriarchy, misogyny, white supremacy, heterosexual supremacy, neoliberalism, capitalism—but boisterous resistance is our legacy, and the spirit that invites us to engage another day. 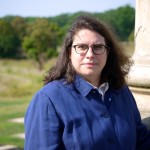 Julie R. Enszer, Ph.D., is a visiting assistant professor of women’s studies at the University of Maryland. She is writing a history of lesbian-feminist presses from 1969 until 2000 and is author of Sisterhood and Handmade Love. She is editor of Milk & Honey: A Celebration of Jewish Lesbian Poetry, a finalist for the Lambda Literary Award in Lesbian Poetry. She has her MFA and Ph.D. from the University of Maryland. She is the editor of Sinister Wisdom, a multicultural lesbian literary and art journal, and a regular book reviewer for the Lambda Book Report and Calyx. You can read more of her work at www.JulieREnszer.com.