Several weeks after the controversial appointment to the Supreme Court of the second male justice accused of alleged sexual misconduct, Sandra Day O’Connor, the first female justice ever to serve on that distinguished body, announced that she was retiring from public life.

These two events—the quiet departure of a woman famous for proving, by word and deed, that it is “possible to disagree without being disagreeable,” and the noisy arrival of a man notorious for, among other unfortunate reasons, his disagreeableness toward those who disagree with him—will be forever linked in collective memory.

It was an unnerving coincidence, but there have been other parallels, equally salutary, during the past few weeks.

Apart from the hype, hope and hysteria of the midterms filling the air with predictions, protests and news of voter suppression while the Mueller investigation continues to rumble imperturbably underground; apart from the clatter of the helicopter chopping up the questions of the press on the White House lawn as Turkish officials scramble for a journalist’s body parts in a forest outside Istanbul—another coincidence has occurred that is even more curious, even more ironic.

Vladimir Putin chose one week ago to inform the world that the end of American global influence is nigh. He made this announcement at the Valdai forum, just as O’Connor was penning her moving valediction to friends and fellow Americans, calling for “new leaders to make civic learning and civic engagement a reality for all.” He probably had no idea that she was writing those words.

We are often blind to what is most obvious. Half a century after restrictions were removed on voting rights in many societies, women are still grossly underrepresented in political decision-making positions. As recently as 2017, only nine heads of state and eight of 194 heads of government were women. Women are also rarely found in the top echelons of the corporate world: Among the Fortune 500 last year, only 21 companies, or a mere 4.2 percent, had a woman chief executive; the top 350 companies in Europe only had 4 percent.

And yet, the facts are staring at us in the face. The evidence is palpable. It is better for business if women rise to executive positions. It is better for security on the streets, at home and in the workplace when women are protected by the rule of law. It is better for society as a whole when women not only vote, but engage in civic responsibilities—with facts at their command, with knowledge at their disposal, and with resolve.

They say the darkest hour is just before the dawn. One of the ironies of our times is not that civility is being daily eroded; that truth is being undermined; or that, if Putin is to be believed, America will only ever be as great as a red baseball cap.

No: The ultimate paradox of our times is that so many people in this country still care about injustice and corruption. America is not yet a society of cynics. Its citizens have not yet given up hope in their country—they want to believe that there are better ways to run government, to provide healthcare, to protect their children from being gunned down in classrooms. An overwhelming majority of Americans actually do believe there is a distinction between facts and fiction, truth and lies.  They do not want to live in a polarized society, divided against themselves. And many of them are women.

An unprecedented number of women are entering politics in these midterm elections, and at this juncture in American history, there could be more women assuming decision-making positions than ever before. As a result, we may see more parity in the workforce, more legislation implemented for education and against violence, more women contributing to the improvement of society. This trend is also being echoed worldwide: In 1995, women only occupied 10 percent of parliamentary positions,; they have now reached the 23 percent mark.

Will women finally usher in a radical change, the paradigm shift we have been waiting for? Perhaps the demise of hegemony, anticipated with such satisfaction by some, is actually the dawn of gender equality.

If so, perhaps America might become first, indeed, in leading partisan politics and self-interest to the exit and inviting “the common good,” so treasured by O’Connor, to enter the public arena at last.

Bahiyyih Nakhjavani is the co-author of Equality for Women = Prosperity for All: The Disastrous Global Crisis of Gender Inequality, just released by St. Martin’s Press. 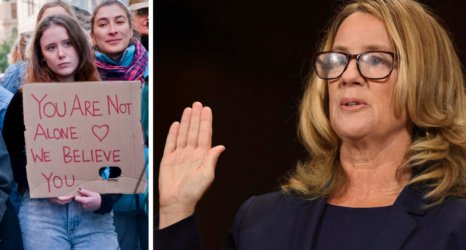 Fight & Flight: On Grassroots Resistance, the Supreme Court, and the Women Who Flew in the Face of Kavanaugh

Six Things Feminists Should Know About the War on Drugs
The Ms. Q&A With Ani DiFranco: “You Have License To Be All the Aspects of Yourself and To Be Unashamed of Them”
Policing In America: A Deadly Disease Rooted in Slavery [Who Killed George Floyd? Part II]