A special issue of Peace Science Digest bridges academic theory and day-to-day practice in the field of foreign affairs—and centers issues of women, peace and security. 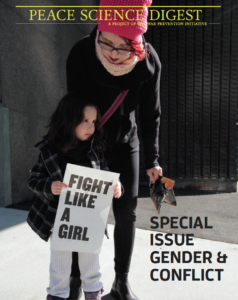 The “Gender and Conflict” issue breaks down five key areas of theory alongside case studies that guide those in the foreign affairs field toward praxis. At the core of their venture is the notion that gender is not an issue that can be pushed aside and ignored while the violence of conflict is addressed—instead, gender must be seen as integral and central to the solutions and rebuilding processes before, during and after conflict. Within its pages is a conversation that goes beyond urging more inclusion, and into the nitty-gritty aspects of applying data- and mission-driven models of diversity and inclusivity that unravel patriarchy and build peace.

The Digest‘s opening article exposes the links between both masculinity and militarism and gender and conflict. “We cannot think of security without thinking about the militarist logics that are deeply embedded in it,” its authors write. “That militarism in everyday life is ‘justified by reference to security’—and the reliance of both on gender hierarchies and gendered myths/images.”

A later piece unpacks idea of women’s imperative involvement in peacebuilding, calling attention to the importance of championing women’s roles in peace and security matters without relying on normative models of gender or straying toward fetishization and tokenization. “Women often emphasized this role, drawing on both local norms—like their ‘maternal responsibility,’ tied to their Catholic faith through the image of Mary, that entailed an ‘obligation to protect Bougainville and its people’—and global norms enshrined in UNSCR 1325 to buttress their participation in peace work,” its author declares. “Peacebuilding became a way to re-energize traditional forms of matrilineal authority that had been degraded over the course of the armed conflict, and women peacebuilders also drew on their common identity as women to bridge political differences across Bougainville.”

Women’s participation has been proven to lead to more sustainable peace agreements and better social outcomes in conflict resolution, but women around the world still lack seats at the peace-making table. The disconnect between data and practice in this instance arises, in part, from the fact that academics have conceptions of field work that are limited—and that though theories about women peace and security can be groundbreaking and thought-provoking, they do little to change the lives of women in conflict unless there is a practical application for them on the ground.

“Every peace and security challenge must be considered through a gender lens,” Ellen Freidman, Executive Director of The Compton Foundation, told Ms. “When policymakers, academics and activists alike are ‘gender blind,’ they ignore one of the best leverage points for conflict prevention and resolution and miss the chance to work toward a more fundamental transformation that can result in greater equity and sustainable peace.”

Enter the Peace Science Digest’s special issue. Confronting the chasm between academia and field work is a pivotal part of expanding conversation and action in the trenches around women’s leadership in issues of peace and security—and improving outcomes for communities on the ground relying on peace-makers to do good work. That gap closes through a better theoretical understanding of the social functions and outcomes of gender and new models for moving from theory to practice.

G7 Commitments to Gender Equality: Will Leaders Back Words with Action?