During her time in the U.S. Senate, and as a deputy and then-elected District Attorney in San Francisco and Attorney General of California, Senator Kamala Harris has earned a reputation as a firebrand. Her direct and fierce questions for Trump appointees have gone viral, and her powerful words have inspired activists across the country protesting family separation and economic inequality. 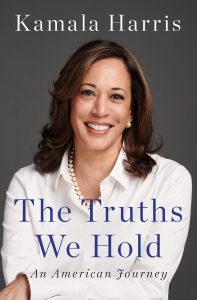 Harris’ memoir, The Truths We Hold: An American Journey, released this week, gives readers a glimpse into the journey which shaped her career as a self-described “joyful warrior” in what she sees as a “battle for the soul of the country.” But this book is more than just a personal story. In true Harris fashion, it’s also a call to arms.

The Truths We Hold explores Harris’ own struggle to speak truth to power and spark change—in politics and in her own everyday life. In an exclusive audio clip from the audiobook for Ms. readers, the prominent politician lays out a number of critical economic issues facing our nation—including debt-free college, affordable housing and child care—and implores all of us to face down the opposition and speak up, as loudly as possible, to demand the change we seek.

“We have work to do. Hard work. Indispensable work,” Harris declares. “We have everything we need, all of the raw ingredients, to build an economy for the 21st century that is fair and sturdy, an economy that rewards the work of those who sustain it. But we have to hurry—and we have to be willing to speak truth.”

Audio excerpted courtesy Penguin Random House Audio from The Truths We Hold: An American Journey, by Kamala Harris, read by the author.