Katherine Spillar, the executive director and co-founder of the Feminist Majority Foundation (FMF) and executive editor of Ms. magazine, was presented with the degree of Doctor of Letters, honoris causa, from Texas Christian University (TCU) at its Winter 2018 Commencement. 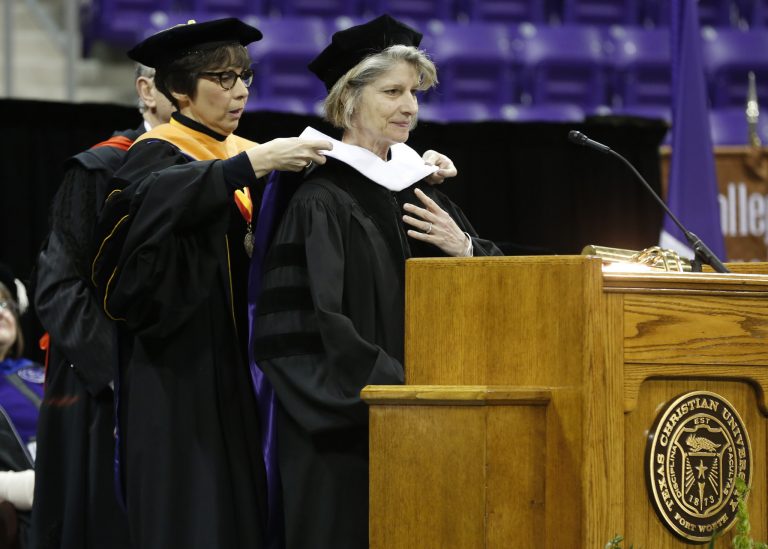 Since FMF’s founding in 1987, Spillar has been a driving force in executing the organization’s diverse programs that aim to secure women’s rights domestically and globally. She has led efforts to reduce anti-abortion extremist violence targeting women’s health clinics, including championing the use of buffer zones and the passage of the federal Freedom of Access to Clinic Entrances Act. Spillar also led FMF’s National Center for Women and Policing to curb police brutality, integrate more women into police departments and improve law enforcement response to violence against women.

TCU’s tribute to Spillar celebrated her accomplishments on the global scale as well, recognizing the Feminist Majority Foundation’s nomination for a Nobel Peace Prize in 1997. This was a result of FMF’s Campaign to Stop Gender Apartheid in Afghanistan, resulting in the U.S. and United Nations’ official decision not to recognize the Taliban’s rule.

As the executive editor of Ms. magazine, Spillar oversees editorial and online content, as well as the magazine’s program to be used as a teaching text in Women’s Studies and other college courses. Under her leadership, Ms. has increased its investigative reporting, becoming one of the largest print and online feminist news publications.

One year after the vicious murder of abortion provider Dr. George Tiller, Ms. published a groundbreaking investigation exposing the connections between Tiller’s convicted murderer, Scott Roeder, and anti-abortion extremists who promote violence. The article, “Not a Lone Wolf,” won the prestigious “Maggie Award” from the Western Publisher’s Association for best feature article and a national award from Planned Parenthood Federation of America.

“Kathy Spillar is an amazing leader who is beyond deserving of this recognition. She is tireless, dedicated and effective, truly changing the lives of countless women,” said Eleanor Smeal, president of the Feminist Majority Foundation. “I have worked shoulder to shoulder with her for over 30 years, and I can say unequivocally that the women’s rights movement is lucky to have her on the frontlines.”