The Ms. Q&A: What Alexandra Robbins Learned as an Undercover Greek – Ms. Magazine
Skip to content

It’s been nearly 15 years since author and journalist Alexandria Robbins famously went undercover at an unnamed college to write Pledged: The Secret Life of Sororities. The controversial exposé about collegiate women’s experiences in Greek life earned Robbins both critical acclaim (Pledged was one of five of her books to become a New York Times bestseller) and furious criticism (largely from Greek organizations, some of whom banned their members from reading the book).

Nevertheless, Robbins persisted in writing about unknown legends. The Overachievers: The Secret Life of Driven Kids landed her an interview on The Colbert Report; The Geeks Shall Inherit the Earth: Popularity, Quirk Theory and Why Outsiders Thrive After High School was awarded a Goodreads Choice Award for Best Nonfiction Book of the Year.

Robbins has an intuitive way of foreseeing grit that her peers would do well to strive for. While other journalists shuffle after politicians and celebrities, stirring the gumbo pot of bewildering controversy, Robbins instead chooses to stand back—decoding the big picture before deciding when to zoom in, and pursuing not what might garner the most clicks but what contributes the most imperative knowledge.

Fraternity: An Inside Look at a Year of College Boys Becoming Men is born of that mold—but not in the same way as Pledged. That was a different era, a different lens. Fraternity, an unfiltered, candid examination of toxic masculinity in Greek life, is absolutely a product of the #MeToo movement—yet there are no villains or clear bad guys. Writing an anti-fraternity manifesto would likely have been an infinitely easier choice for Robbins, but it wasn’t the path she took. Instead, she sought successfully to weave hope from chaos.

Robbins spoke to Ms. about patriarchy on campus, going undercover in the Greek system and what it might take to reshape college culture. 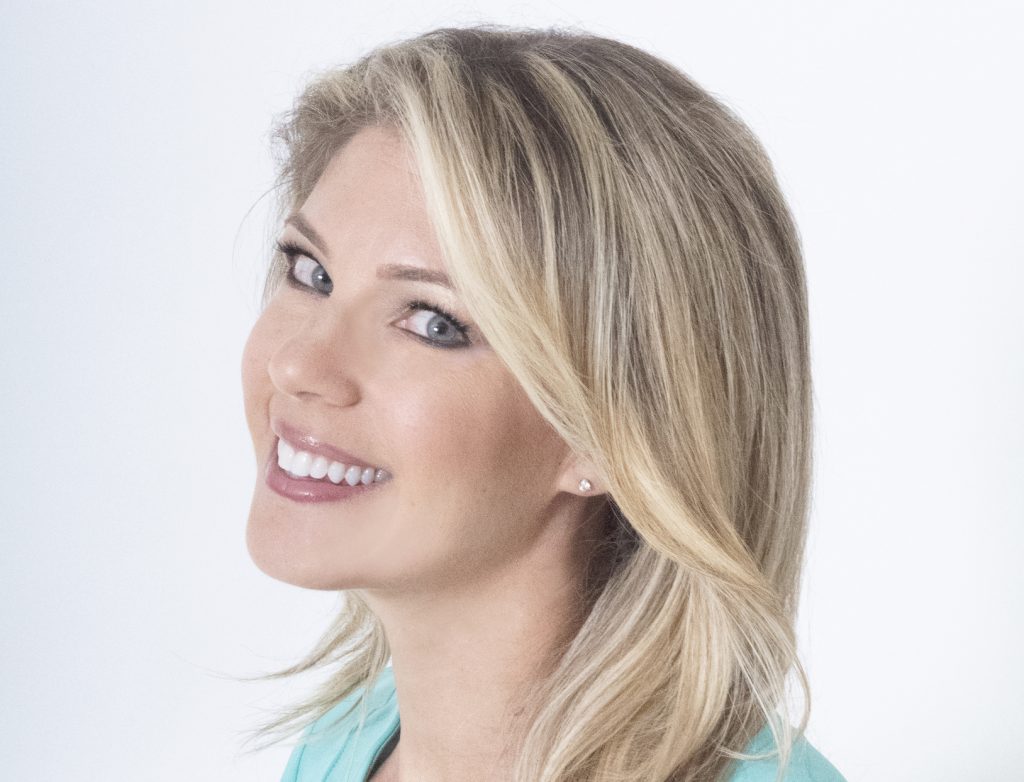 Pledged is an infamous investigative exposé of the Greek system. Fraternity seems more educational and straight-forward. What motivated your approach?

I think both books are fast-paced stories that also happen to be educational and straightforward—and surprising, unexpected viewpoints that the public hasn’t heard before. (As of now.) The difference in the books is the way people perceive the subcultures.

In my work, I strive to represent voices that are not heard. When I wrote Pledged, the public knew little about sororities beyond their pearls and purity image, so it came across as an exposé. Today, the public knows little about fraternities besides what they see in the headlines, which misrepresent many of these undergrads.

I wanted to represent what it’s like to be a college guy today, from the point of view of the guys themselves. Because of the times, Fraternity is also a broader look at masculinity in America. Readers—whether they are students, parents, educators or just interested in a good story—haven’t seen this approach to this topic.

I had a journalism professor once refer to those kinds of characters—members of under-represented or misrepresented communities—as “unknown legends.” What draws you to them?

I like that: “unknown legends.” As a storyteller, I prefer to tell the tales that people haven’t heard before. I try to write them in a way that both makes them root for the real-life “characters” and gives them useful information in the process.

In the case of Fraternity, readers will learn a lot about the pressures and mindsets of boys of all ages—and their thoughts about masculinity, which is particularly crucial to understand in today’s landscape. My favorite kinds of books are the ones you can’t put down because of the story and that you remember after reading because you feel like you’ve learned something important and helpful in the process. Like a smart beach read. So that’s what I strive to write. 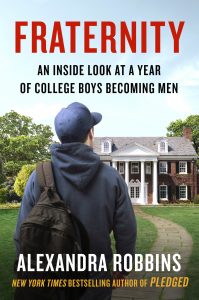 How did you find Jake and Oliver, the two “lead” characters in Fraternity? How did you know that they were the right men to follow in this adventure?

I was looking for good guys: intelligent, nice, genuine and committed to having a positive, healthy fraternity experience. Neither of their stories turned out how I had expected, and there were some unexpected twists and surprises during the year. I also wanted to follow guys who were self-aware and willing to share with readers even the intimate details about their lives. Jake was amazingly candid about not just his fraternity life, but also his quest to conquer his social awkwardness, and even embarrassing details about hookups.

Did you see anything in them that you saw in Vicki, Sabrina, Caitlin or Amy—your “leads” from Pledged?

Finding sources for Pledged was a bit of a scramble, because my plan to openly embed in a sorority house was derailed at the last minute by the chapter advisor. With Fraternity, I had much more time to get to know Jake and Oliver before their year-in-the-life stories began. With that said, I’m fans of all the “main characters” from both books. They are all good people whom readers like, and they were all willing to share everything about their college lives so that readers could get the full picture.

One reason why Pledged became so popular was the undercover method of reporting you used—but that approach would be near-impossible for a woman trying to cover fraternity life. What tactics did you use instead?

Fraternity is also a voyeuristic, fly-on-the-wall look inside Greek houses. It’s similar to Pledged in terms of the stories and secrets, though Fraternity had more unexpected plot twists.

I can’t go into details about the process, but suffice it to say that readers will feel like they’re right there with Jake and Oliver—and there’s a reason for that. I can add that there were some covert techniques involved in the reporting, and that the process took about the same time as it did for Pledged. The storytelling should read similarly, I think.

Do you believe that social media has had a significant impact on fraternity life overall? (Within the actual fraternities, I mean, not viral photos or videos of fraternity members doing problematic things.)

I believe social media has had a significant impact on all students, whether or not they’re Greek. Social media can take up a ridiculous amount of time when students feel they have to constantly monitor their public image. And it heightens the distinctions between people who are going out often and people who aren’t, which can put pressure on students who think they’re not having the college experience they “should” be having.

Social media posts also exacerbate misperceptions—making students think that their peers are drinking more, hooking up more, and having more fun than they are. So that’s a negative. I’ve seen statistics that show that teenage girls use social media more than teenage boys; the boys are more likely to be gaming. Anecdotally, I’d guess that sororities are more likely to use social media to post selfies and pictures of events while the fraternities are using it more for private threads among brothers.

Do you think there will be as strong of a reaction to Fraternity as there was with Pledged? I worked as a Greek beat my freshman year, and even the most simple stories about fraternities led to about a dozen hate-emails and DMs from fraternity brothers. Have you prepared for possible backlash?

So far, so good. I think Greeks will be pleasantly surprised by this book, because it’s not the caricature that’s typical of media coverage of these groups—both the stories and the information for parents and students are balanced and written from the perspectives of fraternity brothers themselves. As a broader look at campus masculinity, the book might spark healthy debates and discussions, but I don’t consider that a bad thing.

In any case, I’ve received hate mail before—and there’s not much I can do to prepare for it other than to respect that everyone’s entitled to their opinions, and that sometimes these issues can be polarizing. But the book makes clear that I’m pro-students.

What lessons about masculinity do you hope boys and men should take from Fraternity?

The book is written for college and high school students, parents and general nonfiction readers, whether they like a good story or they want to understand more about masculinity today. It’s meant to have broad appeal so that it can be a tool to spark important discussions.

It’s crucial for everyone to understand the pressures, stereotypes and expectations that young men are dealing with in America right now. There are countless ways to be masculine, and an individual’s identity should not be wrapped up in how he or she fulfills a gender role. We need to let young men know that they should feel free to be who they are.

You can connect with Robbins on Twitter @AlexndraRobbins and learn more about her work at alexandrarobbins.com.

Austin Faulds is a student studying journalism at the Indiana University and a feminist-fueled filmmaker. Coffee, cats and punk rock are some of his favorite things. 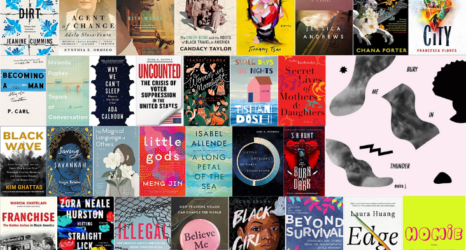 January 2020 Reads for the Rest of Us 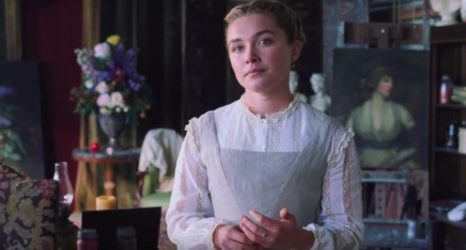 An Ode to Amy March