New regulations went into effect on June 14 in the UK banning advertisements that “include gender stereotypes that are likely to cause harm, or serious or widespread offense.”

The new mandate comes after a July 2017 report by the UK’s Advertising Standards Authority (ASA) shed light on the detrimental effects of gender stereotypes in advertisements. The report identified six categories of gender stereotypes that could be harmful, ranging from sexualization to gender role conformity, and declared that “ads that feature gender stereotypes have the potential to cause harm by contributing to unequal gender outcomes, although advertising is understood to be only one of many different factors that contribute.”

Public interest in such research by the ASA increased in 2015, when Protein World’s infamous “Are You Beach Body Ready?” ad appeared in the London tube. The ad was eventually classified as offensive and removed after upwards of 350 complaints were filed with the ASA. Standards at the time required that advertisements be “socially responsible,” but did not specifically ban or address gender stereotypes.

“Put simply, we found that some portrayals in ads can, over time, play a part in limiting people’s potential,” ASA Chief Executive Guy Parker explained in a statement. “It’s in the interests of women and men, our economy and society that advertisers steer clear of these outdated portrayals, and we’re pleased with how the industry has already begun to respond.”

After the 2017 report was released, the Committee of Advertising Practice (CAP), ASA’s sister organization, published an Advertising Code restricting how advertisers represent and compare genders in their content. Additional guidance detailing the type of content that will now be banned includes any ad “which implies an idealized, gender-stereotypical physical appearance” or shows “a man or a woman failing to achieve a task specifically because of their gender.”

“The evidence we published last year showed that harmful gender stereotypes in ads contribute to how people see themselves and their role in society,” Ella Smillie, CAP Project Lead and Regulatory Policy Executive, said in a statement. “They can hold some people back from fulfilling their potential, or from aspiring to certain jobs and industries, bringing costs for individuals and the economy.”

Companies were giving six months to adjust for compliance—and now, their time is up.

Sophie Dorf-Kamienny is a freshman at Tufts University. She was a Ms. editorial fellow and assistant editor of social media. You can find her on Twitter at @sophie_dk_. 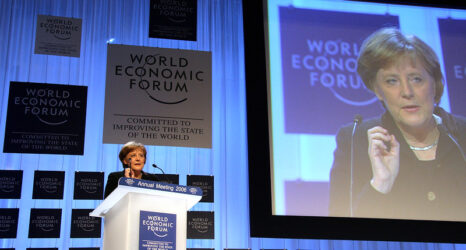 Angela Merkel Announces She’s a Feminist Before She Steps Down—Too Little, Too Late?

How One Woman Overcame Pandemics, War and Patriarchy to Build a Champagne Empire
Taliban Ban Girls From Returning to Secondary School: “Like Burying Them Alive”
Global Women’s Assembly for Climate Justice to Coincide with U.N. General Assembly: “Life Itself Hangs in the Balance”