According to Alice Paul, who heads N.A.W.S.A.’s Congressional Committee as well as her own Congressional Union for Woman Suffrage, not many more of these gatherings will have to be held, because victory is rapidly approaching.

She hopes to get the Susan B. Anthony Amendment, which would outlaw sex discrimination at polling places nationwide, passed by Congress this session, and urged the delegates to give their Senators and Representatives no peace until it has been passed by two-thirds of both Houses of Congress and sent to the States for ratification by three-fourths.

Reverend Anna Howard Shaw, president of N.A.W.S.A. since 1904, presided at the convention’s afternoon session, and proclaimed that patience was no longer a virtue. Women are no longer humbly begging for the ballot, they are demanding it. She also noted: “Some of us believe that the Constitution originally gave women the right to vote, but by some twist of interpretation it has been denied us. The twist, however, is not in the Constitution, but in the minds of the twisters.”

Delegate Pattie Ruffner Jacobs of Alabama, reformer and anti-child-labor activist, became involved in the suffrage movement three years ago after a speech by Jane Addams convinced her that only with the ballot could women win any of their battles for reform. Jacobs assured her fellow delegates that contrary to rumor, the suffrage movement is quite lively in the South, and that Southern women resent the assumption that they are anti-suffrage:

“There are thousands of us. The women of Virginia, Louisiana, of Tennessee, Kentucky, of the Carolinas, in fact all of the Southern States, are stirring, realizing that the vote is the only dignified and sure means of obtaining recognition of their aspirations and of their needs.”

The convention’s evening session was a lively celebration hosted by delegates from places where women had recently won suffrage. The latest victories were this year in Illinois, where women won the right to vote for President and local offices (though not yet Statewide offices), and the winning of full suffrage in the Territory of Alaska. Delegates from States where full-suffrage referenda had been successful (Washington State in 1910, California in 1911, plus Oregon, Arizona and Kansas last year) also helped put on a great party, which served as a reminder of the quickening pace of victories, since there had been none to celebrate between winning Idaho in 1896 and Washington in 1910. 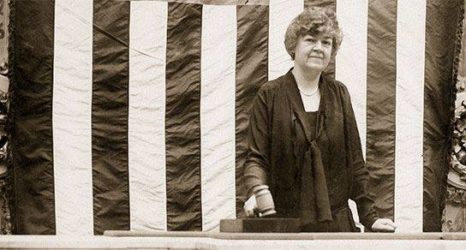 Today in Feminist History: A Chance for Women to Serve Their Country in Uniform (December 30, 1941)

An Attack on Women in Congress Is an Attack on All of Us
A “Prisoner of War” Story: The Life and Captivity of Lisa Montgomery—The First Woman To Be Executed by the Federal Government in 68 Years
January 2021 Reads for the Rest of Us