Injecting Bleach Is Not An Elixir For What Ails The United States - Ms. Magazine
Skip to content

Late last week, at a press briefing, President Donald Trump urged senior health officials to consider ways in which ultraviolet light in extremely high doses or household disinfectants might be used or injected into humans in order to stave off, treat, or possibly cure COVID-19 related illnesses.

The president called for doctors to consider “hit[ting] the body with a tremendous … ultraviolet or just very powerful light.” He conjectured bringing high doses of ultraviolet light in the body into the body—through the skin or otherwise—should be explored.

Trump then surmised that because disinfectant “knocks it out in a minute,” that it would be worth determining whether household sanitizers can be administered, presumably in Americans, “by injection inside” their bodies.

Such perplexing, and ill-informed statements, stand in stark contrast to the measured statements and leadership offered in nations like Germany, New Zealand, Australia and elsewhere—where senior medical officials and epidemiologists have guided political response to the novel coronavirus.

Predictably, within hours, companies that produce household chemicals issued warmings, reminding the public that disinfectants are not consumable.  Indeed, they are poisonous, and imbibing bleach or other household disinfectants can lead to serious illness and even death.  Simply put: Bleach and other disinfectants should not be swallowed, sniffed or injected in anyway.

Even before the president’s press conference, some poison center hotlines were observing increases in reports. Some of the calls could be related to people making their own disinfectants (more children at home during the day, thus with greater access to harmful household poisons), or people mixing chemicals.

Nevertheless, over the weekend, news outlets reported uptick in calls to poison control after the president’s comments.  For example, the Kentucky Poison Control Center reported a “spike” in calls related to sanitizer ingestion.  New York City health officials also reported a “higher-than-normal number of calls the day after President Trump speculated that that injecting household disinfectants could be a coronavirus treatment.”

On reflection, the briefing was stunning—not only for what the president conjectured to senior medical officials and media in attendance, but also for what it reveals about another crisis in the United States, namely a crisis in education in America.  As comedians spoofed and memes mocked the president, the real tragedy resided not simply in his bizarre conjectures, but in a devaluing of education and science.

The U.S.’s scornful turn toward anti-intellectualism and critical thinking became more glaringly apparent during the Obama administration.  Americans disparaged Michele Obama for creating a garden at the White House and encouraging more vegetables in the school lunch program through the 2010 Healthy Hunger-Free Kids Act (HHFKA).

Meanwhile, childhood obesity is staggering in the U.S.  According to the Centers for Disease Control and Prevention (CDC) over 20 percent of American children 11 years old and above are obese.  It’s estimated that the costs associated with childhood obesity is roughly $14 billion.

However, this crisis is not simply about gardens, poor food choices for children, the severe health consequences and the devastating economic toll of mismanaging children’s health. In many ways, it is what leads the U.S. to this moment in its history—where in the midst of a pandemic, scientists and health officials are side-lined or regarded as props, while politicians and their close allies and family members take center stage to pontificate on this deadly virus.

After all, Trump’s misstep comes only weeks after Jared Kushner, his son-in-law, warned that personal protective equipment (PPE) paid for by the federal government would not go to states, but rather be preserved for the “federal.”

The bigger betrayal to our nation is the continued profiting off of and exploitation of uneducated Americans and political pandering in such ways that lacking a robust K-12 education or fundamental critical thinking skills are badges of honor.  (To be clear, one need not attend college to be well-versed or possess critical thinking.)

In this vein, “birther” claims have been supplanted by “flat earther” assertions.  That is, challenges to basic science—such as contemporary popular claims that Earth is a flat planet—are not signs of innovation and nuance, but rather failures in education.  During John F. Kennedy’s administration, such thinking would never have guided a national space program, or landed anyone on another continent—let alone the moon.

In the present, to know varieties of greens, such as arugula, implies being out of touch and elitist rather than curious about what grows from the earth.  In 2014, the media contributed to this, deriding Barack Obama for declaring the price of that spicy green was excessive.  President Obama was seen as “out of touch” with the American people.  If only the problems of a U.S. president centered on his appreciation for nutritious greens.

During the Obama administration, anti-intellectualism intensified—motivated likely by racism.  No one could mistake either Michelle or Barack Obama as trust-fund beneficiaries.  According to news accounts, they were paying off their college and law school loans as he campaigned for the White House. Neither received the economic boost that marked the legacies of presidents like Trump, Kennedy, Carter, Bush or others.  Neither grew up with second homes or with childhoods marked by luxurious family vacations.

How ironic then, that they could be framed as being out-of-touch and elitist.

What is clear is that the crisis in U.S. education can be deadly—whether taking seriously a president’s call to consider ingesting disinfectants or attempting to prove the earth is flat.

On average, 64 percent of American 8th graders read below grade level; that means barely 35 percent are at grade level.  Various studies show that teenagers in the U.S. continue to fall behind their peers in Europe, Asia and elsewhere in math, science and reading.  Study results from the Program for International Student Assessment, known as PISA, show the glaring gap.

Experts who study this, say the U.S. is losing ground and the results are worrying.  This in part could be blamed on an education system rooted in disparities and lacking a commitment to broad inclusion. A comparison to how the U.S. grows its prisons and jails while failing its schools offers important insights.

Importantly, the crisis is not confined to the unequal conditions of U.S. K-12 schools—though that remains an urgent concern.  Rather, it is a crisis in values where being incurious is rewarded as being true American. 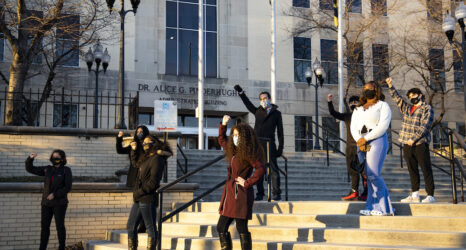 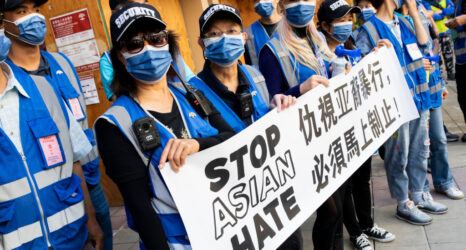 Will My Period Tracking App Betray Me? Menstrual Surveillance in a Post-Roe World
Weekend Reading on Women’s Representation: Celebrating AAPI Women Leaders; Lisa Cook Is First Black Woman on Federal Reserve Board
U.S. Culture Is So Deeply Patriarchal, We Can’t Even Admit Overturning Roe Is About Women