June 27, 1917: The first jail sentences imposed on some of the “Silent Sentinel” suffragists picketing President Wilson were handed down today in Washington, D.C.’s Police Court.

Following a three-hour trial on false charges of “obstructing traffic” on the wide Pennsylvania Avenue sidewalk, the picketers were each given a choice of paying a $25 fine or spending three days in prison.

All six chose prison, and to be taken there in a police van.

The judge might have preferred to impose longer terms, but the fact that all the prisoners made it known that they would go on a hunger strike if given lengthy sentences made the penalty more a consideration of politics and public relations than sympathy or mercy when Judge Mullowney handed down the terms for these first-time offenders. What he will do with “repeat offenders” is the subject of much speculation this evening.

The first two arrests were made on the June 22, when Lucy Burns and Katharine Morey were carrying a large banner using a quote from President Wilson’s War Message in April, when he praised democracy and “the right of those who submit to authority to have a voice in their own Government.” On June 23rd, four were arrested, two in front of the House of Representatives, and two outside the White House gates. The day before yesterday there were twelve arrests, and yesterday nine more, all on Pennsylvania Avenue, outside the White House fence.

Tonight the six convicted women are in separate cells in the District Jail, following a suffrage meeting and “song service” with other inmates. The prisoners are:

The picketing of the White House began on January 10, the morning after an unsatisfactory meeting with the President by a delegation of 300 suffragists. They had been invited to the White House the day before to deliver a memorial regarding Inez Milholland Boissevain—a 30-year-old suffragist who had collapsed on stage—then died while on a speaking tour of the West last fall. During the visit, it seemed only appropriate to ask the President to support the cause for which she had given her life.

Though Wilson was known to be a supporter of the principle of woman suffrage—and even voted in favor of it in the New Jersey suffrage referendum of 1915—he refused to endorse the Susan B. Anthony Amendment to the U.S. Constitution, or help get it through a Congress controlled by his own Democratic Party.

He gave as his excuse that he was merely a servant of his party, and since Democrats had thus far endorsed winning suffrage only on a State-by-State basis, and not by Federal amendment, he was powerless to do anything. He then told suffragists to go out and work harder.

This display of political cowardice by the President understandably angered the suffrage delegation. Having just been re-elected to a second, and traditionally final term, he had the freedom that comes with holding great power without ever having to face the voters again. His dismissive attitude, plus his ridiculous excuse for inaction were insults to the dignity and intelligence of his visitors, and when combined with the hypocrisy of his constant pleas for democracy worldwide and silence about the lack of it in his own country for tens of millions of voteless women, a firestorm of anger spontaneously erupted.

After leaving the White House, the President’s visitors called an “indignation meeting” for that evening, and those who attended decided to take the unprecedented step of picketing a President. The banner-bearing “Silent Sentinels” began their daily vigils in bitter cold temperatures and blowing snow, and have continued to take up their posts along the White House fence through drenching rains, blistering heat, oppressive humidity, assaults by hostile mobs, opposition from more conservative suffrage groups, arrests, and now prison sentences.

But it was made totally clear by everyone at National Woman’s Party headquarters today that regardless of how many more unjustified arrests are made, or how long any future sentences may be, picketing will continue until President Wilson endorses the Anthony Amendment and works to bring democracy to the women of America with the same zeal that he has shown for bringing it to the citizens of other nations. 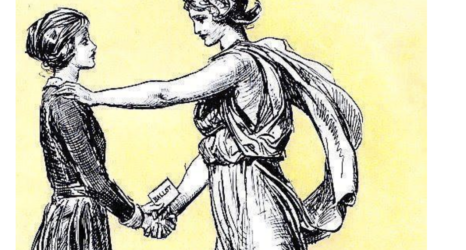