“Health care should be a basic resource that people can access in their communities without fear of stigma or criminalization. For too many people, including for immigrants, because of the over politicization of health care, this is not the case.

Immigrants have always been and will always be integral and valued members of our communities. The health care immigrants have access to should reflect that. This includes access to comprehensive reproductive health care as everyone should be able to make supported decisions about their bodies, their families, and their futures. … The HEAL Act would remove xenophobic, politically motivated barriers that prevent immigrant communities from accessing health services.”

—Dr. Jamila Perritt, president and CEO of Physicians for Reproductive Health, in response to the reintroduction of the HEAL for Immigrant Families Act in the House and Senate on Wednesday, May 12. The act ensures critical access to Medicaid and the Children’s Health Insurance Program (CHIP) by lifting the current five-year period that lawfully present immigrants—including kids—are required to wait before being able to enroll in these health care programs

Marco Rubio claims it’s pointless to pass gun laws because criminals are “not going to follow the law.” Here’s what @val_demings says to lawmakers who are unwilling to take on gun violence. pic.twitter.com/hZx3WYCtJo

“Bringing the birth control pill over-the-counter would enable more people to use the pill consistently and correctly, thereby helping to prevent unintended pregnancies in the US and allowing young people the ability to live their lives on their own terms. … Young people are tired of jumping through hoops to access the contraception they need, and the science shows that the pill is safe and effective and current barriers point to the need to move it over-the-counter.”

—A letter from young Americans urging President Biden to #FreeThePill, making it “available over-the-counter, covered by insurance, and free of age restrictions.”

“There is no doubt: Schools must be open. In person. Five days a week. … The United States will not be fully back until we are fully back in school. And my union is all in.”

—Randi Weingarten, president of the American Federation of Teachers, on the reopening of schools nationwide following the COVID-19 pandemic.

“Wilder was a young journalist, unnecessarily harmed by the AP’s handling and announcement of its firing of her. We need to know that the AP would stand behind and provide resources to journalists who are the subject of smear campaigns and online harassment.

As journalists who cover contentious subjects, we are often the target of people unhappy with scrutiny. What happens when they orchestrate a smear campaign targeting another one of us? Interest groups are celebrating their victory and turning their sights on more AP journalists. They have routinely made journalists’ identities subject to attack. Once we decide to play this game on the terms of those acting in bad faith, we can’t win.”

—An open letter from employees of the Associated Press after young reporter Emily Wilder was fired for advocating on behalf of Palestinians during her college years.

My statement on my termination from The Associated Press. pic.twitter.com/kf4NCkDJXx

“Make no mistake: Voter suppression is a public health issue. Every aspect of our health is affected by the environment around us, and voting is a powerful tool allowing people to impact their environments, protect their rights, ensure the dignity of their communities, and control their bodies. S.B. 202 profoundly harms the health of Georgians by allowing state governments to usurp the power of county election boards, adding new voter ID requirements for absentee ballots, permanently reducing access to ballot drop boxes, and criminalizing the provision of food and water to voters standing in long lines.

—A letter on behalf of physicians across the country to Georgia governor Brian Kemp, condemning the passage of S.B. 202, a discriminatory law that restricts voting rights.

+ Maya Angelou and Sally Ride—the first woman sent to space—will appear on the back of U.S. quarters within the next four years, according to the U.S. Mint.

+ “On Monday, May 17, the U.S. Supreme Court agreed to hear an appeal in the case of Dobbs v. Jackson Women’s Health Organization. The case involves a Mississippi law banning most abortions after 15 weeks. The court will consider the question as to whether all previability prohibitions on abortion are unconstitutional.

“The case is a direct challenge to the court’s precedents in Roe v. Wade and Casey v. Planned Parenthood ruling states cannot ban abortion before viability. This is the first time the court will rule on the constitutionality of a pre-viability abortion ban since Roe,” Carrie Baker reports for Ms.

Someone once said when climate change comes up, Republicans say “I’m not a scientist.” But when a woman’s health issue is being discussed, they’re all gynecologists. https://t.co/FuZNoQzNIK

+ Sally Buzbee was appointed the new executive editor of The Washington Post, becoming the first woman to run the publication. She previously held the same position at the Associated Press.

+ On Friday, May 14, the House passed the Pregnant Workers Fairness Act (PWFA), a crucial piece of legislation designed to guarantee workplace protections for pregnant people. If signed into law, it would require employers to issue reasonable accommodations for pregnant employees.

“We cannot let the former president drag us backward and make us complicit in his efforts to unravel our democracy,” Cheney said. “Down that path lies our destruction, and potentially the destruction of our country.”

“It’s truly a dangerous, dangerous sign of our times that the price of admission in today’s Republican Party is silence in the face of provable lies.” pic.twitter.com/0wZ8upVkVR

+ Newly-elected Rev. Megan Rohrer, 41, will be the first openly transgender Christian bishop in the U.S., serving the Evangelical Lutheran Church. Their domain will include nearly 200 congregations in California and Nevada.

+ Since early May, when tensions escalated to intense violence between Israeli and Palestinian forces, the number of antisemitic attacks in the U.S. rose steeply. “The Anti-Defamation League said that in the week after the fighting erupted, it received 193 reports of possible anti-Semitic violence, up from 131 a week earlier,” reports NPR. “On Twitter, the group said, it found more than 17,000 tweets using variations of the phrase ‘Hitler was right’ between May 7 and 14.”

Feeling totally overwhelmed by everyone’s good wishes on my election as the MSP for Glasgow Kelvin, my home and a vibrant community that I care deeply about. I can’t wait to get started supporting our recovery from the pandemic and securing Scotland’s right to choose its future. pic.twitter.com/HjWQewv2zQ

+ On Monday, May 10, “a citizen’s arrest law once used to justify lynchings after the Civil War” was repealed by Georgia governor Brian Kemp (R). It gained national attention, over 150 years after its passage, because a prosecutor employed it as a defense of Ahmaud Arbery’s killers.

+ A court order on Monday, May 17 cleared the way for Fiame Naomi Mata’afa to become Samoa’s first woman prime minister, replacing the island’s current leader of 22 years. But the day of her swearing-in ceremony, Mata’afa found that she had been locked out of the room, forcing her to take the oath from a tent her followers pitched on the statehouse lawn.

“This is an illegal takeover of government,” Mata’afa said. “Because it’s a bloodless coup, people aren’t so concerned or disturbed by it.”

+ Singer Demi Lovato came out as non-binary via a Twitter thread on Wednesday, May 19. “I’m doing this for those out there that haven’t been able to share who they truly are with their loved ones,” Lovato wrote in their announcement.

Every day we wake up, we are given another opportunity & chance to be who we want & wish to be. I’ve spent the majority of my life growing in front of all of you… you’ve seen the good, the bad, & everything in between. pic.twitter.com/HSBcfmNruo

+ Dr. Jewel Bronaugh was confirmed as the first Black woman to be deputy secretary of agriculture on Thursday, May 13, having previously served as commissioner of the Virginia Department of Agriculture and Consumer Services.

+ Although states largely paused executions for the duration of the COVID-19 pandemic, Texas held its first execution in 10 months on Wednesday, May 19. Quintin Jones was lethally injected without any media witnesses present. “The agency blamed a ‘miscommunication between officials’ for shutting out reporters and apologized for the ‘critical error’ and vowed to investigate how it happened,” NBC reported.

“Love all my friends and all the friendships that I have made. They are like the sky,” said Jones, 41, in his final statement. “It is all part of life, like a big full plate of food for the soul. I hope I left everyone a plate of food full of happy memories, happiness and no sadness.”

The NY Liberty would like to thank Layshia for their incredible contributions to our organization both on & off the court. Layshia’s courage & activism inspires all of us. We wish you the best & look forward to witnessing your continued impact on this league, and in this world. pic.twitter.com/cIlOUm3Fsn

+ British Black Lives Matter activist Sasha Johnson, 27, was shot in the head on Sunday, May 23 after receiving numerous death threats and remains in critical condition. Britain’s Taking the Initiative party described Johnson as a “strong, powerful voice” who was “actively fighting for black people and the injustices that surround the black community.”

+ Biden announced Catherine Lhamon will be his nominee for assistant secretary for civil rights policies at the Department of Education. Lhamon, who previously held the same position in the Obama administration, is known for strictly enforcing Title IX in federally funded colleges.

+ The “she-cession” spurred by the COVID-19 pandemic is well documented, but even for women and mothers who remain in the workforce, working from home poses disproportionate challenges. While the vast majority of fathers—71 percent—said it “boosted well-being,” the number is only 41 percent for mothers. “What we found was mothers are now doing a double-double shift,” said report author Alexis Krivkovich of the domestic responsibilities mothers are expected to juggle when working from home.

+ Sixty to 70 percent of Americans oppose the overturning of Roe v. Wade, and support preserving abortion access. When broken down by demographics, six percent more women than men think abortion should be legal in most cases, and higher levels of education correlated with a positive stance on abortion access.

+ “42% of LGBTQ youth seriously considered attempting suicide in the past year, including more than half of transgender and nonbinary youth,” revealed a report by the Trevor Project. 94 percent of respondents agreed that “recent politics negatively impacted their mental health,” and youth of color struggled disproportionately. 12 percent of white youth attempted suicide, as compared to 31 percent of Indigenous youth and 21 percent of Black youth.

Only 30% of U.S. Catholics believe that #SCOTUS should overturn Roe V. Wade.

+ Women continue to struggle with disproportionately high rates of poverty and unemployment. Two million women are yet to return to the U.S. workforce since a record high of 2.8 million left in April 2020, and 165,000 left in April 2021.

+ Within a year of the first COVID-19 lockdowns in the U.S., 6,600 hate incidents against the AAPI community were reported, with women 2.2 times more likely to be targeted than AAPI men.

+ A Plastic Waste Makers index reveals 20 companies are at the center of the global climate crisis, producing more than half—55 percent—of the world’s plastic waste. ExxonMobil is the greatest polluter of any firm, but Australia generates the most plastic waste per capita, at 59 kg per person, compared to 53 kg per person in the U.S..

Sophie Dorf-Kamienny is an incoming freshman at Tufts University. She is a former Ms. research and editorial fellow, and assistant editor of social media. You can find her on Twitter at @sophie_dk_. 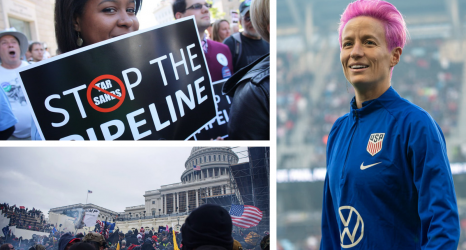