Studies suggest the number of Asian American women who have experienced sexual violence could be as high as 55 percent.

The U.S, marked a somber commemoration last month: the six-month anniversary of the Atlanta spa shootings.

The murders of eight people, including six Asian American women, prompted a national conversation about anti-Asian hate fueled by the COVID-19 pandemic. But many people failed to discuss the root cause of this massacre and similar acts of violence—the deadly intersection of anti-Asian racism and misogyny.

As we recognize Domestic Violence Awareness Month, we must do more to stop the verbal, emotional and physical violence against Asian American and Pacific Islander women—at work, on the street, even in our own homes.

AAPI women have been forced to live with stereotypes that take away our humanity and reduce us to sexual objects. We can trace these stereotypes as far back as 1875, when the Page Act, the U.S.’s first immigration law, banned Chinese women from entering the country on the grounds of sexual deviance. Decades later, wars in Japan, Korea and Vietnam reinforced this stereotype to the point where depictions of Asian women as temptresses or sexual servants took root in American popular culture.

When we are overrepresented in ways that dehumanize us, it’s no coincidence AAPI women experience high rates of harassment and violence. In 2020, AAPI women reported nearly 70 percent of all anti-Asian hate crimes. A 2010 survey also found one in five AAPI women had experienced intimate partner violence.

But these statistics are almost certainly lower than what’s actually happening to us. The reality is AAPI women underreport experiences of domestic violence and studies suggest the number of Asian American women who have experienced sexual violence could be as high as 55 percent.

When AAPI women do report violence, or try to, they often struggle to find the support they need. Many reporting hotlines don’t have the language or cultural capacity to help and intervention strategies rooted in Western notions of family structures can also alienate or push women away.

Racism and misogyny, violence with nowhere to turn; these problems are too entrenched to eradicate all at once. But we can take important steps to empower all survivors of domestic violence.

First, we must make support accessible to the women who need it most. Organizations serving survivors should receive enough resources to provide linguistically and culturally competent care, including hiring front line staff from the communities they serve. We also shouldn’t overlook the critical work already happening by organizations who primarily serve AAPI women, such as Apna Ghar and Kan Win in my home state of Illinois.

Second, we must recognize that violence perpetrated against Asian American women is not just because of anti-Asian racism. It is a form of violence rooted in misogyny and we will not weed it out unless we change the way we talk about it.

Violence perpetrated against Asian American women is not just because of anti-Asian racism. It is a form of violence rooted in misogyny.

At the same time, we must recognize this violence is not incidental. It is systemic—and addressing it requires collective action on every level. Through an executive order, for instance, President Biden could create an interagency task force to address the dangerous stereotypes that reinforce and lead to every form of harassment and abuse AAPI women and girls face. With culturally empowered programs, stronger community resources and coordinated efforts to promote our civil rights, we will address anti-Asian misogyny at its source—and embark on the long road to defeat it.

The Atlanta spa shootings proved what Asian American women have always known. Stereotypes against us don’t just poison humanity: They put our lives at stake.

Sung Yeon Choimorrow is the executive director of the National Asian Pacific American Women’s Forum, the nation’s only organization dedicated to building power with Asian American Pacific Islander women and girls. She is an Ordained Minister in the Presbyterian Church. You can follow her @schoimorrow. 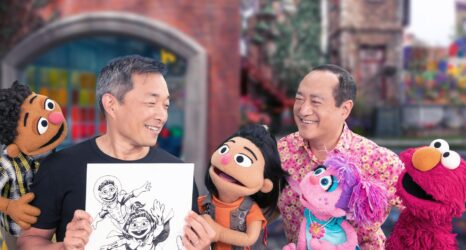 Daughters of Immigrants Lead the Way