Keeping Score: 'The Dominoes Have Started to Fall, and They Won't Just Stop at One' - Ms. Magazine
Skip to content

“The dominoes have started to fall, and they won’t just stop at one. People should see the connection between reproductive rights, LGBTQ rights, women’s rights, interracial marriage—these things are all connected legally.”

—Michigan attorney general Dana Nessel on the significance of overturning Roe v. Wade when it comes to LGBTQ+ rights and landmark Supreme Court cases such as Obergefell v. Hodges.

“As the chief executive officer of a major firearms manufacturer that sells millions of assault weapons, your testimony is crucial to understand why your company continues to sell and market these weapons to civilians, what steps your company plans to take to protect the public and what additional reforms are needed to prevent further deaths from your products.”

“Republicans have ripped away every woman’s right to decide whether or not to keep a pregnancy, and now some Republican lawmakers want to hold women captive in their own states by punishing them for exercising their constitutional right to travel within our country to get the care they need. Restricting women’s right to travel across state lines is truly radical—and un-American.“

I’m headed to the Senate floor with @SenCortezMasto to call for a vote on our bill to protect every American’s right to travel across state lines—including to get or provide a lawful abortion.

This shouldn’t be controversial. https://t.co/r2rL9NFLkh

“Today, Republicans blocked vital legislation to protect women seeking critical healthcare. By objecting to my legislation, they’re allowing state legislators to reach across state lines to control not just what happens in their states, but what happens in every state across this country and to punish women for exercising their fundamental rights. It’s absolutely outrageous. I won’t stop fighting for women’s freedom.”

—Sen. Cortez Masto in a statement after their bill was blocked in the Senate Committee on Health, Education, Labor, and Pensions (HELP) by Sen. James Lankford (R-Okla.).

“This administration has a hard time following the law, and now they are trying to have their appointed bureaucrats mandate that hospitals and emergency medicine physicians perform abortions. I will ensure that President Biden will be forced to comply with the Supreme Court’s important decision concerning abortion and I will not allow him to undermine and distort existing laws to fit his administration’s unlawful agenda.”

—Texas Attorney General Ken Paxton announcing a lawsuit against President Joe Biden’s Department of Health and Human Services. Biden had previously released HHS guidance to follow the Emergency Medical Treatment and Labor Act, which requires that patients are able to receive all necessary “stabilizing treatment” when one’s life is at risk.

“As their dad, I have no control over their adult bodies. As their sheriff, it is absolutely none of my business. I will not persecute Texas women or anyone else pursuing those same rights. … Shame on the supreme court and the bureaucrats in Washington DC and Austin who are attempting to impose their own supposed morals on others. They will not use my badge or the color of my office to do so. My job is chasing predators, rapists, and human traffickers, not someone exercising a right.”

—Father and county sheriff Javier Salazar of Bexar, Texas, posted to Facebook that he does not intent to pursue residents who choose to receive abortion care.

+ On Tuesday, July 19, the House voted 267–157 to pass the Respect for Marriage Act, a bill which would protect same-sex marriage and ensure that a marriage is federally recognized so long as it was legal at the state level. Rep. Jerry Nadler (D-N.Y.) introduced the bill, and 47 Republican representatives voted to pass it, though its future in the Senate is uncertain.

The future of the contraception access bill is not yet clear, but Sen. Lisa Murkowski (R-Alaska) has said she would like to see contraception rights protected under federal law.

+ A statue of civil rights activist and educator Mary McLeod Bethune is the first state-commissioned statue of a Black person in the U.S. Capitol’s Statuary Hall. Bethune’s statue replaced that of a Confederate general, and is inscribed with the quote, “Invest in the human soul. Who knows? It might be a diamond in the rough.”

+ A law signed by Arizona Governor Doug Ducey on July 6 will restrict one’s right to record police officers in public spaces as of Sept. 24, requiring that civilians move eight feet away or face fines and arrest. However, legal scholars are confident the measure will face lawsuits for violating the First Amendment.

+ UCSF professor Dr. Meg Autry recently announced their plan to provide abortion services on a ship in the Gulf of Mexico, as it is often closer and cheaper to board a boat than to drive or fly to another state. The initiative—called PRROWESS—would especially benefit pregnant people in Texas, Alabama, Louisiana and Mississippi.

+ The Biden administration cautioned U.S. pharmacists that failing to dispense abortion-related pills is a form of discrimination on the basis of sex or disability, since such medications are often used to treat miscarriage, and ulcers, among other conditions.

+ After Biden agreed to appoint Chad Meredith—an anti-abortion Kentucky lawyer tapped by Sen. Mitch McConnell (R-Ky.)—to a federal court seat, plans fell through due to an objection by Sen. Rand Paul (R-Ky.). Prior to Paul’s veto, McConnell described Biden’s cooperation as a “personal friendship gesture,” with Biden expecting nothing in return.

+ This year, 144 women cyclists are participating in the Tour de France for the first time since 1989. After the women’s tour was canceled for 33 years due to a lack of financial support, cycling app Zwift stepped up to fund the event with prizes worth 250,000 euros.

“For the women to take the stage, to be elevated through that platform that they deserve, is really the key to unlocking so much more audience, investment and growth in the sport at all levels,” Zwift director of women’s strategy Kate Veronneau said. “For little girls growing up and seeing themselves in a variety of sports … that’s powerful.”

+ According to data from the Bureau of Labor Statistics, out of 372,000 new jobs in June, 82.8 percent were held by women. Despite job growth, women still hold 395,000 fewer net jobs than they did pre-pandemic. The National Women’s Law Center found that overall, the work force consisted of 826,000 fewer women in June 2022 than it did in February 2020.

+ The BA.5 COVID-19 variant is driving a new wave of both infection and reinfection, resulting in a daily average of over 100,000 reported new cases in the U.S., though experts estimate true levels may be closer to one million.

“I understand the pandemic fatigue, but the virus is not done with us.I fear that the current human behavior is leading to more people getting infected and acquiring long covid. I fear that this situation can lead to a large number of people with disability and chronic health problems in the future,” immunology professor and long COVID expert Akiko Iwasaki said.

+ COVID-19 surges are disproportionately impacting nursing home residents, who are at higher risk of illness and death. In June, 27 percent more residents tested positive for COVID than in May.

+ An analysis of media coverage by Media Matters for America found that 77 percent of articles related to the overturn of Roe v. Wade omitted Americans’ majority support of legalized abortion care. Seventy-two percent “failed to acknowledge the disproportionate impact of the reversal of Roe on certain populations.” Sixty-nine percent failed to mention that Roe‘s overturn could put same-sex marriage, contraception and other privacy-based rights on the line.

Sophie Dorf-Kamienny is a rising sophomore at Tufts University studying sociology and community health. She is a Ms. contributing writer, and was formerly an editorial fellow, research fellow and assistant editor of social media. You can find her on Twitter at @sophie_dk_. 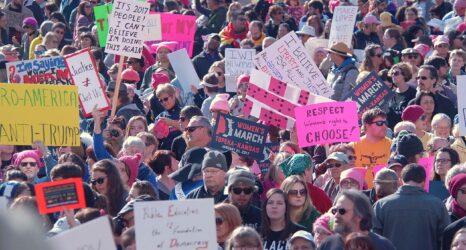