Inspired by the massive Women’s Marches, encouraged by feminist organizations and energized by passionate volunteers, record numbers of women candidates—many of them first-timers—stepped forward to run for office in the midterm elections. And many of them won.

The latest issue of Ms., the feminist magazine co-founded by Gloria Steinem in 1972, celebrates their victories. The magazine’s Winter 2019 Special Election Issue, on newsstands this month, profiles the feminists nationwide who won seats in Congress and state offices in the midterm elections.

The 90 feminists now serving in the House alongside Speaker Nancy Pelosi are featured on its cover—which has now been shared thousands of times on social media, including by celebrities like Reese Witherspoon and Tracee Ellis-Ross. 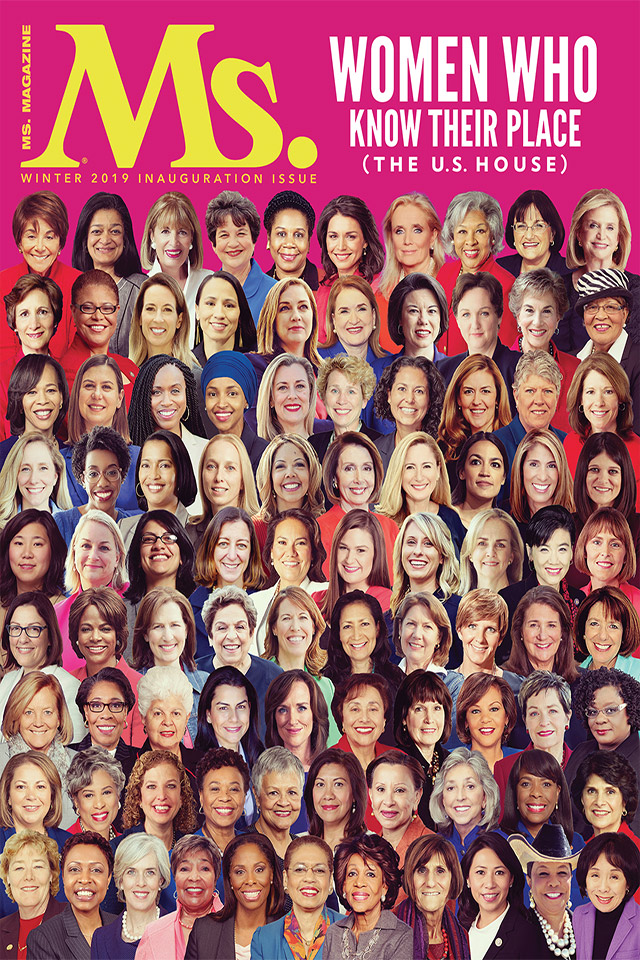 Victories by feminist women candidates shifted the balance of power in the House this year, accounting for more than 60 percent of Democrats’ gains in November. Historic breakthroughs define the newest incoming class of women, which includes the youngest women to ever serve in Congress, the first Native American and Muslim women to be sworn into Congress, the first black congresswomen from New England states and the first Latinas to ever represent Texas in Congress.

Among the ranks of the new women taking their place in Washington, D.C., are social workers, teachers, military officers and veterans, judges, lawyers and refugees. A pediatrician will be the only woman among 16 doctors in Congress. There are experts on the homeless crisis, early childhood education and human trafficking and a mother who lost her teenage son to gun violence.

“The presence of more women in Congress will have important impacts on policy debates, given their different backgrounds and varied life experiences,” Ms. executive editor Katherine Spillar writes in the new issue. “They will bring much-needed perspectives and ideas to the ensuing battles over health care, reproductive rights, gun reform, immigration, the environment, voting rights, sexual harassment and assault, LGBTQ rights, military spending and foreign policy—and to the fight for women’s equality.”

Spillar’s prediction proves the point made by the latest cover of Ms.: Women seeking political office in the wake of the 2016 election know their place now more than ever—in the halls of power.