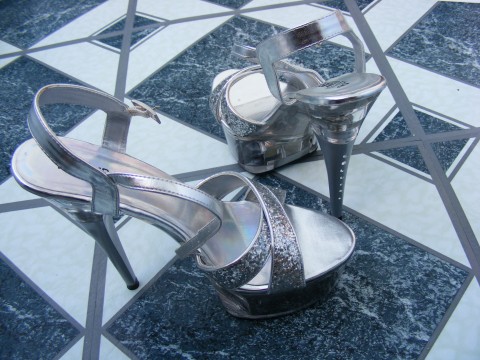 An insistent whirring sound drew me out of anesthesia and into the barbaric light of the operating room. While I had been asleep for a “minute or two”–as is protocol for day surgery in order to get patients home sooner–I was now awake and aware, though in no pain as my foot was numbed. I closed my eyes instinctively against the glare, but I could not shut off the sound, something eerily dental and unceasing: a Sagittal saw cutting off the protuberance of bone on the outside of my foot, alongside my big toe, that extended my left foot into what Edith Wharton might call a granite outcropping.

The surgeon removed the bone fragment, flushed the area with saline, then suctioned any remaining bone fragments from inside the skin that had stretched like a painter’s canvas to accommodate my former bunion. In order to get to the bunion, the surgeon had to cut open my big toe in one vertical swath, and in order to correct the hammer toe next to it  she had to do the same. My toes had parallel cuts running their length with stitches binding the flesh together. A horror show.

How did I get here? Once I was the girl with the smallest feet in the class, the one who scooped up all the leftover size 4s at the department store, the one who had her pick of trendy children’s shoes or dainty women’s selections. No more. Three pregnancies flattened my feet out to a size 7.

How many of your Austin Bunionectomy patients are women? I asked the surgeon injecting me with Cortisone and stitching the skin of my toes back together.

Ninety-five percent, she said. I gasped, having been under the false assumption that the bunion was an equal-opportunity problem. But, in fact, while bunions occur in about 30 percent of the population of most Western countries, they are seen most commonly in women.

The reason? Heredity. And shoes.

Men who suffer from bunions do so mainly because of heredity, but it is a combination of heredity and bad shoes that make it better than a 50/50 risk for women. Nearly 90 percent  of women in the U.S. wear shoes that are too small, and 55 percent have bunions. Reports Krames Patient Education in one of those glossy brochures that line the walls of podiatrist’s offices,

Squeezing a square-shaped foot into a shoe with a pointed toe increases the risk of a painful bunion.

What makes men sexy does not hurt them. But women seem to be influenced by people like Victor Chu, a former shoe designer, who says,

Unsexy shoes are anything under 2.75 inches … a 2-inch heel is a little dowdy. Too classical.

Chu trains women to “walk properly and painlessly in high heels and who co-produced the 28-minute video Legworks that teaches women to limber up, strengthen and stretch in order to squeeze into and walk seductively in heels.  In 2006, gyms in New York City offered “Stiletto Strength Classes,” and Stiletto sprint footraces were run in Australia and New York in recent years. WTF, women?

Eight days post-op, I am home with my foot raised above my heart so I don’t get a blood clot or swell into Sasquatch. Every eight hours I pop an Ibuprophen 800, and a Percocet when needed. There is no shoe my foot could fit into right now. It is bandaged and gauzed and booted to the size of a newborn baby. Nothing pretty, dainty or sexy here.

This is a moment for self-reflection, frankly: a coming-to-Jesus moment.

Look at the science: One 2009 study of 3378 women and men, average age 66, found that more than 60 percent of the women wore high heels, pumps and sandals in their past and suffered pain in their wake. Fewer than 2 percent of the men wore bad shoes.

Podiatrists make a living from people who hurt themselves for fashion–they can grind down their bones, “release” tendons to straighten hammer toes and place rods into toes that are unwilling to be straightened without force. Sometimes these rods are dissolvable, but when they are not, they are removed several weeks later, requiring more injections and more healing time.

I have crutches now. I have pain killers. I cannot get up except for the basic necessities. I will be somewhat immobilized for much of winter. And it’s all because I believed what I was told: that high heels enhanced my physical appearance, that I would be more attractive if my feet were positioned at impossible angles into miniature shoes. And still I persisted, even after reading Lisa See’s Snow Flower and the Secret Fan with its unsparing description of foot binding in literature.

Thankfully, I have also read Fara Warner’s The Power of the Purse: How Smart Businesses Are Adapting to the World’s Most Important Consumers–Women. Women who use their buying power wisely can change the way companies do business, she writes.

So let’s purchase our way to healthy feet. Let’s buy shoes from companies that promote healthy feet rather than heels that will draw catcalls. Eschew Choo. Sexy is socially conditioned; nothing inherent about it.

Let’s bring sexy back as a pair of Dansko clogs, Born slip-ons, L.L. Bean slippers, Saucony running shoes–whatever appeals to your aesthetics and promotes your well-being. Women in their 40s and 50s (prime bunion-surgery age) are to be reckoned with for their purchasing power. For the average cost of an Austin Bunionectomy one can purchase 64 pairs of Danskos!

Put your money where your feet should comfortably be. I will, too, once I am up on them again.