This Week in "Blame It on Emasculation": The London Riots - Ms. Magazine
Skip to content 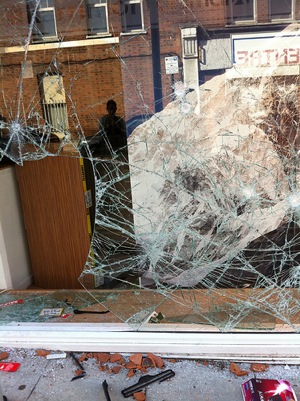 Talking heads, academics and news outlets have been speculating about the motives behind the recent London riots. Most have agreed on a complex combination of deep-seated racial and economic inequality, made worse by record-high youth unemployment rates and abuses of authority by London police.

But right-wing writer and rifle-enthusiast Frank Miniter has a different opinion. In an editorial for the conservative National Review, Miniter explains the problem: The riots boil down to the British people’s “unmanly” surrender of their right to bear arms.

“As the English hand their government more of their individual liberty–and thereby their self-reliant manliness–their government becomes more authoritarian. Individuals have diminished means for protecting themselves and their property, which should have made London’s looting, vandalism, and other crimes very predictable. … The loss of their right to self-preservation has created a culture of dependency on government (for protection and so much more) that has helped neuter the English male.”

Luckily, Miniter has just the solution to re-inject the U.K. with a much-needed dose of testosterone: Give them back their guns.

In the humble opinion of this feminist, only the executive field editor of the NRA’s American Hunter magazine would think, What’s the solution to rioting in the streets of London? I know! Let’s give them all firearms!

In case we were worried Miniter’s views were sexist, the author of The Ultimate Man’s Survival Guide: Recovering the Lost Art of Manhood reminds us: “Gun rights are women’s rights, as they make the frailest woman the equal of the strongest male.”

See? Even if he implies that to be woman-like is to be weak, subservient and bring on the downfall of society, Miniter and his posse of “manly” men really have women’s best interests at heart.