The Awful Truth About Women's Lives in Prison - Ms. Magazine
Skip to content 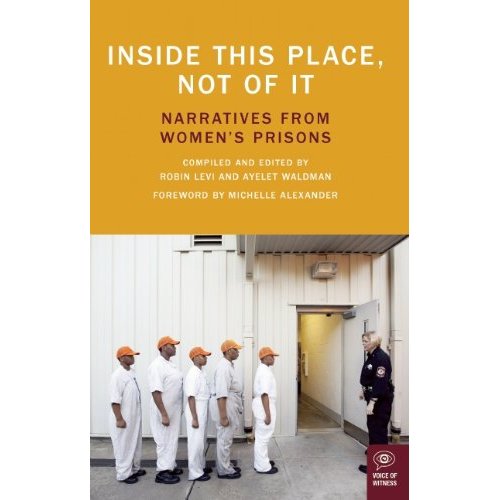 Inside This Place, Not of It: Narratives from Women’s Prison provides a chilling glimpse of the human rights abuses suffered by women in U.S. prisons.  The book is essentially a set of edited interview transcripts, with each chapter providing a first-person account of a different currently or formerly incarcerated woman. What these narrators reveal about their lives will cause readers to shudder at the myriad physical, sexual, and psychological abuses they have endured.

The book’s editors, Robin Levi (Human Rights director of Justice Now) and Ayelet Waldman (best-selling author and essayist), used their combined expertise in advocacy and prose styling to knit together intellectually compelling and emotive testimonies from the more than 70 interviews they conducted with women who have endured imprisonment.  The book makes for a captivating read, but far more than that, it illuminates several major forms of injustice which characterize these women’s lives.

The level of healthcare provided to U.S. prisoners is not merely inadequate; it often constitutes torture. One woman in this book was given a hysterectomy without her knowledge or consent–an incident that hearkens back to our nation’s troubled history of sterilizing African American and Puerto Rican women.  Other humiliating and potentially life-threatening instances of medical neglect and harm inflicted by guards and medical professionals pepper the life stories of the women in this book. Women prisoners have been forced to give birth while shackled to hospital beds and given unnecessary C-sections, only to have their children taken from them within days of their births.  One incident in the book describes a hugely pregnant woman who is forced to bend over while naked and display her anus and vagina to guards during a strip search; because of her enormous belly, she struggled for several minutes to stand up again after this humiliation, and rather than offering to help her regain her balance, the guards mocked her. Despite her many attempts to seek medical help in prison, another woman’s diabetes went untreated for so long that she nearly died.

It is a horrible thing for the uninsured and under-insured outside prisons to struggle (and often fail) to receive adequate health care. Compounding this with incarceration adds a new level of terror. The incarcerated face their medical problems in a place where they are cut off from family and friends, who often do not receive word of their loved ones’ illnesses or injuries until the prisoners are well enough to contact them or have died.  Prisoners cannot seek a second opinion about their medical care and do not always have access to their medical records. They cannot advocate for themselves, and concerned parties in the free world must have uncommon knowledge and resources to be able to even attempt to advocate for incarcerated patients.

The fact that a large percentage of women [PDF] endured sexual and/or physical abuse prior to their incarceration seldom seems to be absorbed by the general public or those who work in the criminal justice system.  The personal accounts in this book provide a solid emotional and intellectual grounding for lay readers and criminal-justice experts alike to understand the contexts of the crimes women commit and the social forces which propel the poor life choices that land them in prison.

The likelihood that incarcerated people will be raped seems to be taken as an accepted fact by the general public in the U.S., as evidenced by the abundance of prison rape jokes which appear to crop up in even the most innocuous of places. I can only supposed that this dire reality for many prisoners seems humorous to people only when the folks making and responding to these jokes fail to see prisoners as human beings.  Inside This Place, Not of It brings home the vulnerability of people held captive by those who have the power to abuse them, often over the course of many years.

This book is the latest edition in McSweeney’s Press’s nonprofit Voice of Witness series, which uses oral histories to address social injustice and human rights crises. This kind of publishing work is vital to record the lives of people who seldom have public platforms from which to tell their stories.

Ashley Lucas is an Assistant Professor of Dramatic Art and Producing Artistic Director of the Teatro Latina/o Series at UNC Chapel Hill. She is also the author of an interview-based play, Doin’ Time: Through the Visiting Glass, which she has performed as a one-woman show throughout the U.S. and in Ireland and Canada. With women’s studies scholar Jodie Lawston, Lucas co-edited the book Razor Wire Women: Prisoners, Activists, Scholars, and Artists (SUNY Press 2011) and writes for a blog by the same name (http://razorwirewomen.wordpress.com).