Ms. Turns 40-And Wonder Woman's Back On Our Cover! - Ms. Magazine
Skip to content 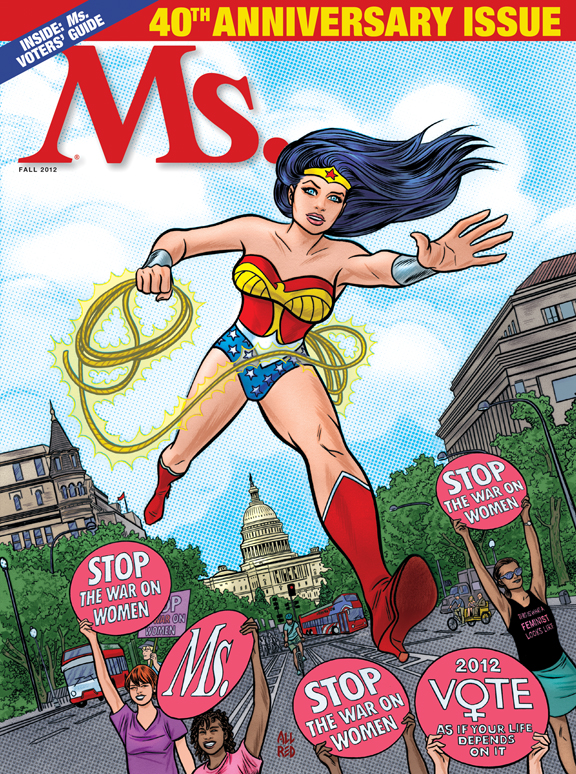 Forty years after Ms. thrilled feminists with its inaugural cover declaring “Wonder Woman for President,” the magazine once again features the iconic superhero. This time, Wonder Woman is striding down the streets of Washington, D.C., behind women marching to stop the attacks on their rights.

Wonder Woman has been an enduring symbol of women’s power. We could imagine no better way to urge women to use their own power–the power of their vote–to stand up for themselves and their rights in the coming elections.

The 40th anniversary issue of Ms.–available on newsstands October 2–examines what’s at stake for women in November, from access to safe abortion and birth control to economic security and workplace equity to Medicare and Medicaid and Social Security to protections against violence. We also provide a voters’ guide to key ballot initiatives and a look at the record numbers of women running for Congress.

The issue includes an essay from Ms. founding editor and feminist icon Gloria Steinem, reminding readers that the backlash to women’s progress these days is a reaction to the “frontlash”–the success feminists have had in changing laws and attitudes over the last 40 years.

So Ms. magazine is 40 years old, can you believe it!?! We’ve gone through eight presidents and four generations. The world population has nearly doubled.

And all the while, Ms. magazine has been there.

Women have gone from second-class citizens trapped in a “mystique” to fierce feminist warriors, fighting against gender oppression and on behalf of equal rights—both for themselves and for their global sisters.

And if you thought Ms. played an important role over the past 40 years—in the feminist struggles for reproductive rights, against rape and violence, for equal pay and educational opportunities, on behalf of civil and LGBT rights—just wait for the next 40 years.

We’ll still be dissecting the forces of opposition to women’s rights, from economic interests that profit at women’s expense to religious fundamentalists bent on maintaining a patriarchy. We’ll still be making an intersectional analysis of oppression, untangling the role not just of gender, but of race, class and sexuality.

We’ll be celebrating women’s progress here and around the world, and we’ll be working to uplift women who are challenged by poverty, violence and enforced ignorance. You can always count on us to sound the alarms and rally the troops.

As information sources are caught in the whirlwind of a digital revolution, and as the world thereby grows smaller, we intend to keep the voice of Ms. loud and large and clear. Want to know what feminism and feminists are up to? Read about it in Ms., whether in print or online. We’ve been your source for 40 years; watch for what we’re going to say next!

Want this fabulous new image of Wonder Woman on your wall? Join or renew your Ms. membership today and you’ll get a poster version of it as a premium, along with a year’s worth of Ms. magazine sent to your door!