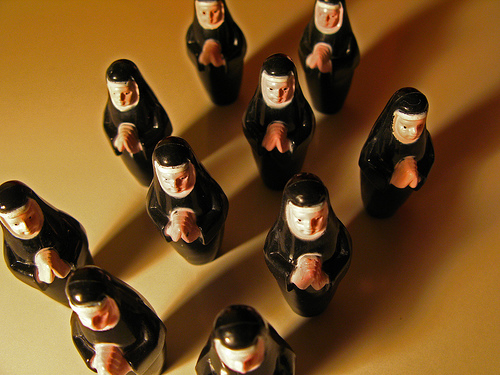 It was indeed outrageous that the Reverend Raniero Cantalamessa, with the Pope in eyeshot, compared the public outcry over the Catholic Church priest abuse scandal to homicidal anti-Semitism in Nazi Germany.

But there was another reason to be troubled by Cantalamessa’s homily. Though he admirably addressed the crucial need to end violence against women, he did so without any acknowledgment of the church’s own culpability in the abuse, endangerment and intimidation of women.

“Much of this violence [against women],” he declared soberly, “has a sexual background.”

Yes, let’s start there. In 2001, a year before the pedophilia crisis hit the news, the National Catholic Reporter analyzed internal church reports written by two Catholic nuns—a physician who was a Medical Missionary of Mary and the AIDS coordinator for the Catholic Fund for Overseas Development—documenting the sexual exploitation of nuns by priests in 23 countries on five continents.

One of the most stunning allegations concerned a nun impregnated by a priest who forced her to have an abortion; she died from complications, and he officiated at her funeral.  Priests were also alleged to have raped young nuns who approached them for the required certificates to enter religious orders; to have told nuns that oral contraceptives would protect them from AIDS; and to have used nuns as “safe” alternatives to prostitutes in countries plagued by AIDS—with some priests going so far as to demand that heads of convents make the nuns sexually available to them.

And it is not just nuns, of course. As in the recently reported case of a priest who allegedly molested a 14-year-old Minnesota girl and was not de-frocked but simply transferred to a parish in India (after the Vatican supposedly toughened up its policies), thousands of girls, from infants to adolescents, have been molested by priests. Adult Catholic women have been subject to clerical transgressions that range from sexual exploitation to harassment to rape to beatings to potentially negligent homicide.  Many sexually active priests have left a trail of wounded women and fatherless progeny in their wake—testament to the hypocrisy of a “celibate” priesthood.

Cantalamessa expressed great concern about violence “in the relationship between husband and wife,” praising the “many associations and institutions” that provide women with support. Yet the founders of those associations and institutions were not Catholic clergy but secular feminists, whom the church hierarchy regularly and ruthlessly condemn. And if domestic violence is such a priority for the church, why did Pope John Paul II beatify Elizabeth Canori Mora–a woman subjected to both physical and psychological violence at the hands of her errant husband–for her “absolute fidelity” to the sacrament of marriage?

And what of the church’s well-known policies that endanger women worldwide?

It refuses to approve condoms to prevent AIDS, a position that 60 nuns calling themselves “Sisters for Justice of Johannesburg” publicly decried several years ago because of its effect of women and girls. They urged the Church fathers to change their life-threatening theology and recognize that 14- to 19-year-old girls face the greatest incidence of new HIV infections because of the “high incidence of forced or reluctant sexual intercourse,” and that  women are at great risk of infection due to “abusive, oppressive or desperate relationships or circumstances.”

The Church absolutely condemns pregnancy termination, leaving 60,000 women to die each year from botched procedures. Their position is so extreme that when a 9-year-old girl who had been raped by her stepfather obtained an abortion, they excommunicated her mother and the doctor who ended the pregnancy.

Cantalamessa pointed out that intimidation is violence too, empathizing with the “wife and children [who] live under constant threat of ‘Daddy’s anger.’”  Yet, this church hierarchy continues to threaten any woman in the church who dares challenge authority and call for radical change.  And make no mistake; it is women in the church who are the ones clamoring for change.

It is Catholic women who have written about gender-inclusive prayer language and been fired for it; defended the rights of gays and lesbians and are being silenced for it; fought for women’s ordination and have been excommunicated for it; blown the whistle on priest sexual shenanigans and have been relieved of their duties for it.

Many of these change-makers are nuns. Witness the 60 leaders of religious orders, representing 90 percent of the 59,000 Catholic women religious in the United States, who defied the American bishops and supported health care reform, insisting that legislation that helped pregnant women was “a REAL pro-life stance.”

Representative Bart Stupak—who at that point, like the bishops, opposed health-care reform for being insufficiently anti-abortion—tried to minimize nuns’ power, but it is real. It is why the Vatican has launched two confidential investigations into the lives of American nuns, not American bishops. One is examining the “quality” of their religious lives; the other is focused on their alleged “doctrinal” failures—like questioning an all-male priesthood.

In relationship to that angry dad, Cantalamessa suggested reminding him that “The word addressed to Eve after the fall:  ‘He (the man) shall rule over you’…was a bitter forecast, not an authorization.”

Someone ought to tell the church fathers that.

(A version of this piece was written for Women’s Media Center online; it also appears at the Huffington Post.)

Image courtesy of http://www.flickr.com/photos/pagedooley/ / CC BY 2.0