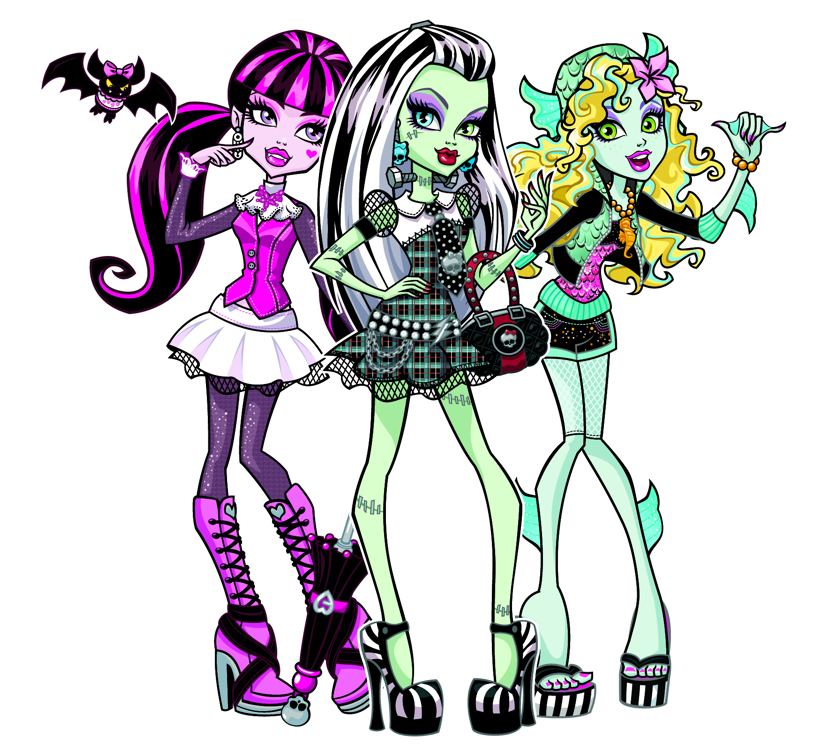 Mattel’s Barbie never had her own kids, but the toy company isn’t opposed to procreation. In fact, it has now envisioned girl offspring from well-known supernatural figures–and molded them into doll form.

Deliberately scheduling the official launch of Monster High on Friday, Aug. 13, Mattel has unleashed a next-generation team of progeny from media icons Frankenstein (Frankie Stein), Dracula (Draculaura), The Werewolf (Clawdeen Wolf), The Mummy (Cleo de Nile) and a Zombie (Ghoulia Yelps). They’re all daughters, from a patrilineal line, with the exception of the sole boy character, Deuce Gorgon, son of Medusa. Of course, there were never as many woman monsters available to reproduce (Bride of Frankenstein?).

With the tagline “freaky just got fabulous,” the Monster High characters seem a mashup of Addams Family quirkiness and the new zeal for vampires and werewolves (think Twilight). As an advertising reporter pointed out, marketers seek to bridge the generational divide between adult fans of these characters and their kids.

Poised to inundate the teen and tween set with what has been called the biggest brand launch in Mattel’s history, there will be no escaping the gaggle of monstrous pals. There is already a YouTube channel in motion, a clothing line at the chain store Justice, Halloween costumes lined up through PartyCity, a series of books authored by YA superstar Lisi Harrison to be released Sept. 1, and a movie in the works with Universal Pictures. Mattel has called on well-known music video directors, choreographers and producers, as well as American Idol Allison Iraheta, who is slated to create music for an animated special debuting this fall.

Tim Kiplin, general manager for Mattel, said, “There’s a universal truth behind Monster High. Who doesn’t feel like a freak in high school?”

It’s clear that the new brand is eager to tap into girls’ desire for escape from ordinary boundaries. It’s a good premise, and certainly one with potential to deliver a subtext about “normalizing” difference and accepting a wider range of identities.

But, unfortunately, the Monster High line of dolls does exactly the opposite. The five main girl characters debut with high-heeled platform shoes, nipped waists and hyperfeminine long hair. This is what the next generation looks like, even for monster spawn?”

While Clawdeen Wolf admits her “freaky flaw” is hair that is “worthy of a shampoo commercial, and that’s just what grows on my legs,” she follows this up with, “Plucking and shaving is definitely a fulltime job, but that’s a small price to pay for being scarily fabulous.” Her favorite activity? “Shopping and flirting with the boys!”

Cleo de Nile exudes a sense of royal entitlement, not only due to her Egyptian ancestry but also because she is “captain of the fearleading squad.” Although her mean-girl streak is often curbed, sure enough the hot (and only) guy, Deuce Gorgon, is her boyfriend.

Nerd girl Ghoulia Yelps comes complete with horn-rimmed “nerd glasses,” and her pet is an owl (“Sir Hoots A Lot”).

In the YouTube webisode “Cyrano de Ghoulia,” the clique fits her with an earpiece and coaches her from afar as she meets up with her crush, seeking to “improve” her Zombie speech and manners–although her own unique speech and habits win over the guy in the end. In “Clawditions” the girls foil one another through auditions as they compete for a role in the school play. When Frankie Stein realizes she’s sprouted a pimple in “Bad Zituation” (from eating the sugar eyeballs dispensed by the vending machine), Cleo de Nile quickly whips out her cell phone and in a classic act of social aggression emails a snap to everyone. Frankie runs from the hallway into the girls’ bathroom, where her friends offer a paper bag for her head. She thanks them for standing by her, but the video ends with Cleo’s face covered in spots and Frankie innocently asking if she’s tried the new eyeballs.

Deliberately spawned for a current generation of girls, the repackaged stereotypes of Monster High offers nothing new. The series has the potential to use its supernatural characters to comment on the pressures of fitting in. But recycling themes about popularity, fashion, competition within cliques, appealing to the opposite sex and stylized femininity/sexiness is a disappointment. Telling girls that these values remain constant for women–even those of supernatural species–not only misses a creative opportunity but, more confusingly, reinforces the stranglehold of expectations that this series supposedly wants to subvert.

Above: Photo of Monster High characters. Used with permission from Mattel.