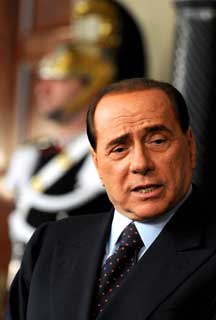 Recently I have been writing on how Arab and Muslim women have taken to the streets in political protest, shattering stereotypes in the process. Over the weekend we saw another group of women do the same, this time in Italy.

Under the official banner of “If Not Now, Then When,” thousands of Italian women protested across the country, in 230 cities in Italy and 28 cities around the world, sending Prime Minister Silvio Berlusconi a clear message: Basta! (Italian for “enough”).

Obviously that is what these women have had–enough of Berlusconi’s scandals and enough of his derogatory treatment of women. And now Italy’s justice system has had enough as well: He’s been ordered by a judge in Milan to stand trial in April for allegedly paying to have sex with Ruby Rubacuori (her pseudonymous surname means “heartstealer”), a 17-year-old Moroccan belly dancer (real name: Karima el Mahroug), and then using his influence to get her released from custody after she was arrested for stealing. Sex with minors is illegal in Italy. Berlusconi calls the charges “groundless” and says he won’t resign from  office.

Berlusconi’s public display of his private pecadillos has been making news for years. Anyone remember when he stacked his Parliament with attractive but unqualified former beauty queens and actresses in countless and meaningless positions? Things only got worse from there. There has been investigation after investigation recently into his lurid “sex parties” at his various mansions and villas, from Sardegna to Milan, involving scores of young women.

We’re not happy to be a second-rate country or an ugly television soap opera. We want a country in which it’s possible for women to live in dignity. A country that does not sustain women’s capacity for growth is a country that goes backward.

Berlusconi dismissed the protests, stating: “I have always tried to act in such a way that every woman feels special.”

Spoken like a true sexist, Silvio. But you can’t dismiss these new charges as easily.