At Last, SoCal Women Can Holla Back - Ms. Magazine
Skip to content 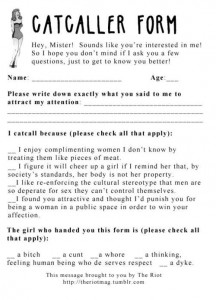 The catcall. The “hey baby,” the car honk, the low whistle, the kissy noise.

Though it is dismissed as an inevitable part of urban living for women, it slowly chips away at the cocoon of safety and confidence women weave around themselves as they leave their houses each day.

It’s patriarchy flexing its muscles, but now, women are fighting back.

Hollaback, an East Coast movement gone global that aims to end street harassment, has finally hit the West Coast with the Hollaback SoCal blog, a space that allows victims of street harassment to vent their frustrations and post cell phone snapshots of harassers.

“From high-femme to gender-queer, this is a space for all of us. We are multilingual and multicultural, and we take no shit,” says the Hollaback SoCal founder, gender studies professor and Ms. blogger Shira Tarrant. Tarrant believes everyone should feel confident and safe when they walk down and street. “It’s your right to be your badass self.”

To judge by the dozen or so Los Angeles-area stories of street harassment already up on the site, it launched not a moment too soon.

With strides made in ending sexual harassment in school and in the workplace, Tarrant says, the streets have become the frontier where men can once again assert their masculinity by invading the personal space of women.

“Street harassment is about power […] the effect is that we start to self-police where we go and how we walk. We go on chronic high alert.” says Tarrant. “That’s a control issue. And for perpetrators, street harassment is a gateway crime that makes other forms of gender-based violence okay.”

Thousands of personal stories have been told since activist Emily May started the very first Hollaback site in 2005, and street harassment, an often overlooked issue, is finally turning into something people can vocalize and mobilize against. Activists like May and Tarrant hope these countless voices will help shift the public consciousness and lead to positive change.

“Sixty years ago, we had separate water fountains for white people. Today we would find that outrageous.” says Tarrant. “We believe that one day the idea of catcalls and groping strangers will seem just as outrageous.”

Photo courtesy of the Riot Mag.