How an Ill Woman Found Common Ground with a Wild Snail - Ms. Magazine
Skip to content 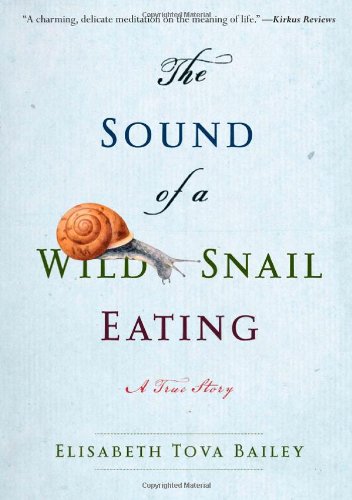 Elisabeth Tova Bailey’s acclaimed new book, The Sound of a Wild Snail Eating, is about her year of observing the surprisingly fascinating life of a snail at her bedside while she was ill. As I read it, I kept thinking of Virginia Woolf’s 1930 essay “On Being Ill.” They both are lyrically written, economical in size and quietly powerful. As Woolf argued, the alternate underground universe of the unwell is a greatly under-covered topic in literature. This includes one of the illnesses with which Bailey was eventually diagnosed: chronic fatigue syndrome, or CFS–also known, in other countries, as myalgic encephalomyelitis, or ME. I interviewed Bailey about how a snail helped her convey a story about human “weakness.”

Ms. Blog: How does your book add to the dialogue about these auto-immune related illnesses that affect women more frequently then men and that are still not well understood?

Elisabeth Tova Bailey: With its emphasis on natural history, my book is unusual as an illness narrative. There is the assumption that women tend to be more emotional than men, even more so when experiencing or describing their illnesses. So I wanted to come at the experience of illness from a different angle. Instead of writing directly about illness, it became the backdrop against which I tell the natural history of an individual snail.

The snail lived in a terrarium at my bedside, and that simple framework draws readers in. They become intrigued with the snail. In order to follow the snail on its adventures, they have to enter into the world of illness as well—a world they otherwise might not enter, might even want to avoid. Once the emotional bond with the snail was in place, I could then move deeper and let the reader explore how illness can isolate a patient from society.

The natural-history focus attracts a readership of both genders, and not just patients but also readers from the healthy population. That expanded readership lets the book educate readers who might not otherwise read a women’s- illness narrative.

Although my diagnosis is spelled out in the epilogue, it has been interesting that reviewers will often refer to my “mysterious neurological disease.” Readers are so engaged in the story that my specific diagnosis becomes less important. No one questions it. Who could watch a snail for a year unless they were severely ill?

What have your readers with this illness told you they most identify with, that they haven’t seen expressed elsewhere?

I receive incredibly moving letters from readers. They will often quote back to me a sentence or two from the book and say that I’ve captured completely what they experience. It’s often different sentences for different readers, but usually it’s that I’ve revealed how they have felt isolated from society by their illness or how their bodies let them down, or the level of profound weakness they experience.

Describing the level of weakness caused by mitochondrial and autonomic dysfunction and chronic fatigue syndrome is very difficult. We have endless descriptive words for pain: sharp, dull, aching, throbbing, but it is much harder to capture the sensation of profound weakness, which is a truly awful feeling. It’s difficult to describe it directly, and so in writing about it I often wrote more about how it limited me than what it actually felt like.

The lack of vocabulary to describe the sensations of “weakness” is a problem in these sorts of diseases—it limits diagnoses, discussion and understanding. There is the well-known visual pain management chart of a person still able to smile at a pain level of 1 or 2 and crying at a pain level of 10. We need a weakness chart that can be that easily diagnostic as well.

How strongly did you identify with the gastropod?

At my worst level of illness, my life matched its life more than that of my own species. So I identified with the gastropod’s way of life and sense of time quite strongly.

I also envied many of the snail’s traits. What human would not want to be able to climb straight up a wall or glide across a ceiling or have strength ten times what is normal for us? And if we could hibernate when times were tough, think how useful that would be! To find myself envying the snail put the limits of our own species into perspective, and that was humbling.

The snail as a whole animal is what astounded me most. What appears at first to be a simple creature is actually a complex being, capable of everything any other animal form is capable of: a complex love life, an epicurean appetite, finding a comfortable place to sleep, skilled locomotion, multiple defense mechanisms. That’s what was so riveting. That I could write an entire chapter on slime or another entire chapter on the way a snail hibernates—there was just so much to say.

Cross-posted and edited from SheWrites.com