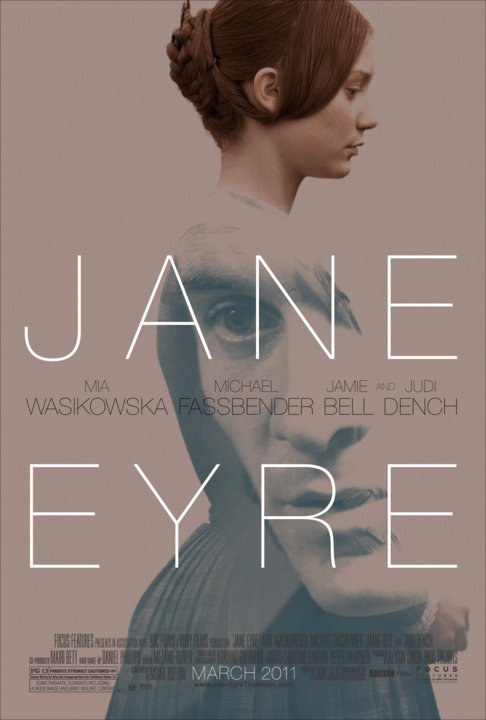 It’s a sign of success, I suppose, that one can Google “feminism Jane Eyre” and find websites willing to sell you a term paper on the subject. We’ve come a long way, baby. When I was in college and graduate school, we were just discovering what it meant to read a novel–even a novel by a woman–from a feminist point of view.

Then came, among other groundbreaking critical works, Sandra M. Gilbert and Susan Gubar’s The Madwoman in the Attic: the Woman Writer and the Nineteenth Century Literary Imagination (1979). The madwoman in the title appears in Charlotte Bronte’s evergreen 1847 novel Jane Eyre, becoming for Gilbert and Gubar a symbolic depiction of Victorian women as either uber-repressed angels or unseemly, passionate monsters. Madwoman, in turn, generated an industry of critiques, thus widening further the focus of feminist criticism.

IMDB describes the recently released film adaptation of Jane Eyre in simple, hardly feminist terms: “A mousy governess who softens the heart of her employer soon discovers that he’s hiding a terrible secret.” If that was all the novel, which details Jane’s maturation from her abusive childhood to her eventual employment as a governess and later marriage, offered, it would have long disappeared from memory, but its influence in literature and film–IMDB lists more than 20 worldwide film and TV adaptations, dating back to 1910!–stubbornly persists.

I have to confess: Jane Eyre had such a deep impact on me when I was young that I built a window seat in the first house I owned, imitating Jane’s at the start of the novel–where she admits, in the famous opening line, “There was no possibility of taking a walk that day.” While high school students have been known to moan when they are assigned the book, the novel not only enjoys continued popularity but a certain retro hipness. Today, you can purchase a t-shirt that reads “Jane Eyre is my homegirl,” a tote bag decorated with portraits of Charlotte and her sisters Emily (who wrote Wuthering Heights) and Anne (who wrote The Tenant of Wildfell Hall), a fridge magnet that declares, “I am the madwoman in the attic,” or even the more cryptic “I’m in ur attik, bein ur wife.”

What is driving Jane to her own psychic attic? Bronte looks at the problem from many angles: Without family, fortune, good looks or opportunity, Jane is trapped in survival mode. Yet she is intelligent and insightful, and having survived a horrific childhood she is tough and determined not to resign herself to a boring job or a loveless marriage.

For those who have never read the book, it’s important to know that it is narrated retrospectively by Jane herself, who at every turn shows her awareness of how it will all end. Here’s just a taste of her insights into the limits of her life as a governess in an isolated country house:

It is in vain to say human beings ought to be satisfied with tranquility; they must have action; and they will make it if they cannot find it. Millions are condemned to a stiller doom than mine, and millions are in silent revolt against their lot. Nobody knows how many rebellions besides political rebellions ferment in the masses of life which people earth. Women are supposed to be very calm generally: but women feel just as men feel; they need exercise for their faculties, and a field for their efforts as much as their brothers do; they suffer from too rigid a constraint, too absolute a stagnation, precisely as men would suffer; and it is narrow-minded in their more privileged fellow-creatures to say that they ought to confine themselves to making puddings and knitting stockings, to playing on the piano and embroidering bags. It is thoughtless to condemn them, or laugh at them, if they seek to do more or learn more than custom has pronounced necessary for their sex.

One thing I love about Jane Eyre is its ability to continue to draw readers into her plight—a skill needed more than ever today, at least among the college students I teach, who seem to take their freedoms for granted and who consider the Victorian age a distant planet, rather than the progenitor, in so many ways, of our own age. Jane Eyre provides just the right dose of irritation and revelation. Take, for instance, a comment written by a current student of mine, Megan Allen, on the class online discussion board:

In the beginning of Jane Eyre I couldn’t help but find Jane somewhat annoying … okay maybe really annoying. With lines like ‘I like to serve you, sir, and obey you in all that is right,’ and the fact that she falls in love with her ‘master,’ it’s easy to overlook the most important parts of Jane Eyre’s character and dwell on the scenes in which she plays the role of a vulnerable bystander. But I’ve realized as the novel progresses, she is not annoying at all. In fact, she learns to stand up for herself and, at a time when women were constantly told how insignificant their worth was compared to a man’s, this move away from helplessness proves very impressive.

So it concerns me that the newest film adaptation of Jane Eyre, while beautiful to watch and well-acted, rushes too quickly past the key elements that help define Jane’s consciousness-raising and oversimplifies the plot. The madwoman (and I’m not going to let on who that is if you don’t already know) barely makes an appearance, though her impact on Jane’s lot is as devastating as ever. Madness does seem to grab a distraught Jane from the opening moment of the film, as she escapes from Thornfield in screenwriter Moira Buffini’s restructuring of the story. But I got the sense that Buffini had speed-read Gilbert and Gubar’s analysis, catching the bit about madness but skipping a full understanding of the complex social forces that engender it. Charlotte Bronte’s nuanced insight into the competing pressures on a young woman without any apparent family, friends or prospects other than those she makes for herself—the choices she must face between duty and desire, independence and subservience—seems lost in the lovely fog of the moor.

This new version of Jane Eyre, in the end, is a watered down, much tampered-with reduction that turns it into a gothic romance. Director Cory Fukunaga claims, “I’ve spent a lot of time rereading the book and trying to feel out what Charlotte Brontë was feeling when she was writing it.” Sorry, Cory. I think you have to have walked a little in her boots to know that.