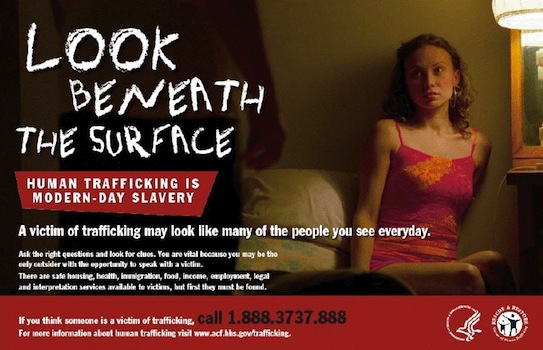 What exactly is human trafficking and how can we help stop it? One of the best people in the U.S. to answer such questions is Department of Justice-certified human-trafficking consultant Dottie Laster, who has trained more than 5,000 police officers on recognizing and combating trafficking. She hosts a weekly internet radio show, “Trafficked,” on Here Women Talk Radio. I had a chance to interview her about trafficking in the U.S. today:

Why have we begun hearing so much about human trafficking in recent years? Is it increasing?

I think that the rates have always been high, but we’re just becoming aware of it. However, it’s growing exponentially. Human trafficking is a lucrative and relatively low-risk crime, so it expands rapidly.

The Internet has made it worse. Social sites and chatrooms make it easier to connect victims with johns, with less and less risk for the people behind the crimes–it’s more difficult for police to intervene online. However, it certainly doesn’t lessen the risk for victims.

And in the United States, we have a very strong economy, so we have a large demand. The demand outstrips the willing supply, especially in sex trafficking, so traffickers must coerce their victims.

What types of coercion do sex traffickers typically use?

Most of the victims are lured with false or fraudulent promises. “I have a job for you. I have a place for you to stay.” For international victims, their identification is usually then held from them.

Then there are some women who are kidnapped or sold by loved ones. This is an extremely heinous form of trafficking because it breaks all the bounds of trust.

Then there are “Romeo Pimps” who target, isolate, seduce and brainwash girls. They will say, “I love you. I love you. I’m the answer to your prayers.” They will scare friends away. They will lie and say, “Hey, your mom called and she really doesn’t like you.”

The Romeo Pimp uses little drops of love throughout the day to keep the target attached. The brainwashing is on so many levels that target don’t know which way is up. No bearing at all. They’ll feel like they made this choice and it’s their decision, and that they caused all this pain. Their pimp will starve them, beat them, and they’ll think it’s their fault because they didn’t make enough money.

What are some myths about trafficking that you can clear up?

The first big lie is the media fairy tale that prostitutes are willing. Complete consent is very rare; in my eight years of working in this, I have never yet seen a case where the woman got all the money and made all the choices. Every time I had a case where it appeared that way, once we heard the rest of the story we found that she was coerced and someone else was benefiting. The person exploiting the women is selling a product, making her appear willing even when she’s not. He makes her work even when she’s tired, hurt and overworked. The only two people who have free choice in the transaction are the buyers and the traffickers.

Another myth is that human trafficking requires movement. In fact, trafficking happens whenever someone is held in the service of another through force, fraud or psychological coercion. Many people in the U.S. don’t realize that it’s probably happening in their neighborhood.

What are the barriers that prevent us from effectively addressing human trafficking?

The biggest barrier is that we keep arresting the victims. I spend most of my day getting victims of human trafficking out of jail. They are typically arrested for prostitution or due to police believing that they’re here illegally, [even though] the Trafficking Victim’s Protection Act says they should not be arrested but should be treated as victims. While detained, victims think everyone dislikes and judges them. Everything and everyone tells them they are to blame.

Another barrier is that people tend to not believe the victim. It’s usually such a hellish tale that people who haven’t heard it or seen it before find it hard to believe. This is especially true if the victim is a U.S. citizen. We’re [supposed to be] the “land of the free.” We’ve dealt with slavery in historical times, but have a hard time thinking that it exists today.

Another big barrier is that the justice system doesn’t always properly prosecute those involved in sex trafficking. [Former NFL player] Lawrence Taylor admitted in court to having sex with a 16-year-old who had been beaten by her trafficker just before she arrived, and he received no jail time. This sort of thing happens all the time, and it sends a very strong message to prostituted citizens that they will not be protected.

What needs to happen, then?

I think public awareness is increasing, and I’m encouraged by that, but I am still surprised by how many people don’t see human trafficking when it’s right in front of them.

Law enforcement and the FBI have human-trafficking programs throughout the nation, and there are some amazing folks who are doing good work, but it’s very small compared to the scope of the crime. Human trafficking is a $9.5 billion annual industry, and it’s being fought like drug crime, with a few agents. When you understand the scope, you understand we need more resources and dedicated people. As a nation, we need to make this heinous crime the highest priority.

What can the average person do?

Write an informational letter to your local newspaper; these can be very powerful.

Organize community “block walks” to hand out fliers and inform neighbors about human trafficking signs to look for.

Pass out posters. The Department of Health and Human Services has free posters with a hotline number, and you can take them to your police department, your hospital, local churches or your school and ask to post them.

My favorite type of activism is to do a five-minute patrol briefing at roll call for local police. The key is, don’t go over your time. In my briefing, I define human trafficking, then give signs to look for: someone not in control of their identification, any minor involved in commercial sex or anyone whose communication or transportation is controlled by another. I leave them with a card with these indicators, and it does seem to work.

Here are sites with more information and resources:

Image courtesy of the Department of Health and Human Services website.

Demystifying Cyber: Cybersecurity Should Be on Everyone’s Radar, Says Congressional Staffer Hope Goins
‘The Most Vulnerable of the Vulnerable:’ The Story of Erica Sheppard, a Lifelong Victim of Abuse on Death Row
The U.S. Just Got One Step Closer To Over-the-Counter Birth Control