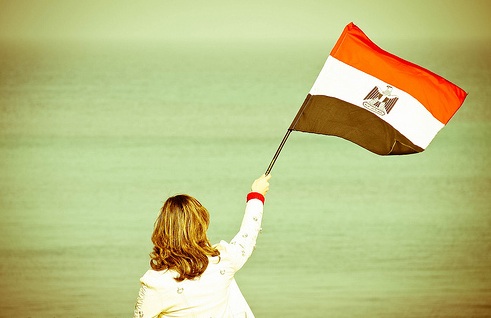 Bothaina Kamel, a well-known TV talk-show host and activist, has recently declared her intention to become Egypt’s first woman president. No stranger to controversy, Kamel is best known for tackling topics usually considered taboo to speak about in public, such as sexual relationships and domestic violence. She became a vocal advocate for democracy and transparency after leaving her role as a newsreader for Egypt’s state television in 2005.

Kamel’s run comes at a time when the question of women is more significant than ever. Despite the high visibility of women alongside men in Tahrir Square, the fight for gender equality in Egypt is far from over. Hundreds of Egyptian women returned to rally for equal rights and an end to sexual harassment, despite heckling and harassment by men calling for their return home.

Doaa Abdelaal, project manager of Nazra for Feminist Studies–a Cairo-based research and activism group–believes that Kamel has potential as a candidate despite lacking a “concrete legacy” among Egyptians. Abdelaal also thinks that the presence of a female candidate is significant at this crucial junction in post-revolutionary Egypt. According to an NPR report, Kamel’s fear is that women will be left out of regime-change unless they demand that the process be more inclusive. She is part of the fight to make sure that women’s rights do not become sidelined in the formation of a new Egyptian government.

For Eman Hashim, a Cairo activist and writer, Kamel’s call for female participation post-revolution is extremely important. She believes, however, that the lack of women’s representation won’t be solved just by placing women in significant roles but also by discussing why the lack of women was not problematized in the first place. According to Hashim, “A new set of governors were picked and none of them was a woman and no one is even talking about that.”

Former Egyptian president Hosni Mubarak introduced quotas that brought women into parliament, and supported international programs dedicated to reduced gender disparity. But despite these developments, life for women improved little. The efforts seemed to come more from a desire to appease Western partners than to actually raise women’s status. Indeed, the presence of women in leadership positions doesn’t guarantee that they will advocate for gender equality. Nawal El-Saadawi, the well-known Egyptian activist and writer, encourages women to be politically active to change the system but is critical of what she calls “patriarchal capitalist women”–citing the examples of Margaret Thatcher and Angela Merkel, among others.

While her chance of victory may be slim, Kamel’s candidacy creates an opportunity for dialogue about the role of women in Egypt’s new government. But Hashim believes that while her run would open doors for women to be taken seriously in politics, it’s most significant at this time to place “national interest before anything else” and to “act as a citizen” to unite democratic factions that could eventually ensure equality for women.

El-Saadawi, however, believes ensuring progress on women’s rights is just as significant as “liberating the country from fanatics.” She stresses the need to integrate women’s issues with all societal issues, whether religion, politics, capitalism, racism or sexism. She herself will support candidates based on a “history of resisting previous corrupt regimes and the patriarchal class religious system in the state and family”, as well as “their creative work and commitment to a cause for justice, freedom, dignity, secularism and creativity.” In El-Saadawi’s eyes, the best candidate would see equality for women as a part of the path to a free and open society rather than a separate platform or issue.

With elections approaching in November, it will be interesting to see how Kamel positions herself among the growing list of male candidates. Not unlike Hillary Clinton’s bid for the Democratic U.S. presidential nomination in 2007, her run will certainly force Egyptians to confront the representation and role of women in the new Egypt.