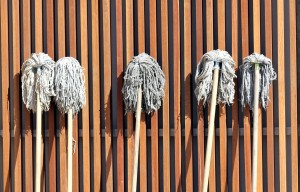 Will Kansas become the first state in the nation without an abortion provider? It looked for a while this week as if that might happen by Friday, when a host of new state regulations takes effect. These detailed rules govern everything from the minimum size of the janitors’ closets to which drugs sit on the stockroom shelves.

Clearly, these are the kinds of standards that can take months or years to meet. How much time did the state give Kansas’ three remaining abortion-providing clinics?

Two weeks. Just two weeks to comply with hundreds of requirements, or get shut down. Apparently the state of Kansas will brook no delays when it comes to protecting women from the threat of undersized broom-closets.

One clinic, Kansas City’s Aid for Women, has already been told it doesn’t meet the new standards. Another, the Center for Women’s Health in Overland Park, has cancelled its inspection and filed a federal lawsuit to block the rules . The third, a Planned Parenthood branch also located in Overland Park, expected to be denied despite being in compliance with the new requirements. But this afternoon they received their license.

Planned Parenthood said it would thus withdraw the suit it had filed. The other two clinics will go to federal court tomorrow to stop the regulations from going into effect.

Lawmakers in other states are already trying to follow in Kansas’ footsteps. According to the Guttmacher Institute, 20 states have introduced bills targeting abortion providers for special regulation this year. So be ready for a rash of new standards across the country to deny women their rights–all in the name of “protecting” them from harm.

Read more about new draconian anti-abortion legislation in the upcoming Summer issue of Ms. magazine, available on newsstands August 2–or delivered right to your doorstep.

Trish Anderton has been a feminist since founding a Women's Lib Club in the third grade. She began her journalism career in women's community radio in Boston, then moved to public radio stations WGBH, WBUR and NHPR. She moved to Indonesia in 2006, freelancing and working as Web Editor at the Jakarta Globe newspaper. She is currently finishing up a master's degree in digital media at ASU's Walter Cronkite School.