Holding Up the Entire Sky - Ms. Magazine
Skip to content 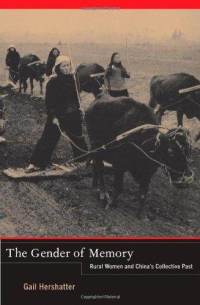 When Mao Zedong and the Chinese Communist Party took control of the country in 1949, they promised to change everything. Communism would eliminate “feudalism,” a term particularly identified with the plight of women, who were imagined to live housebound, male-dominated lives. In the New China, Mao and his cadre announced, a new age of gender equality would dawn, in which all would recognize that “Women hold up half the sky.”

That era has yet to arrive. But as University of California, Santa Cruz historian Gail Hershatter reveals in her remarkable new book, The Gender of Memory: Rural Women and China’s Collective Past, the early Communist leaders also didn’t really know much about the lives of China’s women, particularly rural women. Drawing on interviews conducted over a ten-year period with dozens of elderly rural women in Shaanxi Province, Hershatter has a much more complicated story to tell about women’s experiences in mid-twentieth-century China.

Hershatter first decimates the notion that rural Chinese women were strictly confined to the home before the Communist era. In fact, facing war, famine and chaos during the 1930s and ‘40s, plenty of women provided for their families by working in the fields, begging, or weaving and selling cloth. Later Maoist rhetoric about the “feudal old society” rendered such activities invisible, promoting instead the narrative that communism had liberated women by bringing them into the workforce.

In Mao’s China, Hershatter shows, the state placed a new spotlight on women’s labor, placing them on collective farms and training midwives in scientific birth practices to reduce infant and maternal mortality rates. At the same time, however, many household tasks—childcare, cooking, sewing—remained the exclusive responsibilities of women, forcing them to work a “second shift.” Reflecting on her life in the 1950s, one woman interviewed by Hershatter remembers only exhaustion:

The Maoist vision of gender equality did not involve the elimination of gender-specific jobs; instead, women were to partially enter men’s spheres, but not vice versa. To be celebrated by the state for her contributions to the collective good, a woman “had to do something completely different from what women had conventionally been recognized as doing, even while continuing to do most of what she had done before,” Hershatter explains.

That household work, however, received no recognition from the government, making it as invisible as the efforts of women to save their families had been in an earlier period. Rather than the promised liberation, Chinese women of the 1950s often found themselves so busy that they rarely had a hand free to hold up their half of the sky.

Maura Elizabeth Cunningham received a Ph.D. in modern Chinese history from the University of California, Irvine and is a program officer at the National Committee on U.S.-China Relations. The views expressed here are her own and do not reflect those of the NCUSCR.