The "Half-Widows" of Kashmir - Ms. Magazine
Skip to content 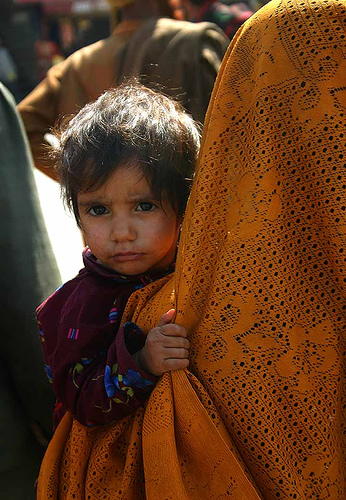 September 6: Residents of Indian-controlled Kashmir began a massive general strike today to demand the release of political prisoners. In the course of a decades-long dispute in Kashmir, the contested region between India and Pakistan, thousands of Kashmiris have been “disappeared.” A U.S. diplomatic cable released by Wikileaks last year suggests that detentions and torture by Indian security forces continue.

The International Day of the Disappeared was observed on August 30. The International Committee of the Red Cross has noted that “the tremendous impact that disappearances have on the daily lives and long-term prospects of the families, and indeed of entire communities, is still largely overlooked.” Overlooked also is how such apathy towards the “disappeared” in fact fuels the type of insecurity that continues to threaten sustainable peace. Kashmir’s “half widows” are a case in point.

Bilquees Begum* repeatedly asks whether my tea is too sweet. She smiles and adds how her husband Ahmed told her that city people liked their tea tasteless. But her smile disappears as she opens a brown suitcase, which the family keeps under lock and key. Inside are all the legal papers that Bilquees cannot read, but knows by heart.

Bilquees describes how her 35-year-old Ahmed “disappeared,” in front of his entire family, on July 20, 2003.

There was a wedding function in the family… And then, there was a raid. I responded to a knock on the door. When I got out, the Army was everywhere. They separated the male members of the family and started a parade… they asked, ‘Who is the eldest son?’ It was the 22 Rashtriya Rifles counterinsurgency division of the army. They took him in front of us all.

Bilquees and the family were told that Ahmed would be returned the next day, after some questioning. Eight years later, Ahmed has still not returned.

We recognize the men who came that night, we even know their names. We went and asked them and they refused knowing anything about my husband. We looked everywhere, we even rented a shikara [a Kashmiri raft, often seen in glossy tourist photographs of Srinagar’s Dal Lake], in case he was killed and his body thrown in the water.

Bilquees is one of Kashmir’s “half widows:” a woman whose husband has been “disappeared” and never heard from again, leaving her shrouded in uncertainty as to her marital status. Enforced disappearances have been recorded in Kashmir since the early 1990s, and local civil society groups, such as the Jammu and Kashmir Coalition of Civil Society, estimate about 8,000 enforced disappearances and about 1,500 “half widows” in Kashmir.

Now, in August of this year, a State Government agency, the State Human Rights Commission, has announced the existence of “mass graves” in the Indian-administered Kashmir Valley: it has recorded multiple graves containing 2,730 bodies. The report acknowledges that many of the graves contain civilians who had “disappeared”—574 of the 2,730 have been identified as locals—rather than only “unidentified cross-border terrorists” as per the Indian government’s prior claims (even this official position is contrary to the Geneva Conventions, which prohibit torture and mutilation and call for proper burial of fallen combatants). Kashmiris and human rights activists explain these “disappearances” as scare and punishment tactics of the armed forces—not unlike those employed by forces in Punjab or Argentina or Sri Lanka or the Philippines. While the skeletons in mass graves evidence suffering of the past, they are also stark reminders of continued suffering of women like Bilquees, who do not know whether their husbands are in the mass graves or alive somewhere in captivity.

“Half widows” and their children are also an easily identifiable population for those seeking true engagement and change in Kashmir. In response to the mass graves report, Kashmir’s Chief Minister Omar Abdullah has proposed a “Truth and Reconciliation Commission” that will, among other things, “probe the disappearances [and] the issue of half widows.” However, urgent responses to the socio-economic situation of half widows are also needed, whether in the form of self-help groups that provide some financial independence through cottage industry, or scholarships for their school-age children (often removed from even government schools due to inability to pay for stationery or uniforms), or vocational training for them and their children. Similarly, the psychological trauma faced by “half widows” calls for immediate attention, both in the form of accessible medical treatment as well as remedies that provide truth as well as justice for the underlying reason of the trauma—the unresolved “disappearance.”

Attention to “disappearances” is a humanitarian as well as political imperative. The struggles of “half widows” may not make headlines, but their plight is urgent and present. Further, “half widows” represent various forms of insecurity, signify rights violations and stand as a constant reminder of alienation, thus impeding resolution in Kashmir. The current cycles of violence in this strategically vital region will inevitably continue as long as closure remains elusive. “I dreamt of him just last week, walking into the kitchen, hungry for some food,” confesses Bilquees, still holding hope for Ahmed’s return, eight years later.

This post appeared originally at the Guernica Daily Blog and is excerpted here with permission.

Photo of a Kashmiri child clinging to his mother by flickr user babasteve under Creative Commons 2.0.

Mallika Kaur is a writer, lawyer and organizer who focuses on gender and minority issues in the United States and South Asia and teaches at UC Berkeley School of Law. She is the author of “Faith, Gender, and Activism in the Punjab Conflict: The Wheat Fields Still Whisper,” Palgrave MacMillan (2019). She is also the co-founder and executive director of the Sikh Family Center, the only Sikh American organization focused on gender justice. Tweet her @mallikakaur.