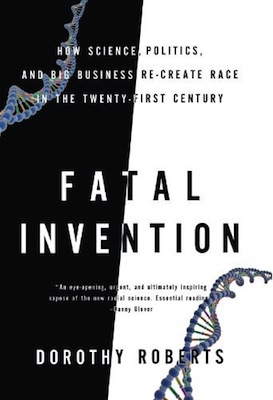 Fatal Invention: How Science, Politics, and Big Business Re-Create Race in the Twenty-First Century
By Dorothy Roberts
The New Press

In 2000, President Clinton and the two leaders of the effort to map the human genome announced their success with a ding-dong-the-witch-is-dead moment: At the unveiling of the initial genome map, biologist Craig Venter made the ringing statement, “Race has no genetic or scientific basis.” Research had finally proven that the notion of racial differences being biologically based was illusory.

Yet ever since, great effort and much money have been poured into biomedical research on the faith that biological differences do indeed correspond with racial identity. In Fatal Invention, social critic Dorothy Roberts traces the long history of race from its invention as a tool of power to the emergence of this “new” racial science. She writes:

What links racial science from one generation to the next is the quest to update the theories and methods for dividing human beings into a handful of groups to provide a biological explanation for their differences—from health outcomes to intelligence to incarceration rates.

This latest concept of biologically based race deploys recent findings in genetics to make spurious claims of racial difference appear neutral, factual and natural. Consider the hypothesis that African American women’s lower incidence of breast cancer but higher mortality rate are caused by genetic inheritance. The hypothesis seems uncontroversial and at least worth testing. Yet it rests on the acceptance of biological racial differences, the same idea used to justify slavery, popularize the early-20th-century eugenics movement and rationalize the Holocaust. Roberts shows that the use of race as a research category is, in fact, controversial among scientists. Step by step, she dismantles the reasons for using race to determine health policy and exposes how embedded social assumptions can shape medicine’s research agenda and distort science.

Roberts also examines the use of “genetic race” in commerce and the justice system. In the name of personalized medicine, it’s used to sell therapeutic drugs, direct-to-consumer genetic testing and gametes for fertility treatment. This commercialization, Roberts argues, may impose a norm of genetic self-regulation that will fall most negatively on those deemed the source of genetic risk. All too often, she warns, that will be women of color. She describes the rapid build-up of government DNA databases, which now include samples not only from convicted murderers and sexual offenders—whose heinous crimes justify the privacy violation—but also those arrested for minor offenses. Given law enforcement’s pervasive use of racial profiling and the role of racial bias in prosecution and conviction, African Americans are disproportionately represented in the databases and, thus, disproportionately suspect.

Roberts acknowledges that there is a place for race in scientific research if it means “devising strategies to end racial inequities in health by changing social policies.” And she accepts that these studies will “require using race, defined properly as a social category, as a research variable and a way of classifying research participants.” But she challenges readers with this thought: “What should link us together is not our genetic unity; we should be bound by a common struggle for the equal dignity of all humankind.”

LISA C. IKEMOTO is a professor of law at University of California, Davis, School of Law, where she writes about reproductive justice and health-disparities issues.

Lisa Ikemoto teaches and writes about race and gender issues in bioethics, reproductive justice, and health care disparities. She has a particular interest in reproductive and genetic technology use and the ways in which social norms shape those uses. Lisa is on faculty at the University of California – Davis School of Law.