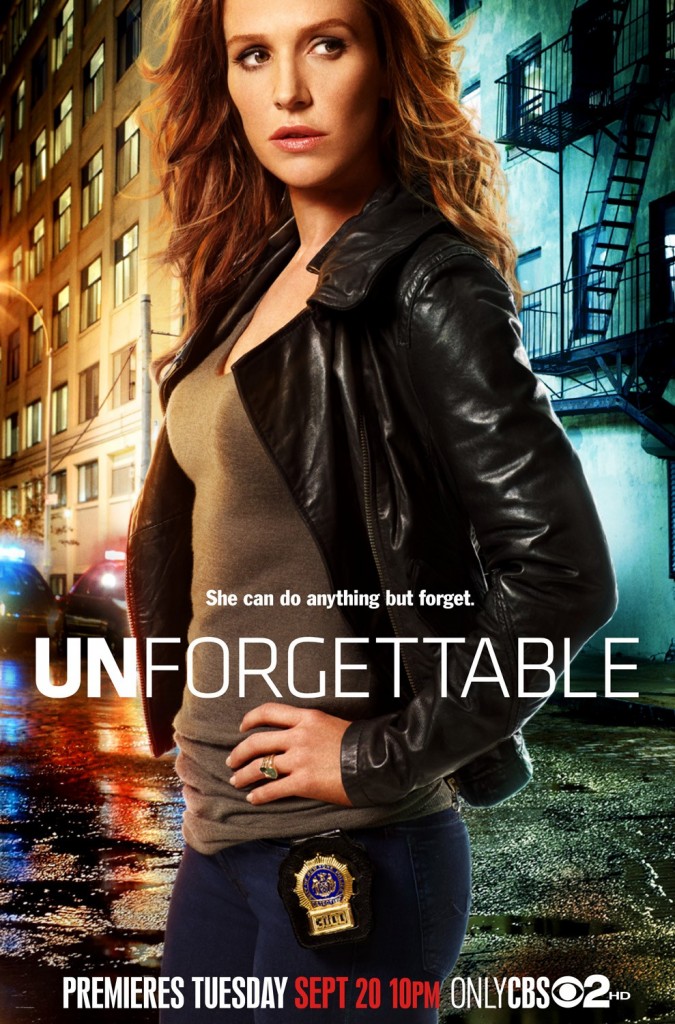 Tonight’s premiere of the new CBS drama “Unforgettable” brings to mind another cable show, “Monk” (2002-2009). “Monk”‘s detective lead had Obsessive Compulsive Disorder (OCD), which was both a blessing and a curse–not very practical for trying to enjoy the ordinary parts of life, but really helpful for catching criminals.

Now CBS riffs on this concept of solving crimes via possible-DSM-IV-diagnosis with a female lead, played by the adept Australian actor Poppy Montgomery (perhaps best known for her work as a detective on another CBS drama, “Without a Trace,” 2002-2009). In this case, it becomes evident right away that her character Carrie Wells, is unusual for one thing: a really good memory. Like really good. To the point of the very rare “superior autobiographical memory,” which was brought to light recently by another CBS program, “Sixty Minutes.” A June show featured interviews with the handful of real-life people known to have this talent. They included another face familiar from TV, actor Marilu Henner, a star of the classic sitcom “Taxi.” Henner is now a consultant on “Unforgettable,” and in an ironic bit of casting, plays Carrie’s aunt with early-onset Alzheimer’s.

Carrie demonstrates her amazing ability early in the pilot when someone asks her what happened on a random March date in 1998. She instantly recalls sports scores and FDA approval of Viagra. At first, it may seem that having a perfect memory would be a blessing. No more lost passwords, pin numbers–or lost anything. But it has also been a burden to Carrie, evidently, as her ex-lover, Detective Al Burns of the NYPD, (heavy-handedly) reminds her:

You can bring your past, your pain, to the table, and if you remember that’s what messes you up.

In the scenes with Al, played by heat-generating and fearless actor Dylan Walsh (of “Nip/Tuck”), Carrie does show her vulnerable side. This is when the show gets the most interesting, showing the human layers of its headstrong lead, transcending the genre of garden-variety network-police procedural.

But Carrie seems less “real”–and less identifiable–when she plays the infallible superhero, such as in the first part of the pilot, where uses her wits alone to fight off a gang of armed goons. The pilot also lapses into staid network-TV formulas with a gratuitous scene of her undressing before bed. I can’t imagine the USA network subjecting Adrian Monk to such pandering gazes.

But the show does stand out with incredible special effects. These are evident in super-cool “time-traveling” scenes where Carrie goes back to observe moments of her life, watching herself undetected and with a new point of view, like the Ghost of Sleuthing Past. She has the ability to zero in on certain key details she may have missed earlier, such as a photograph in the wall.

But for this show to last, producers have to go beyond these special effects and the crime solving, no matter how clever they may be, and focus on the heart of the character. That’s what made “Monk” so lasting–and so hard to forget.