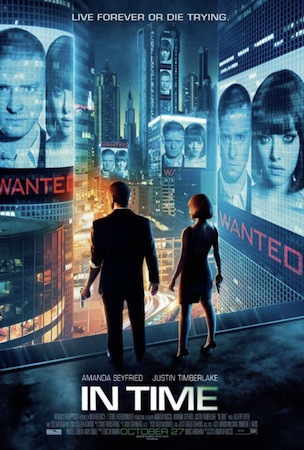 Based on a very timely premise, the new film In Time ironically moves rather slowly over the course of its 109 minutes. Lacking a “time is running out” feel and failing to deliver an edge-of-your-seat “every moment counts” experience, the film instead plods along in its attempt to examine wealth disparity through the metaphor of owning time. The allegorical futuristic dystopia in which the film is set aptly echoes the 99 percent/1 percent split popularized in the Occupy movement, but the narrative itself lacks political punch.

The movie opens strongly with Will Salas (Justin Timberlake) conversing with his mother (Olivia Wilde)–yes, I know their respective ages make that seem impossible, but keep reading–about how they will manage their remaining time so that each can survive the day. As we quickly learn, “time is now the currency.” People are genetically engineered to stop aging at 25 and then given a year on their “clock”–a glowing countdown mechanism embedded in everyone’s arm. When the clock hits zero, one dies instantly, which drives the need to replenish one’s body clock.

In this world of huge wealth differentials, where time is now literally money, the “rich can live forever” and those in the “ghetto” function from minute to minute, scrounging each day to beg, barter or steal enough time to stay alive. The film is saturated with time(ly) references–there are Minutemen gangsters who steal time from others, Timekeeper law enforcers, Time Borders that one has to pay in months or years to cross, 99 Second Shops, hotels with suites that cost two months a night, and Time Missions for the needy that donate time to those starving for minutes.

In a particularly effective early scene, Will’s mother can’t afford the bus fare to get back home from her garment district job–it’s been raised from one hour to two—and she only has an hour-and-a-half left on her body clock. She tries to make it back to Will before her clock runs out, and the two run towards one another, her dead body collapsing into his arms as her clock runs out. The scene evocatively captures the run-for-your-life existence of the “time poor.”

On the other side of the spectrum, the rich have thousands of days on their clocks, and hoard millions of years in the bank. Sylvia Weis (Amanda Seyfried) “comes from time,” as the film puts it, or is one of the lucky few born into immortality–the class that will never run out of time.

After his mother dies, Will crosses multiple Time Borders into New Greenwich, an uber-time-rich zone, and meets Sylvia. The two eventually become a sort of Bonnie and Clyde for the Occupy generation, stealing time from big banks and pilfering minutes from Sylvia’s father Philippe Weis (Vincent Kartheiser), who is the face of the evil 1 percent of the time-rich. Meanwhile, the lead Timekeeper, Raymond Leon (Cillian Murphy), hunts down Sylvia and Will, doing the dirty work for the corporate time holders. However, as the end of the film reveals, Raymond harks from the ghetto himself, echoing the real-life tendency for law enforcement to come from the ranks of the poor and the working class, rather than from the corporate elite the justice system often protects.

Though made prior to the Occupy movement, the “police brutality” thread of the narrative echoes police violence against Occupy protestors. In accordance with these real-life acts of police violence and the repression of protest, in the film, Will has not broken any laws—at least not when he is first targeted by the Timekeepers and the Time Rich who control them. Even when he technically breaks laws by stealing from the time banks, he points out, “How can you steal what’s already been stolen?,” thus suggesting that the real criminals are the Time Rich–much like the Occupy movement is suggesting that the true crime is perpetrated from within the 1 percent.

Though based on an intriguing and very timely premise, the film unfortunately deserves the “Most Obvious and Pun-Filled Allegory” award given in CNN’s review. As it notes, the “brutally fascist world” depicted in the film ultimately “doesn’t say much, except in the simplest It’s-bad-when-rich-people-hoard-resources fashion.”

I agree that so much more could have been done with the idea, but instead of a modern-day 1984 or Brave New World—or even a V for Vendetta for the Occupy generation—what we end up with is more of a sexy robber-duo heist. Granted, the film does a nice job portraying Sylvia and Will as equal partners in crime, but any examination of how gender, race, class, (dis)ability, beauty or other markers of social difference affect one’s “time” are virtually non-existent. Further, as also noted in the CNN review, Sylvia’s  “’rich girl with a rebellious streak’ isn’t as well-developed a character as it could be”:

It’s never really clear if Sylvia’s transition from slightly rebellious rich girl to full-on criminal is due to her belief in Salas’ Robin Hood-esque cause or to her having the hots for him.

While it seems to be a bit of both, it would have been nice if the film had grounded her rebellion, as well as Will’s, in political gumption and activist intent. Instead, each character just happens into his or her rebellious role. Though the film indicates Will’s father was a rebel trying to bring down the time system, Will and Sylvia don’t seem to have a specific agenda; instead, they steal time from the rich to give it to the poor, and look damn good doing it.

Sure, Sylvia believes “The clock is good for no one. The poor die and the rich don’t live,” but the message audiences are left with is that the best way to live is not to try to radically change the system or incite mass revolution, but to strap on high heels and a weapon and steal from the time banks. The film closes with Sylvia and Will poised to achieve their biggest “time heist” yet. If only the film had instead taken the time (OK, guilty as charged) to offer a more politicized, deeper message–one that now hovers under the surface but never quite manifests. Ironically, one comes out of the movie feeling it wasted it’s own time.

Poster for In Time, directed by Andrew Niccol, via IMPAwards