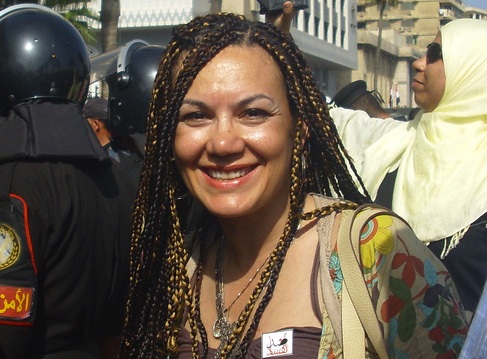 When post-revolution Egypt holds presidential elections next year, Bothaina Kamel is set to become the first woman in the country’s modern history to run for the highest office. Although she knows her chances of winning are slim to none, she says she’s doing it out of principle.

“I intend to run for president to show the world that Egypt is a modern country, in which women are afforded the right to vie for the highest positions of state, which – like the right to vote – is a basic human right,” Kamel, a 49-year-old television presenter, told IPS.

As Egypt gears up for its first post-Mubarak parliamentary races late next month, the exact date of presidential elections remains unclear. But the Supreme Council of the Armed Forces (SCAF), which has governed the country since Mubarak’s February ouster, has vowed to conduct presidential polls by 2013 at the latest.

After getting a start on state radio, Kamel later worked through much of the 1990s as a presenter on state television. In 2005, following a controversial referendum on constitutional amendments, she became politically active.

Kamel soon became an ardent member of the Kefaya protest movement and a vocal critic of the Mubarak regime. “I participated in numerous demonstrations and marches, especially those against official corruption,” she said.

When Egypt’s game-changing revolution erupted in January of this year, Kamel says she was there from the very beginning. “I was in Tahrir Square (the epicenter of the popular uprising) on January 25, the day the revolution began,” she recalled.

Following Mubarak’s departure, Kamel returned to work at Egyptian state television, but says she was “marginalized” by her superiors because of her refusal to simply read off the teleprompter. Since then, she says she’s been questioned three times by military authorities, most recently after she openly criticized Egypt’s ruling military council.

Kamel says she drew her inspiration to run for president from the courageous young activists – including numerous women – whom she met during the course of the 18-day uprising that culminated in Mubarak’s ouster.

“I have great deal of confidence in Egypt’s young people; their ability to lead the country in the coming period,” she said. “Women played a major role in the revolution, and many fell as martyrs. Now, hopefully, women will play a more active role in national politics than they did in the past.”

According to figures released by the non-governmental Cairo Centre for Development, participation by Egyptian women in national elections between 1981 and 2010 stood at a mere 5 percent. During the same period, women sat on only 2 percent of the seats in parliament, while fewer than 5 percent of the seats in Egypt’s municipal councils were occupied by female representatives.

Although she espouses a liberal outlook, Kamel is not affiliated with any of the many liberal political parties that have come into being in the revolution’s wake. Planning to run on an independent ticket, she says her political platform will focus on securing the rights of “all disenfranchised Egyptians.”

“I’m not running simply for women, but for marginalized Upper Egyptians, Nubians, Bedouin tribesmen, the poor, the elderly, the disabled,” Kamel said, noting that her political programme would focus mainly on “combating corruption and unemployment.”

The biggest challenge to Kamel’s planned presidential bid lies in the fact that in majority-Muslim Egypt, most of the population–both men and women–largely discount the idea of a female head of state. Some Islamist parties and groups, especially the influential Muslim Brotherhood, reject the notion on religious grounds.

According to Essam al-Arian, vice president of the Justice and Freedom Party (JFP), the Brotherhood’s recently-licensed political arm, there are two schools of Islamic jurisprudence on the issue.

“Some jurists say it’s permissible to have a female head of state, and others say it is not. The Brotherhood believes it is not,” al-Arian told IPS. “We support a woman’s right to education, to employment, even to become a member of parliament or government minister – but not to occupy the position of national sovereign.

“But that’s our position and not that of the state,” he added. “Of course she has the constitutional right, along with all Egyptian citizens, to run for the presidency. This simply means that, while the Brotherhood chooses not to field a female presidential candidate, it certainly won’t stop others from doing so.”

Although poised to prosper in upcoming parliamentary polls, the Brotherhood’s JFP has opted not to field a candidate in next year’s presidential election.

“Bothaina’s presidential bid will boost Egypt’s image as a modern, civilised country,” al-Merghani told IPS. “Even if she doesn’t win, she will have opened a new door for the advancement of women – not to mention having had the honor of being the first Egyptian woman to vie for the presidency.”

Kamel, for her part, is optimistic.

“When I talk to the people – even in bastions of tradition, like Upper Egypt and the Nile Delta – the fact I’m a woman makes little difference,” she said. “What’s important is that I hear their perspectives and understand their problems.

“I’m fully aware of the patriarchal nature of Egyptian society,” Kamel added. “But I believe I’m capable of leading the country’s more than 80 million people; of leading a county of Egypt’s longstanding political and cultural weight.”

ABOVE: Photo of Bothaina Kamel from Flickr user eimannosho under CC 2.0.